By 2010, downtown will be a different place, thanks to an unprecedented swath of new development—museums, skyscrapers, hotels, parks, a ballpark, and one big shiny Hall of Fame 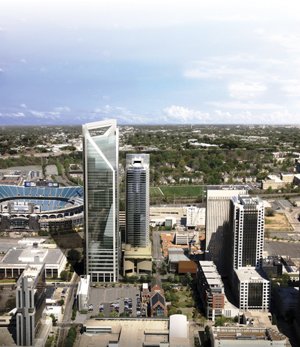 This is what Charlotte does. It builds things.

Right this very minute, even in the face of a bleeding economy, thousands of workers are furiously constructing the most ambitious, most transformational series of uptown developments that this city has ever seen. Two years from now, when projects like the NASCAR Hall of Fame and the Wachovia cultural campus are complete, Charlotte will be a changed city.

For now, it takes a little imagination and a seat on a bench at the front of The Green, the fanciful pocket park at South Tryon and First streets downtown.

Look across Tryon. That will be a public plaza, heart of a new cultural campus and home to art installations and crowds day and night. To the right, the future Bechtler Museum of Modern Art is today a rust-colored erector set, its top floor seemingly propped up by, well, nothing. Behind it, the future Knight Theater is covered in scaffolding. Its only patrons wear bright yellow vests and white-and-brown hard hats. To the left of the plaza, ground has broken on the future Mint Museum Center City campus. A forty-two-story condominium tower will rise above it.

Farther to the left, sparks shower as workers saw steel beams on the future Wachovia Corporate Center. A million and a half square feet of office space will house Wachovia's headquarters and trading floor, as well as several other companies. The tower will soar to forty-eight stories, making it the second tallest in the city.

That's not all. Look through the scaffolding of the Knight Theater. That half-finished building covered in blue glass is Catalyst, a condo tower that will soon reach twenty-seven stories. Behind it will sit the five-and-a-half-acre Romare Bearden Park, which will lead baseball fans to the new Knights stadium. In any given direction, more condo projects are coming to life.

There's more. Look over your left shoulder. If you could see through that gorgeous little church, you'd be looking at a long skinny shell that runs all the way along Stonewall Street. That'll be the new Harvey B. Gantt Center for African American Arts and Culture. Part museum, part gathering place, it'll be the gateway to this new cultural campus.

Turn all the way around and gaze over the top of the Convention Center. That's the twenty-story office tower that'll occupy the southwest corner of the NASCAR Hall of Fame complex. The Hall itself, along with a huge new Convention Center ballroom, is just now starting to form around the base of the tower.

This. Is going to be. Awesome.

"What we have here," says Michael Smith, president of Charlotte Center City Partners, "is a defining moment for Charlotte."

A decade ago, Charlotte urban strategist Michael Gallis became a local antihero when, while walking with a newspaper reporter, he
couldn't find a Snickers bar downtown. Now, he looks at what is happening and remarks, "clearly Charlotte is emerging as the capital of the Carolinas. It's really starting to come of age as a major American city."

If that all sounds over the top, well, maybe it is. But only a little bit. Consider this: by 2010, when all of the new projects should be up and running, the center city will be able to claim 14,000 full-time residents and 75,000 day-time office workers. Those people and everyone else, as well as hundreds of thousands of tourists, will be able to visit five attractions that are unlike any others in the country: the NASCAR Hall of Fame, the Bechtler, the Mint Museum of Craft + Design, the Gantt Center, and Levine Museum of the New South. In a city that in the past has relied on borrowing ideas from other places, this is significant.

There's substance behind the flash. Downtown Charlotte will gain a richness in scale it has never had. "You're going to have a significant infill of the high-rise texture of downtown," says Gallis. "Which is going to transform it from a few isolated towers into a high-rise urban village."

But we're not done yet. To truly earn the moniker "major," downtown needs more stores. Big stores. Name stores. "The real next stage is going to come back to what has always haunted downtown, and that is the retail," says Gallis. "The museums are great and they offer diversity, but what people like to do is they really like to shop. Most really vibrant downtowns are marked by the amount of retail shopping. We haven't seen that emerge yet downtown."

Charlotte Center City Partners commissioned a study that found downtown could support an additional 240,000 square feet of retail right now, and more than 800,000 by 2020. It has ambitious plans to make that happen. Do we hear Dolce & Gabbana? Barnes and Noble, anyone?

This article appears in the June 2008 issue of Charlotte magazine.
Categories: Feature, The Buzz