How the DNC plans to raise $36 million by September

The Democratic National Convention host committee has $36 million to raise by September without the help of corporations, lobbyists, or unions. So how will they do it?

The Democratic National Convention has its demands. Thirty sets of keys to the media center. A teleprompter. A podium. Water. Coffee. Balloons. Confetti. Somebody has to pay for them, of course. Charlotte’s host committee hopes it’ll be you.

The hosts have no access to federal funds, and thus have to raise more than $36 million by next September. Executive director Dan Murrey says the cash will pay for shuttling delegates around and making sure the media has plenty of space. They will also have to write the checks to fix up Time Warner Cable Arena.

Here’s the catch. Under its contract with the Democratic National Committee, the host committee can’t take money from for-profit corporations. Lobbyist donations are also off-limits. So is cash from political action committees and unions. Individuals, however, can donate up to $100,000. In essence, the host committee has to get a different person to fork over the maximum amount every day for a year to hit the $36 million goal.

Murrey says the grassroots idea is based on Barack Obama’s 2008 model: small amounts of money from a huge amount of Internet donors. In this case, the money’s going to production and construction, not the candidate. It’s a tough sell, says Timothy Hathaway, CEO of Activist Manager, a firm based in northern Virginia that builds apps to help politicians raise money. “Small-dollar donors give to candidates and causes,” he says, “not renting buses to shuttle people around.”

Hathaway says if the fundraising falls flat, people watching on television won’t notice, but the delegates in attendance will. Those are precisely the people the host committee is trying to impress. Think about how nitpicky people get when they leave a review on Yelp. Now imagine that magnified, in person, tens of thousands of times, right in the view of a goliath gaggle of media from across the world. Better make sure the coffee is hot.

Obama’s message was hope. Murrey’s message is help. He’s cluing in potential donors about the DNC’s self-imposed rules, and why they’re important. Charlotte could set a fundraising example for years to come, he says. And he believes that people will help, because at heart, Charlotte is still a tight-knit community in big-city clothes. “We’re gonna be ready for it,” he says. Or, to put it another way: Yes, we can.

Is there a way to get around the rules?

Sure. “Rather than [coming] directly from the corporate treasury, [donations] will be from senior people in the company as individuals,” explains Timothy Hathaway. The DNC’s contract says businesses aren’t allowed to come to you with a pile of cash for you to donate on their behalf. The DNC can, however, specifically allow certain groups and foundations to contribute.

What’s it pay for?

Construction and production are the largest costs, but the host committee has to pay for a whole host of things, including:

Things to Fix Before the DNC: Dead Tree in a Vacant Building 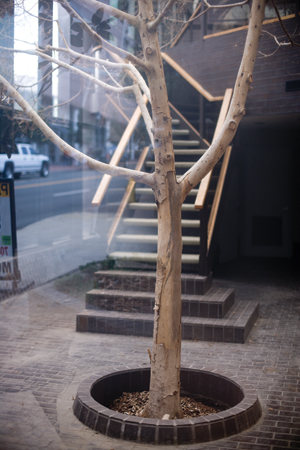 Quick: What’s brown and deciduous and lost its life during the real estate downturn? This ficus tree. It is stately. And dead. It was once a leafy and sprawling centerpiece of the atrium in the old Charlotte Visitor’s Bureau on East Stonewall Street (now across from the Gantt Center). When the last tenant moved out, the tree dried up, turning its trunk and tendrils into a macabre piece of tinder art.

Will It Be Fixed? Likely. The building’s owner, who had just plumb forgotten about the tree, said he’d probably cut it down, thus providing an employment opportunity for lumberjacks who prefer to work indoors.

This article appears in the November 2011 issue of Charlotte magazine.
Contest of the Month