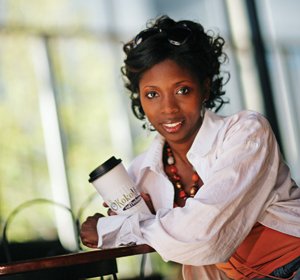 Hagans opened KokoMo’s Coffeehouse in uptown in May, in hopes of tapping into the growing scene of working professionals and their desire for coffee. – Chris Edwards

It’s a rainy Friday afternoon in uptown. It hasn’t rained this hard in a long time, so the heavy downpour is catching the people maneuvering across the intersection of Fourth and McDowell streets off guard. With very few umbrellas in sight, several of them dash sporadically into KokoMo’s Coffeehouse. Once they’ve retrieved their lattes and pastries, they run back out into the storm. If torrential rain won’t stop the patronage, business must be good for owner Tiwanna Hagans, who greets several of the customers by name.

"I like to host, I like to entertain, I like to have conversations with people," says Hagans, thirty-four. "I found a place that lets me be who I am."

Hagans opened this location of KokoMo’s (derived from her nickname, Koko) in May, across from the new county courthouse, after opening the first one in Huntersville in 2005. "Like anything new, it can be overwhelming and complicated, yet exciting and interesting," she says.

Hagans, a D.C. area native who graduated from Johnson C. Smith University in 1994, moved away and returned to Charlotte in 2004. She says the reason she returned, after working as a police officer for ten years, was because she recognized that Charlotte had a better quality of life and a lot of opportunity. Soon after moving back she found her niche.

"I asked a girlfriend of mine where the coffeehouse was, and she said there was a Caribou about six miles down the street. A lot of the places in Charlotte are franchises, part of big corporations. Or if there’s a cool local place, there’ll be just that one."

After the success of her Huntersville coffeehouse, which she says caters to the many stay-at-home moms who live nearby, she felt a location uptown would appeal to the professional crowd. Not only can they get coffee over conversation during the day, but they’re treated to entertainment such as live jazz on selected nights.

Uptown can be competitive, but Hagans says her biggest challenge has been finding employees who can carry out her vision. In fact, on this rainy afternoon, her manager is running more than an hour late.

"You have to find people who represent the business the way you want them to. They have to have your same energy and mind-set. I’m not a franchise. It’s just me and my ideas.” Go to www.kokomoscoffee.com to see what Hagans has brewing.

This article appears in the October 2007 issue of Charlotte magazine.
Contest of the Month