The Rivalry – Independence vs. Butler 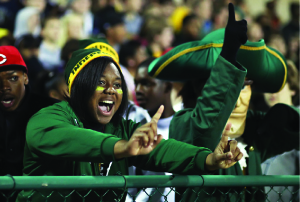 In Charlotte high school football, there is no bigger rivalry than Independence and Butler. The two schools are located on Charlotte’s eastside and draw students from adjacent neighborhoods. Independence has won seven state titles in the last decade, while Butler, perhaps best known for a former cheerleader named Brooklyn Decker, is the upstart.

Last season, the teams played twice, once in the regular season and again in the playoffs. Butler won both on the way to a 15-0 season and the state championship. This season, Butler is riding high again, while Independence is struggling a bit. Still, the November 5 matchup at Memorial Stadium figures to be the year’s hottest ticket. We captured the scene at last season’s regular-season game.