It serves sweet and savory bites with international flair

La Dolcezza Bakery Café is easy to miss between the reflexology spa and nail salon on Montford Drive. But it’s tough to forget once you’ve been inside.

Vintage signs and images of Paris line the magenta walls. Crystal starburst chandeliers hang from the ceiling, and a life-sized pink phone booth brims with artificial flowers. Beside the coffee bar, a cabinet holds a deluge of mismatched teacups and saucers; at the entrance, a pastry case overflows with Dragon Fruit Cannolis, Raspberry-Pistachio Tres Leches, and Lemon Meringue Cheesecake. The menu beside the register lists a selection of sandwiches and brunch items as well. 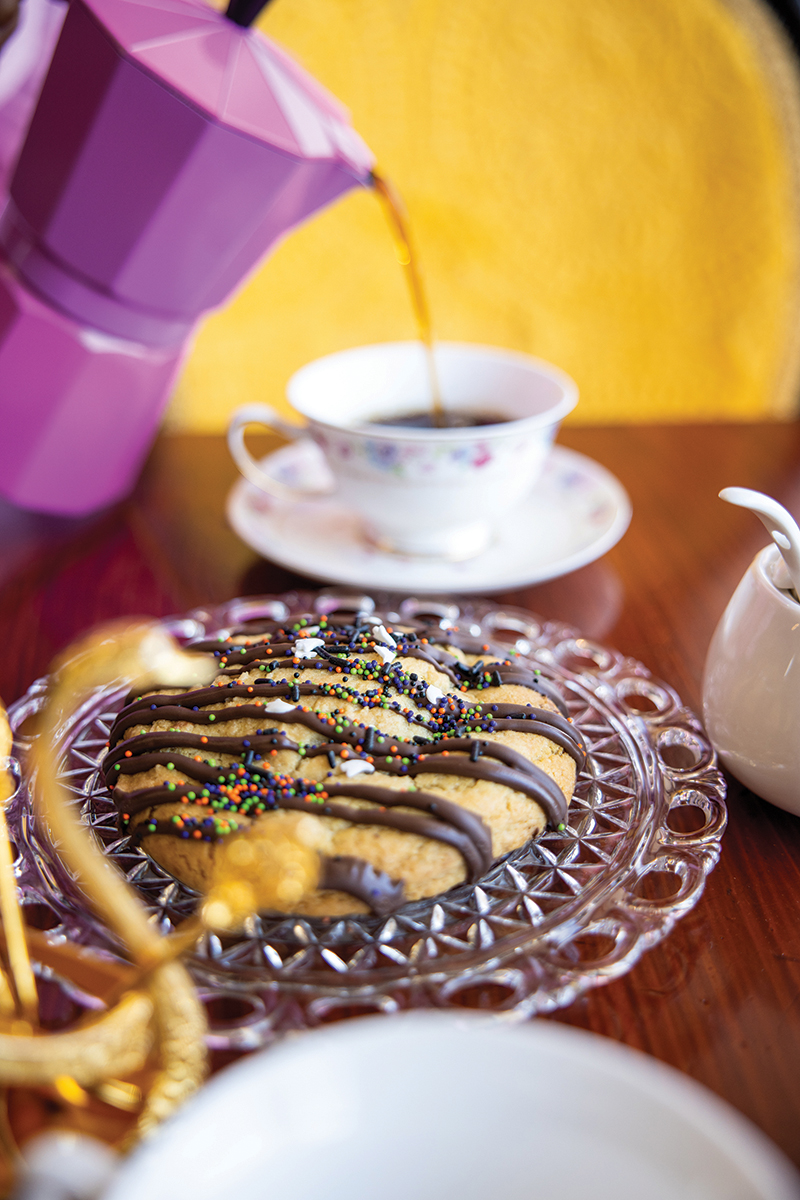 La Dolcezza’s signature Nutella-Stuffed Cookies and coffee from the Dominican Republic (above); Pumpkin Tres Leches (below).. 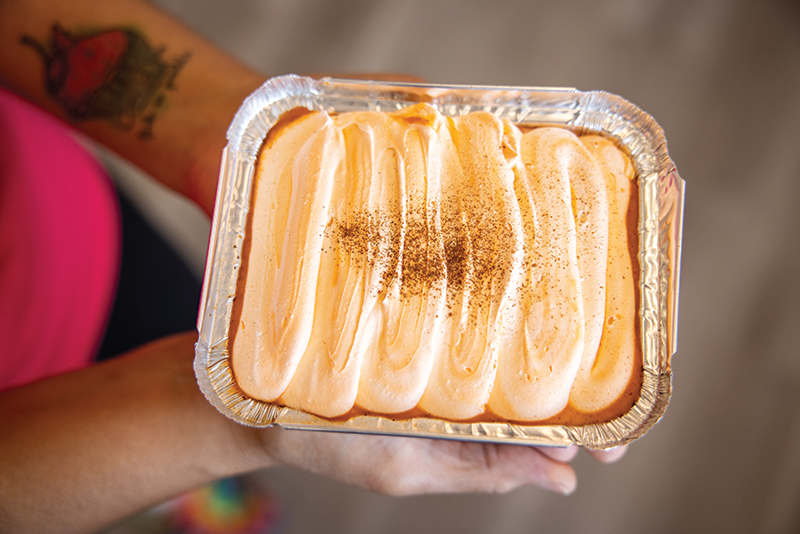 La Dolcezza, Italian for “sweetness,” is a longtime dream for owner Karina Cooper, 42, who opened the bakery and café in August. Cooper grew up in the Dominican Republic, across from a bakery where she often watched the pastry chefs at work. “It was so close, we shared a patio,” she says. “I could always smell the sweets, and I wanted to try everything.”

Cooper came to the U.S. in 2001 and settled in the Bronx, where she had her second and third daughters. Eight years later, she wanted a warmer climate and a quieter place to raise her girls, so she moved her family to Charlotte. She worked various retail jobs and became a manager at Lancôme, but she always baked in her spare time. “I’m mostly self-taught, but I went to Paris and took a master class for cakes, desserts, and chocolates,” she says. “I went to Miami for classes on cake pops. Every place I go, I take classes.”

Her pastry case is like an edible passport, full of recipes and flavor combinations she’s picked up and honed along the way. “My mom’s grandfather is French, and my last name is Cooper, so we’re a mix in my family,” she laughs. “My mom lives in New York, but she’s married to an Italian guy, so she spends a lot of time in Italy, too. That’s why we love pasta and have panna cotta and cannoli on the menu.” 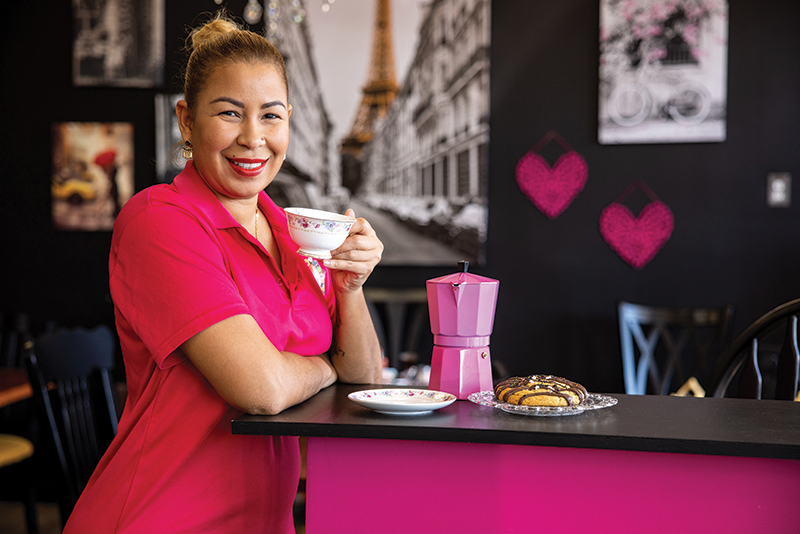 “I always wanted my bakery to be European-style,” Cooper says. “I want it to feel like you’re in Paris.”

Cooper started baking specialty cakes 20 years ago, anything from elaborate wedding cakes to custom creations modeled after designer purses, superheroes, buckets of beer, and a red Cadillac. “The lady that ordered (the Cadillac) sent me a video, and her husband’s reaction brought me to tears,” she says. “Money can’t buy that reaction when he got that cake.”

As she got more serious about opening her own bakery and café in Charlotte, Cooper taste-tested her way through Europe. “When I went to Paris for the first time, I fell in love,” she says. “The pastries, the vintage decor … all of it.” A pistachio-raspberry tart in London remains her all-time favorite flavor combination. In Spain, she found teacups and saucers for her coffee bar and brought back a bottle of vanilla that she still swears by. “I’ve been collecting things for so many years for my bakery,” she says. “I’ve just been waiting for the right time.”

In May 2022, Cooper signed the lease on the former Jet’s Pizza space in Montford. Over the next three months, she installed new kitchen equipment, added a coffee bar, and transformed the dining area into the European-inspired eatery she’d always wanted. 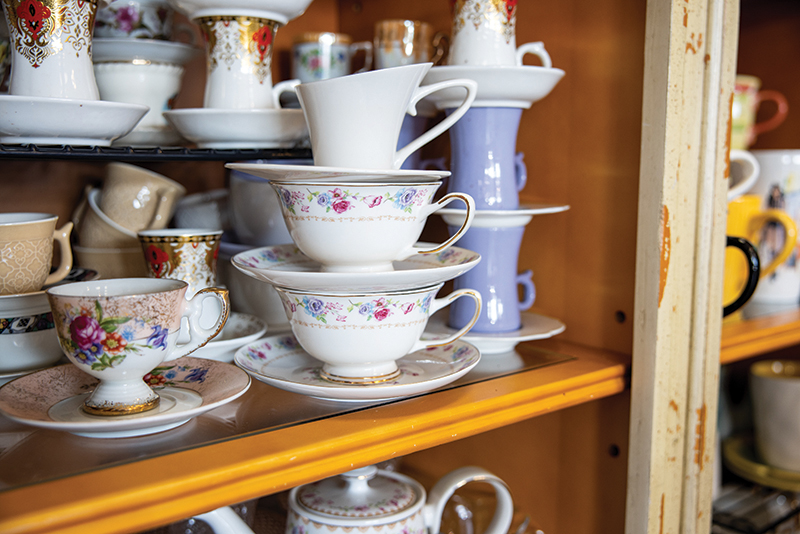 Cooper stocked the coffee bar with teacups and saucers she brought back from Spain.

The café menu is a true global mashup, with savory items like Shrimp & Grits, Empanadas, and Chicken Wings coated in her family’s chipotle sauce. She also serves a Chop Cheese Sandwich, popular in New York City bodegas, that she’s stuffed with ground beef, onions, and melted cheese. “People from the Bronx know,” she says. “When they eat it, they feel at home.”

The bakery menu includes a rotation of fruit tarts, cinnamon rolls, sliced cakes, and Cooper’s signature Nutella-Stuffed Cookies. You can usually count on Tres Leches in the pastry case, but it might be pistachio, coconut, or passion fruit depending on the day. Panna Cotta could be lemon or hazelnut, and cookies range from lemon-berry to banana-chocolate and cinnamon. “I love flavor combinations,” she says. “I taste this, I taste that. Chocolate and orange, lemon and cardamom, pistachio and raspberry. I don’t like just chocolate or just vanilla. This is an international bakery and café, so it’s about layering flavors.” 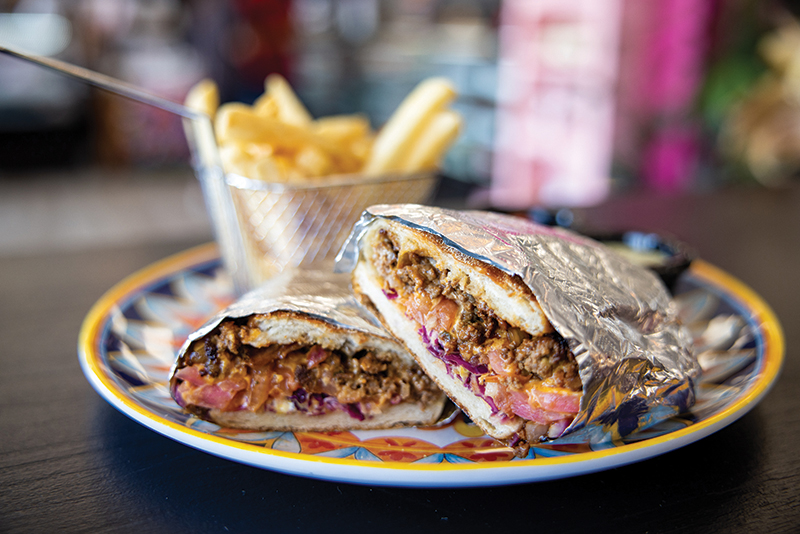 The café menu includes a Chop Cheese Sandwich, made on a grill with ground beef, onions, and melted cheese.

Her daughters, now 14, 15, and 24, help out at La Dolcezza, too. “One daughter is the cookie queen,” she says. “One does the drinks, and my oldest does the food and cooking.” Cooper still takes custom cake orders but limits it to five or six a week while she gets the bakery and café running smoothly.

“This is my first baby, but there’s more to come,” she says. “I’d love to have more locations in Charlotte. But I want to make sure that everything is right. That’s my weakness—everything has to be perfect.”