What makes Dan Nguyen embrace everyone as family?

When patrons walk through the bamboo-lined entry into Lang Van, a squat, cozy Vietnamese restaurant in east Charlotte, they often hear owner Dan Nguyen before they see her: “Hello, my love!” It’s a common greeting from her, even to people she doesn’t know well.

Nguyen is a tiny woman. Her ponytail peeks like a periscope from behind the back counter. Her English isn’t great. But cooking transcends cultures and languages. She joins me in a booth. I’m not here just to eat, although the food is some of the best in the city. I want to know more about her.

She smiles, laughs, and waves the request away. “My story boring.” She asks what I want to drink. There’s water on the table, but she’s on her way back to the kitchen. “I get you Vietnamese coffee,” she says over her shoulder. She returns with intensely sweet coffee in a Styrofoam cup, then asks: “You want something to eat? You like rice or noodles?” She’s off to the kitchen again and comes back with two Styrofoam boxes of food.

Finally, from behind a pile of white takeout containers, she says she was born in Saigon in 1974, a year before the North Vietnamese communists overran the South and renamed the capital Ho Chi Minh City. She married a man named Tuyen Tran in 1994. He left for the United States and eventually moved to Charlotte, and she saved enough money over five years to join him here in 1999. 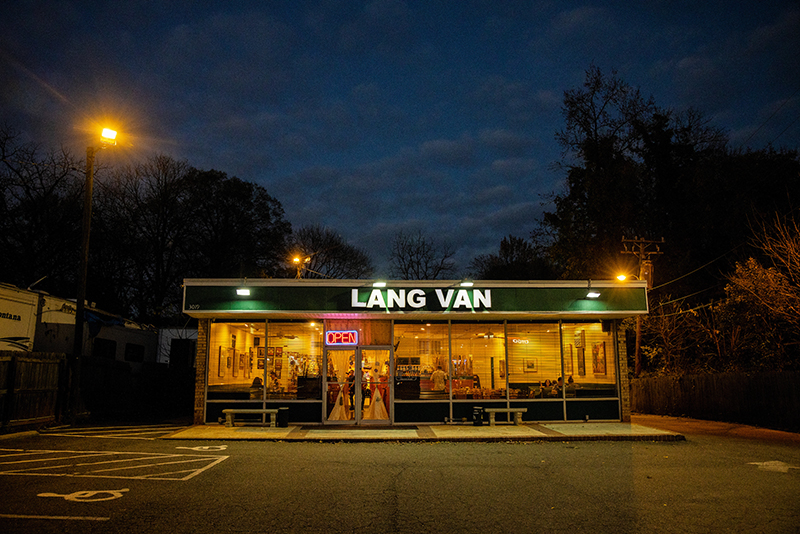 The dinner hour at Lang Van (above). Brandon Swiderski (below, right) thinks of Dan Nguyen as his second mom. 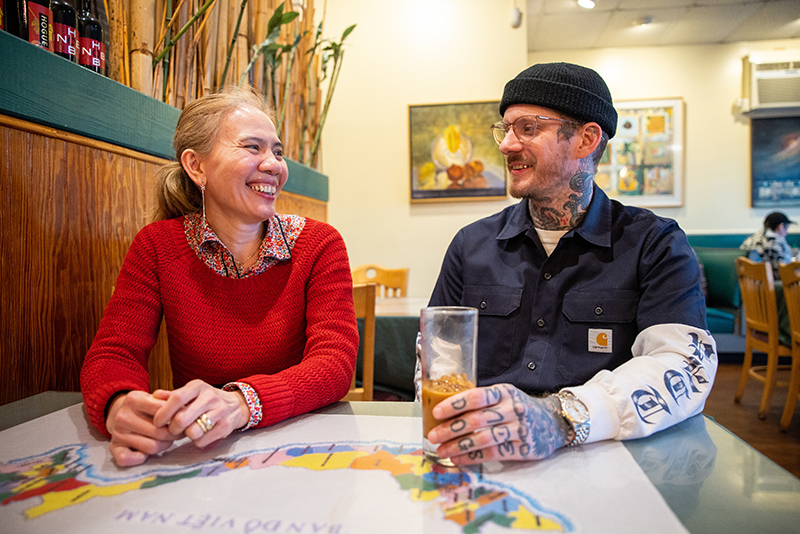 Three days later, she began work as a server at a Vietnamese restaurant. She made $33 a day. Eventually, she saved enough to buy the green-and-white restaurant at Shamrock and Eastway drives. She prides herself on treating her customers like family.

Nguyen skirts around the subject of Vietnam, referring to it, vaguely, as “my country.” When I ask her what growing up there was like, she begins to cry. She allows that, yes, her family was very poor. But that’s all she’ll say.

Her son, Henry Tran, is a 22-year-old N.C. State student. As a kid, he was a fixture at Lang Van, drawing pictures for customers. “She was poor,” he says, “all-the-way dirt-poor.” Even Henry doesn’t know everything. His mother keeps some memories from him and his sister, Alice.

When Henry was in sixth grade, Nguyen took Alice and him to meet their extended family in Vietnam. “She kept on crying every night,” Henry says. “It brought back really, really bad memories.” Nguyen hasn’t returned to Vietnam.

“I think, maybe, before I come to America, I don’t have money, nothing, you know?” Nguyen says. “And so I work, work, work. My customers come back, eat, and they help me. People help me a lot.”

In her view, she’s just returning the favor. Robin Tynes-Miller, the artistic director at Three Bone Theatre, was a regular at Lang Van before the pandemic. Recently, she went back with her husband, Scott, and their baby daughter, Nora. It had been years since she had seen Nguyen. Surely she wouldn’t remember.

But she did, and she embraced Nora as if she were one of her own. “Dan immediately fell in love with her, doting on her, speaking to her in Vietnamese,” Tynes-Miller says. “It was so awesome.”

As the family of three finished a Lang Van meal to celebrate Nora’s first birthday in May, Nguyen returned to the table and told them to come back tomorrow. “We were like, ‘Yeah, but you say that to everyone all the time,’” Tynes-Miller says. They waited a few weeks, until they began to crave the make-your-own spring rolls. When they walked in, Nguyen immediately exclaimed, “You guys have been too long! I have something for you.”

Nguyen ducked into the kitchen and emerged with a bag she’d kept since their last visit. Inside was a white sweatshirt covered with rainbows and a pair of blue overalls speckled with tiny white hearts.

Tynes-Miller pauses, as if she can’t believe this part: Nora was wearing overalls that day. Nguyen had never seen them on Nora. Somehow, Nguyen had bought the same brand of overalls—a size larger so the 1-year-old could grow into them. Nora’s mother can’t explain it. “She’s just magical like that,” she says.

Other longtime Lang Van patrons tell similar stories. Brandon Swiderski, the heavily tattooed manager of Made To Last tattoo studio in Fourth Ward, has eaten at Lang Van every other week for 17 years—half his lifetime. “Every time I go in there, we hug and say, ‘I love you,’” he says from the stairs of his studio.

Swiderski calls Nguyen his second mom. He delights in bringing his first mom in to see Nguyen and in how, every time, she sends them off with a bottle of wine and a box of cookies. He laughs as he describes when he and Nguyen finally exchanged phone numbers. The next time Swiderski came in, she was angry.

“You haven’t answered my texts!”

She’d gotten a digit wrong. Swiderski never got the messages she’d sent about the boots and cologne she bought him for Christmas.

When the pandemic hit and restaurants had to survive on takeout, if at all, Swiderski immediately went to Lang Van and offered to start a fundraiser. Someone else already had, setting a goal of $30,000. (As of November, it had raised more than $63,000.) Instead, Swiderski made 200 Lang Van T-shirts and raised $6,000 for the restaurant. He urged Made To Last’s tens of thousands of Instagram followers to give generously, and they did.

She gives, they give back, she gives more, they give to her, and on it goes. Nguyen has affixed hundreds of Christmas and thank-you cards to one wall at Lang Van. Families send these to Nguyen every year. There’s even one from a dog. The cards thank her for her generosity, her spirit, for simply being her in a world with few people like Dan Nguyen.

One, from a little girl named Finley, scribbled in gangly, elementary-school pencil script, stands out: “Dear Ms. Dan, I miss seeing you. Thank you for always thinking of me, especially at my birthday. Thank you for the gift card. I love you.”

Jared Misner is a Charlotte writer whose work has appeared in The New York Times, The Chronicle of Higher Education,The Knot,Our State, and other publications.