Barvecue makes plant-based items that vegans and omnivores can enjoy

Werner dutifully smokes it, slathers it with sauce, and shreds it. The only difference between Werner’s recipe and traditional barbecue? There’s no pork. It’s vegan, made from wheat and soy protein powder.

“With a little science and magic, it becomes fibrous. We take that and treat it like barbecue,” Werner says. “We smoke it, sauce it, pull it, and try to keep it as much like pork as we can—except without the pig.”

Along with Lee Cooper, Werner owns Barvecue, a Cornelius-based wholesale kitchen. Since last year, they’ve sold plant-based “barbecue” to retailers like Earth Fare, Berrybrook Farm Natural Foods, and a number of other natural food markets as far away as Vancouver, British Columbia. 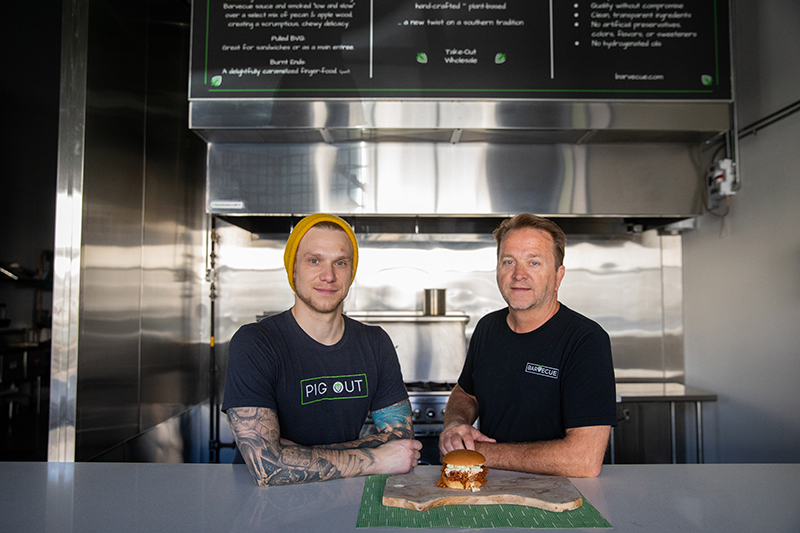 Cooper runs most of the business side of Barvecue, while Werner—who has a degree in food science from Michigan State University—cooks and creates the recipes. While their clientele includes vegans and vegetarians, they serve quite a few omnivores, too.

“We wanted to create great-tasting, high-quality food,” Cooper says, “that just happened to be plant-based.”

It wasn’t always this way, of course. In 2017, Werner was selling trailers, and Cooper had just sold his industrial valve company. Werner’s wife, Andy, is a special education teacher, and she works with Cooper’s daughter, Ana. The two were introduced and got to talking (over food, of course) and decided to start a vegan barbecue company. A month later, the pair applied for trademarks.

Werner tried tofu (too crumbly, too soft), jackfruit (not nutritious enough), and a dozen sauces before he found the combination, texture, and taste that could mimic North Carolina barbecue. They wanted it to appeal to everyone, not just vegans.

I’ve nixed meat from my meals since 2002, and I went vegan in 2008, so getting me on board with vegan pulled pork wasn’t hard. But what about a meat-eating Charlottean? In a state fueled by barbecue and divided by its sauce, I wanted to find out: Could a vegan and a meat-eater put aside their diet differences for a meal?

On a rainy day in March, I met a friend at Barvecue’s industrial-sized kitchen for some good, ol’-fashioned vegan barbecue.

Barvecue offers only takeout, but, on this wet day, Werner and Cooper told us to grab a stool and stay awhile. Soon, we each had a heaping bowl of stringy, caramel-colored “meat,” coleslaw, sauce, and two Asheville-baked hamburger buns in front of us.

We got to talking about what two new friends in Charlotte always do: their jobs, their kids (dogs, on my part), how they ended up here, and why they decided to stay. She asked me, like most non-vegans do but vegans never do, where do I eat in Charlotte? What do I cook for dinner?

I told her I go everywhere she goes. Vegetarian options are everywhere nowadays.

The owners sat down to chat with us, and my meat-eating companion said she wouldn’t know the difference if they had told her this was actually pulled pork instead of soy fibers masquerading as meat.

We chatted more about her children, we laughed a lot, and then she whispered to me that Barvecue’s thin sauce was too sweet for her.

I exhaled, glad I wasn’t the one to say it first. I, too, prefer thick, slow-as-molasses, ketchup-heavy sauces, and this was not that.

No matter how different we are, if we prefer pork from pig or powder, there are still some things on which we can all agree.