Brian and Stacy Pace loved the cozy home they found in Myers Park when they moved to Charlotte in 1996. The neighborhood, originally called Forest Park, was established in the 1940s. Filled with grand trees, quiet, kind neighbors, and a true sense of local history, it was the perfect place for Brian and Stacy to establish their new Charlotte life together. 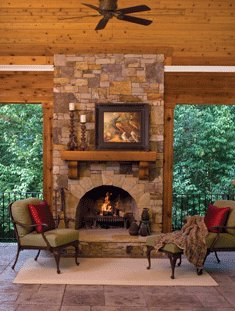 The Paces transformed their circa-1940s Firest Park home into an traditional stunner with amenities such as this open air patio.

But ten years later, they discovered their idyllic abode had a catch: with two daughters, Allison and Hadley, growing up quickly and a new baby girl, Jessica, on the way, they were simply running out of room. After Hadley was born, Brian added a garden suite to the house, which added an additional 500 square feet to their existing space, but they would soon outgrow it. “It became quickly apparent that if we were going to have room for three energetic little girls and a dog, we were going to have to move,” Brian says.

They looked at newer houses in south Charlotte, but their search was in vain. They had fallen under the spell of their neighborhood’s good schools and spacious parks. Fortunately, fate was on their side, or more precisely, across the street, in the form of a small cottage house owned by the Furman family.

The Furman home was barely 100 square feet larger than the Pace house, but it also had almost an acre of land behind it and a curtain of trees that provided supreme privacy. As a partner with Pace Development Group Inc., Brian has worked on many custom home communities and developed new neighborhoods in Charlotte’s expanding outer regions, so he saw the Furman house for exactly what it was: an opportunity to maintain the character of an older home while also building his family the house of their dreams. “I’d always seen such potential with that house,” Brian says. “Even before we were ever looking to move, I’d been envious of the size and potential the property had. And the house itself had really good bones.”

The only problem? The house wasn’t for sale. “The original owners, Mr. Furman and his wife, had passed away, and his son, Doug Furman, took ownership of it, and his daughter, Lori, was living in it at the time,” says Brian. “I wrote a nice letter to Doug, asking him if he might ever consider selling it, and it worked,” he laughs.

In December 2005, the Furmans’ 1,900-square-foot house became theirs, and Brian immediately went to work on plans to expand and improve the home’s existing structure. “People told me I was crazy, that it would’ve been so much easier just to knock down the old house and start over,” says Brian. “They were right, of course. That would’ve been much, much easier. But I really wanted the experience of preserving an old house. The history of the area is so important to me. I couldn’t imagine knocking it down.”

Instead, he worked with architects Karen Barton and Kevin Roberts of Meyer Greeson Paullin, who were recommended to him by another of the Furman sons, David Furman, the architect behind many of Charlotte’s “urban chic” uptown residences. In collaboration with Barton and Roberts, Brian designed a staggering 2,524 square feet  expansion to the existing structure in the form of a spacious master suite, a covered front porch, a finished basement with an additional guest suite, a breathtaking patio deck with a stone fireplace, a large garage, and an entirely new second story.

The expansion was to be built on and around the original house, preserving its vintage hardwood floors, art deco fireplace, and retro black-and-white tile floor in the front bathroom. Where the original footprint ended, the family’s new dining room now begins while most of the real “living” is done in the adjoining kitchen.

Brian’s design featured a vast triangular granite countertop; rustic, spacious maple cabinets; a built-in beer-and-wine fridge; and a pantry door with a past. “I found this old door at Cogan’s Antiques in Ridgeway, South Carolina,” says Brian. “It was reclaimed from an old Philadelphia row house. It was in terrible condition, and it’s an odd, tall, narrow shape, but I knew I had to find a way to use it.” He had the door refinished, and added new, custom ironwork to its center before incorporating the door into their pantry.

Upstairs, each of the Pace daughters have their own room, each boasting ten-foot “clipped” ceilings that were designed on an angle so that, from the street, the house wouldn’t appear a full story taller than its original form. “We didn’t want the visual impact of the house to change that much. From the front, it still has that small, cottage appearance, which was important to me as far as maintaining the integrity of the neighborhood,” Brian says.

Downstairs in the finished basement is the “grown-up playroom,” which also contains an additional bedroom and bathroom. Adjacent to the basement is Brian’s one big indulgence, a sizeable attached garage. “I’d planned to do a detached garage, but then I thought if I attached it, I could then put a great roofed terrace patio on top of it,” says Brian of  the outdoor living area where a soaring exposed cedar-beam ceiling covers an expansive patio with a stamped concrete floor and a hand-chinked stone fireplace.

The master suite looks out onto the terrace, making it seem, Stacy says, as if their bedroom is perched in a giant treehouse. It’s here in this master suite that Brian was finally able to get a good night’s sleep; an experience that eluded him during the remodeling process. “If you’re going to take on a project like this, try not to live across the street from it,” Brian says. “I would just sit awake at night, staring out the window at the construction site, wondering if I was making the right decisions in the design.”

Luckily, Brian had the support of his neighbors. And while he was thrilled that his design passed neighborhood muster, there was another vote of approval he needed: one from the Furman family. “When the house was finished and we were finally moved in, we invited the Furman brothers over during the holidays,” Brian says. “They walked through the front of the house, seeing all the things they remembered from their own childhoods, and they were really glad we had kept so much of it intact.”

There was one other part of the house that Brian had left untouched: a portion of the original basement where the patriarch of the Furman family had kept his curious collection of found objects, vintage tools, and projects ripe for the tinkering. “That part of the basement that we left as is, is now my favorite part of the whole house,” says Brian. “I haven’t even begun to sift through it all, and I can only imagine what kind of history is down there.”

It’s exactly that reverence for the past that enabled Brian to create a house that respects the heritage of its surroundings and provides plenty of space for the Paces’ young family to grow for years to come.

This article appears in the Home & Garden December 2007 issue of Home + Garden.
Categories: Home & GardenFeature, Spaces
Contest of the Month