Downtown is filled with condos, but people need space to work, too 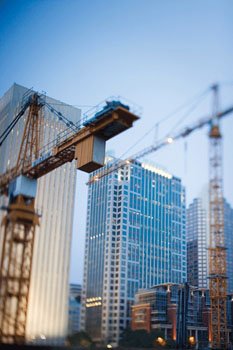 In the past six months, more downtown condo developments have been postponed (three) than have opened (two). But the office space vacancy rate was only 1.7 percent last year.

For the past three years, Charlotteans have been inundated by announcements of condo buildings planned for downtown. A report released in December by Charlotte Center City Partners shows the status of more than fifty projects that were announced in 2006 or 2007. The majority of those are downtown, with about a dozen in South End. Seven condos opened last year—Trademark, Avenue, 701 North Church, to name a few—but most have completion dates listed for 2009 and 2010. Several of those dates are later than originally announced.

Downtown Charlotte finds itself with the abundance of urban living it's been coveting, but practically no office space is available. Downtown represents 34 percent of the office space in Charlotte, but last year it saw class A office space vacancy dip to 1.7 percent, the lowest in the country. Not only does a city's downtown traditionally thrive off the number of big businesses that house offices there, but developers hope the employees will purchase nearby condos.

In a recent interview, developer Afshin Ghazi was asked if there was anything he would do differently with EpiCentre, a 265,000-square-foot entertainment complex that begins opening in phases this spring. "I would've added another tower to it that was an office building," he said.

Last fall, highly publicized condo The Vue announced it would push back its projected opening two years. And in January it was announced that One Charlotte, the luxurious tower that is to feature condos ranging from $1.5 million to $10 million, will be postponed, just eight months after the project was introduced.

Meanwhile, office space at projects such as the Wachovia Corporate Center (part of the First Street Project) and Bank of America's new office building at College and Fifth streets have been filling up rapidly even though those buildings aren't scheduled to be completed until 2009 and 2010, respectively. Wachovia's forty-eight-story office tower is completely leased.

"With the job growth that we've had over the last couple of years, there hasn't really been any new supply of office space in downtown Charlotte," says Steve McClure, vice president of residential services for Spectrum Properties. McClure is overseeing the development of 300 South Tryon, a mixed-used tower that'll include 150 residential units, 40,000 square feet of retail, and 313,500 square feet of office space.

"The fact that [office space vacancy] has reached its lowest levels in recent months—we've been actually doing the project way before then—I'll tell you what, it makes us look like we're really smart," he says.

As further indication of downtown real estate's uncertainty, just days before our press time, Spectrum announced that 300 South Tryon would be postponed.

This article appears in the March 2008 issue of Charlotte magazine.
Categories: Real Estate
Contest of the Month