TWO YEARS AGO, a pipe ruptured underneath a retired Duke Energy power plant in Eden, a small North Carolina town along the Virginia border, spilling as many as 39,000 tons of coal ash into the Dan River and transforming the way the state government oversees an environmental hazard that for years went largely unregulated.

About 38 percent of the electricity produced in the Carolinas by Duke, the nation’s largest utility, comes from coal-fired plants. Coal ash is the residue from coal burned for fuel; Duke plants produce roughly 1.8 million tons of it per year, about a third of which goes to dry landfills or ash basins, where the ash is mixed with water. Coal ash contains such harmful metals as lead, mercury, and arsenic. The Dan River spill—the largest in a long line of leaks into waterways—finally forced the North Carolina General Assembly to act.

In 2014, the legislature passed the Coal Ash Management Act, a law that set a 15-year timeline for Duke to close all 32 of its ash basins at 14 sites throughout North Carolina. The law designated eight of the basins at four sites as high-risk to ground and surface water and mandated their closure by August 2019. The remaining basins must be closed, and their ash moved and safely stored, by 2024 or 2029, depending on their risk classification. Duke has also paid $102 million to resolve a federal grand jury investigation and a $7 million fine to state environmental regulators.

On December 31, the state Department of Environmental Quality released its proposed risk classifications for all coal ash sites in the state, with final classifications to come later this year. (A few sites were tentatively designated low-to-intermediate risk; DEQ will determine their exact closure dates later.) Duke is already moving the ash from some sites. Here’s a progress report, beginning with the plants that are closest to Charlotte. 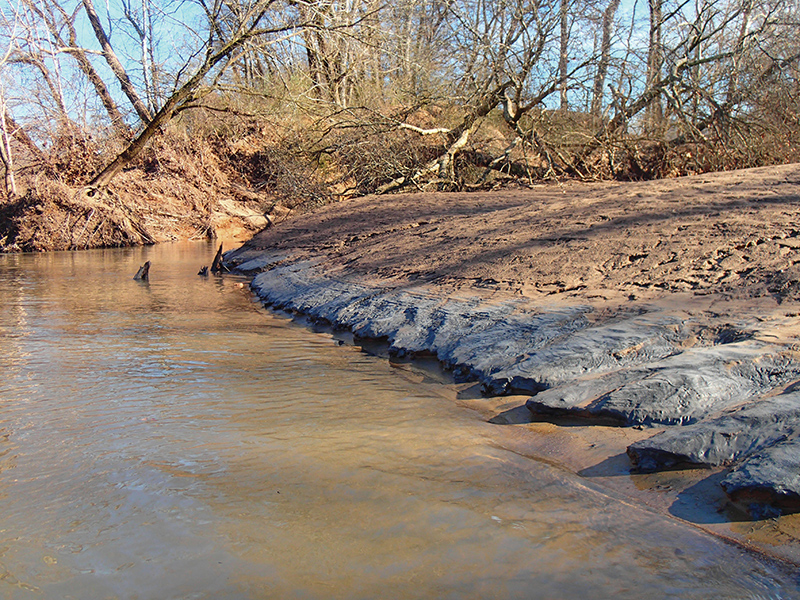 After the February 2014 spill, coal ash from the Dan River power plant could be seen along the banks of the river.

Riverbend Steam Station
Retired power plant. Two ash basins, high risk
This power plant is located beside Mountain Island Lake, which provides 80 percent of the water for Charlotte-Mecklenburg Utilities. The water is treated before it enters the drinking supply. Still, some nearby residents and environmentalists have raised concerns about liquid from Riverbend’s coal ash basins leaking into the lake.

In January, Duke began moving most of the ash by train to a landfill, whose base is lined with a clay-and-plastic barrier to prevent leaks, at the Brickhaven mine in Chatham County. The company is waiting for approval from the Environmental Protection Agency and the state to drain the water from the basins to allow the remaining ash to dry so it can be moved. The deadline for closure of the ash basins is August 2019.

Allen Steam Station
Two basins, low-to-intermediate risk
Closing date to be determined, but must be before the end of 2029.

Marshall Steam Station
One basin, low-to-intermediate risk
Closing date to be determined, but must be before the end of 2029.

Buck Steam Station
Retired power plant. Three basins, low-to-intermediate risk
Last year, state health officials issued don’t-drink warnings for 39 contaminated wells near the plant’s three ash basins. State regulators have tested the wells and say similar levels of the two contaminants, vanadium and hexavalent chromium, occur naturally in wells and municipal water systems throughout North Carolina. State environmental officials continue to test the water. The closing date for the basins has not yet been determined, but must be before the end of 2029.

Dan River Steam Station
Retired power plant. Two basins, high risk
At the site where the ruptured pipe caused the massive spill, Duke began transporting ash by rail to a lined landfill in Virginia in October. The company must close the basins here by 2019.

Sutton Plant
Retired power plant. Two basins, high risk
Similar to what it’s doing at Riverbend, Duke is transporting the ash to the Brickhaven mine on a newly built rail line. As with Riverbend, the deadline for closure of the basins here is 2019.

Belews Creek Steam Station
One basin, low-to-intermediate risk
Closing date to be determined, but must be before the end of 2029.

Mayo Plant
One basin, low risk
Duke must close the basin and dispose of the ash by 2029.

Roxboro Plant
Two basins, one intermediate risk, one low risk
Deadline for closure and safe disposal of ash is 2024 for the intermediate-risk basin, 2029 for the low-risk basin.

H.F. Lee Plant
Retired power plant, five basins
Intermediate risk
Duke has recommended a plan to state regulators for excavating the ash and closing basins at all three above sites. Deadline for closure: 2024.

This article appears in the February 2016 issue of Charlotte magazine.
Categories: In Print, The Buzz