THE WORKS of 17 local artists will be part of the upcoming Charlotte City Center Tower, intended for walls and exteriors of the AC Hotel and Residence Inn, Nuvole Rooftop TwentyTwo, and a rentable penthouse suite. The unprecedented art program from McKibbon Hospitality comes from a partnership with Paul Picarazzi of Vision Ventures and North Carolina-based art consultant Liz L. Barr of Art Resources.

We recently visited the studios of three of the chosen artists to see what they were working on for the project. Here’s what they had to say about the work chosen: 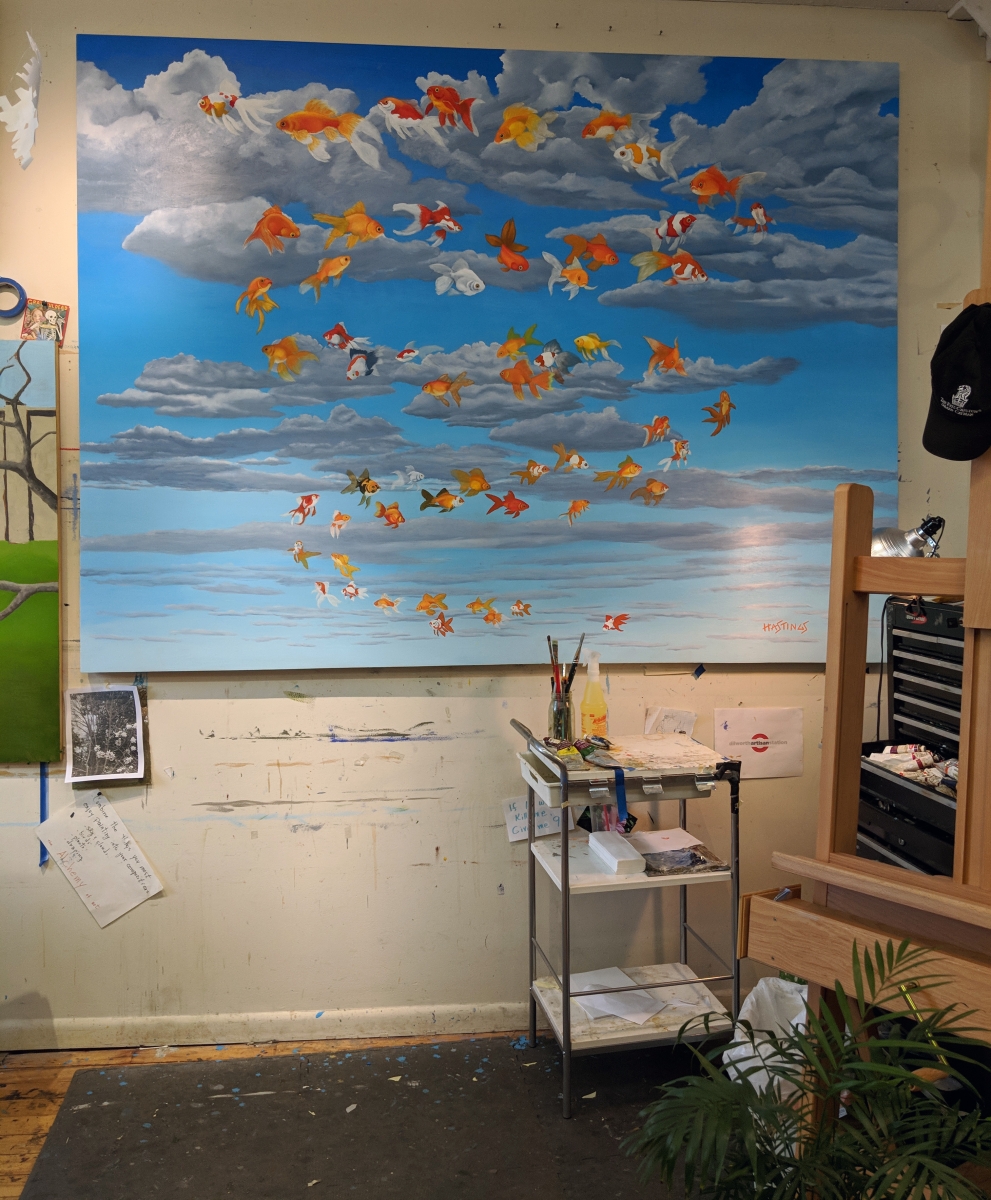 Paul Hastings, painter, on the idea behind the work:
“I did piece for CaroMont Health in Gastonia for their children’s pediatric emergency waiting room for the kids, with the goldfish in the sky for the kids to take their mind off their ailment. It started with a small painting, with the idea of the goldfish being confined to a bowl and asking, ‘What if they could fly out?’ … Then, Liz Barr contacted me after seeing the piece made for CaroMont and said, ‘You know, we’re doing a seafood restaurant.’ And the name of the restaurant (Nuvole) literally means ‘clouds’ in French.”

Lori Love, mixed-media artist, on her process:
“I map out the piece with the blacks of the vinyl, which serve as the negative space. Then, from there, I do everything else recycled, too. My friend Jimmy at Repo Records, rather than dumping his old vinyl, he gives it to me. And then for the collaged portions, I used the inner vinyl sleeves. … Then, with other parts of the work, I use VHS tapes. I vacillate between the abstract and the figurative. I think it’s interesting to ask, ‘What do you do with an artform, once it’s obsolete?’” 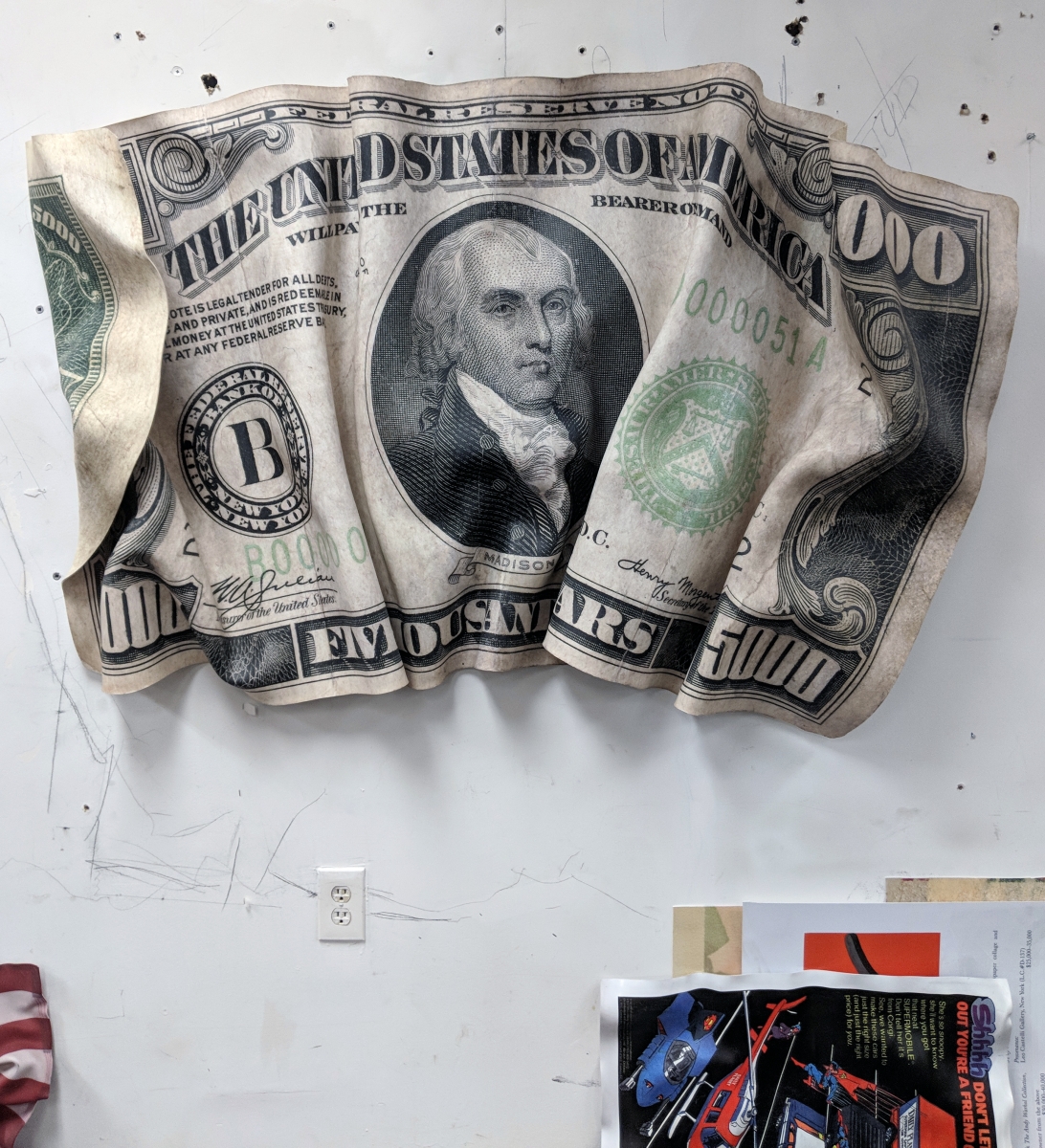 Paul Rousso, sculptor, on his enormous, plexiglass recreations of paper products like comic books, newspapers, cereal boxes, and currency:
“Print still seems to be on its way out. Some day, a kid is going to be standing in a museum and he'll point at that and say, 'Mommy, what's that?' Print brought us out of the Dark Ages, and then it's over. It may be the comics or the money or the book pages I'm connected to (in a nostalgic way), but it's really about all of this stuff, which is all just ink on paper."

This article appears in the April 2018 issue of Charlotte magazine.
Categories: Arts + Culture

Jan 10 @ 8:00 pm – Feb 1 @ 8:00 pm Warehouse Performing Arts Center
Running January 10th to February 1st 2020, the Warehouse will present what critics are hailing as a” guilty pleasure “ ( New York Times ). A spite-filled comedy about women scorned in Minnesota and the really, really nice gangsters— Norwegian hit men—they hire to whack their ex-boyfriends. Olive is a transplant from Texas and Betty is a transplant from Kentucky,...
Tickets
Blowing Rock WinterFest

Jan 23 @ 8:00 pm – Feb 2 @ 8:00 pm Duke Energy Theatre at Spirit Square
Winner of the 2016 Kesserling Prize for Playwriting Newly discharged soldier Jess has finally returned to her Florida hometown. She brings with her not only vivid memories of Afghanistan, but painful burns that have left her physically and emotionally scarred. Jess soon realizes that things at home have changed even more than she has. Through the use of virtual reality...
Tickets
Vulture Venture

Jan 26 @ 12:30 pm – 1:00 pm Carolina Raptor Center
Vultures and humans will engage in some kind of fun activity, trainers choice! It could be painting, playground fun, or taking a walk…yes, with a vulture. Sponsor: Carolina Raptor CenterFacebookPinterestTwitterLinkedin
January 2020 Jan 2020
Subscribe