The LYNX Blue Line has kicked Charlotte's urban edge up a notch. Just imagine what the northern expansion will do (are you listening, UNCC?)

A few Sundays ago, my wife and I rode the LYNX from our South End studio apartment to Sunday brunch at the Westin, chilled for a while, then caught the train back one stop to work off the calories at the Dowd YMCA. It was a really urban experience—and one with a low carbon footprint. For us, driving and paying for parking is a thing of the past. We can hop on the train at Bland Street and in a few moments be at a meeting in the center city, go to a concert or the Charlotte Symphony, or simply meet friends in a bar. 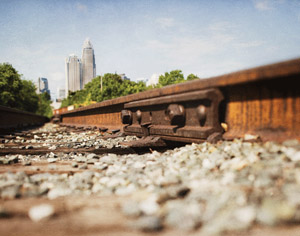 Charlotte is learning to love trains. The success of the light rail line running along South Boulevard to uptown is well known and celebrated. Train service has been largely trouble free; the only real problem facing the Charlotte Area Transit System is coping with success. The naysayers have gone silent.

But this is just the beginning. When the LYNX Blue Line extends to the campus of UNC-Charlotte and beyond in 2013, this city will enter a whole new stage of development. Ridership will increase even further, and the rail line will comprise a true system, linking destinations rather than simply feeding uptown.

Now imagine this convenience and urbanism magnified many times when uptown is linked with University City and the campus of UNCC, and I don't just mean that I can catch the train to my office (I'm a professor of urban planning and design). From a station right on campus, nearly thirty thousand students, faculty members, and staffers will have direct access to a lively and attractive downtown that puts Atlanta's to shame. And, just as importantly, it will be easier for Charlotteans to remember they have a fine university right here in their city — one that will be easily accessible and not at the far end of a miserable drive on congested freeways.

That's the good news. But there are many obstacles to overcome before the trains roll sweetly onto campus; several more planning and engineering challenges exist on the northeast line compared to the south line. The cost will be greater, too, and the feds will need to help out substantially. From uptown to Thirty-sixth Street, things will be fairly straightforward. The northern extension of the rail will replicate the South End experience, following the old train tracks and boosting new development along the line. Charlotte will have an exciting urban corridor all the way from Scaleybark in the south to NoDa in the north, with thousands of people living, working, and playing within the sound of the train's little bell.

But north of Sugar Creek, things get tricky. At some point, the line leaves the railroad behind, and swings over to North Tryon Street, either at Sugar Creek or Old Concord Road. From there the trains will run in the North Tryon Street right-of-way (the land owned by the city in the median and next to the road), all the way to University City. Apart from a short stretch at Scaleybark in the south, this will be the first time that Charlotte has experienced trains truly mixing with cars. Be prepared for a whole new group of naysayers who will predict disaster and accidents galore. 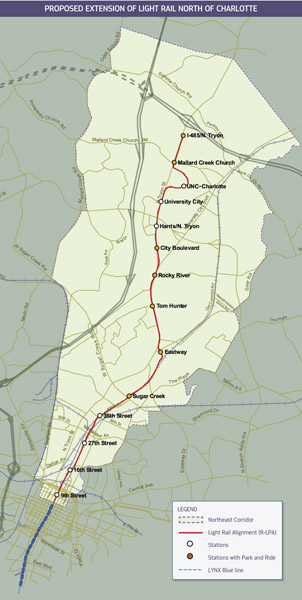 This stretch of line along North Tryon Street is a challenge for more than technical reasons: the road is a visual disaster area for most of its length between uptown and University City. It's American commercial suburbia at its worst, with scruffy streets and dying strip malls, used-car lots, and the commercial detritus of a once-prosperous highway. Now, it's almost too ugly for words, and the hardworking businesses that remain have an uphill struggle as prosperity deserts them, flitting around the city like a fickle lover looking for the next and newest sugar daddy. It will be several years before this zone redevelops. Bland but useful park-and-rides will rule for a while between NoDa and University City, but eventually, just as along South Boulevard, enterprising developers will find opportunities in the most unlikely places. My guess is that by 2020 new commercial and mixed-use development will emerge like an urban butterfly from an ugly chrysalis along this stretch of the corridor. The badlands caused by so many years of failed planning and lowbrow development will find new life: housing and other uses lining the tracks will provide an attractive alternative to suburban living that's made ever more expensive by volatile energy prices.

University City presents a different kind of test of planners' ingenuity, including crossing Harris Boulevard at its busy intersection with North Tryon. That engineering solution will probably soak up several million dollars. But the main challenge is urbanizing University City. If we learn the right lessons from other cities, the stretch of road from the “weave” of highways 49 and 29 up past the new buildings of the university research campus can become a totally new “urban boulevard,” with six- to eight-story buildings lining a street the likes of which Charlotte's never seen. Wide sidewalks and parking on slow-speed “frontage lanes,” can create a safe pedestrian place to stroll, chat, sit, eat, and drink while cars and trains zip by.

This concept has worked well in cities like Paris and Barcelona, where smaller one-way access lanes separated by tree-filled medians line the larger traffic-heavy roadways (think the Champs-Élysées and Barcelona's Paseo de Gracia).

These new buildings will rise on the redeveloped sites of aging buildings at University Place and their adjacent strip malls, all of which are coming to the end of their first round of useful lives. Instead of generic retail boxes, these sites can redevelop at much higher intensity, with exciting new buildings wrapping around parking decks. This is happening in South End, and University City properties are ripe and ready for something even better. Housing and offices, mixed with classrooms and laboratory spaces, can sit atop bars, stores, and restaurants on both sides of the street in a truly urban mix. This can only happen if university and city partnerships flourish. But the omens are good; after turning its back on its neighbors for decades, the university is now reaching out to be a partner in this transformation.

The radical urbanization of University City is an idea whose time has come. Transit will help turn the district from a fading suburban mishmash to the kind of urban center that its name has always promised but never delivered.

Generations of UNCC students have yearned in vain for an urban experience as part of their education, something akin to Franklin Street in Chapel Hill, or even Hills-borough Street at NC State. And in a few years UNC-Charlotte could have an urban boulevard that will knock the socks off its rivals. For years the university has strained to establish itself with an image that befits a fine, hardworking institution of higher learning. New buildings dressed in drag, wearing old architectural styles and pretending to be historic buildings imported from Harvard or MIT haven't worked. And football's way too expensive.

But the train brings the chance to create a real urban edge to the campus where students come and go to class amid the bustling pedestrian life of a thriving city district—real urbanism rising from the ashes of an outdated suburb.

Of course, there is the very real question of race-week traffic, which clogs Highway 29 twice a year for days at a time. How on earth will this fancy urbanism work with thousands of race fans streaming through? There's an easy answer to that: redirect them away from that stretch of Highway 29! That's right. Send speedway traffic through I-85, Highway 49, and I-485 for those few days every year. Sure, people will complain, and city officials may have to enact a hunger strike on the steps of the North Carolina Department of Transportation offices to get the bureaucrats to agree, but think of the benefits. Charlotte gets a huge new chunk of a real city with all the economic benefits that accrue from the intensive redevelopment. And out-of-town race fans get to drive on freeways, where they belong.

But it's not all about the university, or University City, even though these two heavyweights stand to benefit the most and to help validate the new rail line in terms of ridership. As importantly, the extended LYNX Blue Line will capture commuters from Concord and Cabarrus County at the northern I-485 park-and-ride deck; this will save lots of people a lot of gas and improve air quality for the rest of us. The line might even reach Concord in ten to fifteen years if Cabarrus politicians can think regionally and collaborate with Mecklenburg.

Despite the increased engineering complexity and higher costs of the University City extension compared with the original south rail line, the payback to the city will be even greater than the development bonanza in the south corridor: this extension of the Blue Line will create the backbone of a whole new Charlotte, a twenty-mile linear "city within a city."

As the city evolves to meet the challenges of the post-petroleum economy, major changes in urban patterns and human behavior will occur over the next generation as suburban — and especially "ex-urban" — lifestyles become increasingly difficult to afford. If Charlotte is to remain globally competitive (and the prosperity of all of us depends on that), and if it is to remain affordable for its citizens, the city must continue to invest in transit systems and their associated compact patterns of land use. Many professionals fought for this future in the face of sometimes harsh public opposition, but architects, planners, and engineers who were once lampooned for their crazy ideas are now beginning to be hailed as visionaries.

They dreamt of Charlotte as a great city. Thanks to them, in a few years we will live that dream.

David Walters is a professor of urban planning and design at UNC-Charlotte. He is the author of Designing Community: Urban Design, Planning and Form-based Codes.

This article appears in the September 2008 issue of Charlotte magazine.
Categories: Opinion, Perspective, The Buzz