Waiting for the Miracle on the Hudson

A story five years in the making 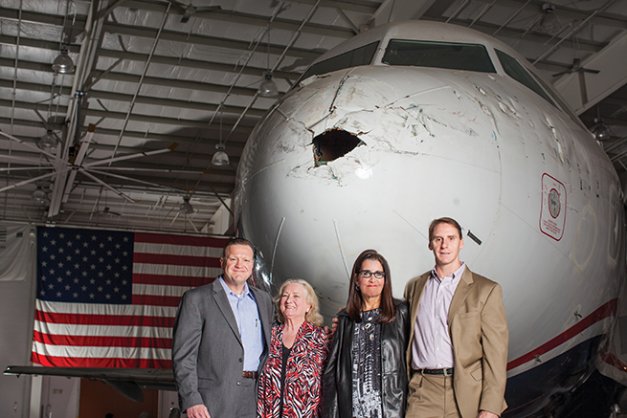 From left: Mark Hood, Beth McHugh, Denise Lockie, and Steve O’Brien were among the 74 Charlotte area residents who survived the crash landing of US Airways Flight 1549, which later became known as the Miracle on the Hudson.

Five years ago today, my phone rang. Twitter was only starting to become popular then, which meant, like most popular things, I was still about four years away from using it. So this is how bad news was delivered to me: Ring-ring.

On the other end was an editor from a daily newspaper in New York. A friend of mine had given him my number, he said. The editor sounded rushed. He wanted to know if I could hustle to the Charlotte airport that afternoon and gather some scenes. I asked why. He told me that a plane had crashed in New York. It should have landed here. Before I could even process that, he told me that he wanted me to find some reaction from people at the airport.

He said he’d pay me $250 for the evening's freelance work, and I thought that was pretty good money, so I did it. I was living in Winston-Salem then, so I didn't get to the airport until about 5 p.m. I stayed until about 9:30 p.m. I took notes, but I didn't really find anything good. I found people hugging and crying at baggage claim, but these weren’t people who were on Flight 1549. Those folks would come home later. The people I was interviewing weren't really characters in the story of the flight, but people who all felt connected to the crash because they, too, were on a plane that day.

The same editor asked me to drive back down to Charlotte. I asked him what he wanted me to find. “I want you to go sit outside these f**kin’ people’s f**kin’ houses and wait for them to come outside and talk to them,” he said.

Five years later, I’m the executive editor of this magazine, and in the January issue, we have a story about the Miracle on the Hudson. Chuck McShane tells a stellar narrative that starts on the runway at 2:45 p.m. that day, with two passengers arguing over politics, and it ends with them in their current lives after the crash. Chuck’s piece is not just a narrative of the day. It also includes great pictures from staff photographer Logan Cyrus, who shot the survivors at the Carolinas Aviation Museum with the plane that changed their lives. More than that, though, it ends with real perspective from the people involved, perspective that they no doubt wouldn’t have had the next morning, perspective that only comes from time. Turns out, even in a big news story, it's absolutely worth it to give people the chance to be people first.