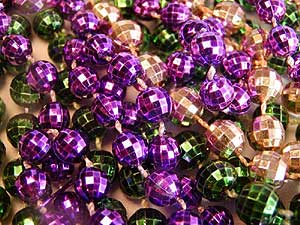 What we think you should be doing this weekend.

(Sorry, our picks may seem a little sketchy this weekend. We blame it on Valentines. And Mardi Gras.)

KEEP YOUR SHIRT ON – Beads for Needs
Yes, this party in the Wachovia Atrium is a Bourbon Street-themed Mardi Gras type affair, and yes, there will be plenty of beads to go around, but there will be no need to bare it all. This Mardi Gras is for charity—specifically to support Pat’s Place Child Advocacy Center, so the traditional method of getting beads would be decidedly uncouth. Tickets are $25 in advance, $30 at the door.
Thursday Feb 12 6-11 p.m. 301 S. www.beadsforneeds.org

MAKE OUT WITH JUSTIN BOBBY – The Great American Makeout
If you don’t know who Justin Bobby is, then just consider yourself lucky and jump on down to the next event on this list. Trust me. If you do know who Justin Bobby is, then you watch The Hills, and while your taste in television programming is questionable, it’s likely that you might be up for a debaucherous night at Whisky River, where J. Bob himself will be hosting this event where puckered up Charlotteans will attempt to set the record for world’s longest makeout (from what we gather, it’s not a group kiss, but more like kissing your loved one at midnight on New Years, but then you just keep going as long as possible). Sarah and I attended Wake Forest, where the greek system hosted a very similar event every January entitled “Pledge Night”. As we are still trying to forget some of the saliva-covered details of those college days, we will not be attending Justin Bobby’s event, as it would likely only bring back bad memories. We should mention, however that proceeds from the night will benefit the Children’s Heart Foundation, which does make us feel a little less dirty. A little.
7 p.m. 210 E. Trade St. Tickets $10, $40 and $80. For details, go to www.rockhouseevents.com
Friday Feb 13

LISTEN FOR THAT ONE ABOUT A G-STRING – Love Notes classical music concert at Queens University
For a more civilized celebration of Valentine’s Day, head to Queens where a full symphony orchestra will perform beautiful, classical pieces that express love in many languages. We were just kidding about “Air on a G-string”. These people are professionals. We, however, just wrote a whole paragraph about Justin Bobby and making out, so it’s arguable whether or not “professional” can apply to us anymore, so we felt justified in making the g-string comment. Moving on.
Saturday Feb 14 8pm, 1900 Selwyn Ave. Tickets $20-$60 (704-337-2213)

RENEW YOUR FAITH IN LOVE (Or Not) – Movies on TV
Television programmers obviously know exactly how to eek out maximum viewership from all the single ladies (and guys) who are spending V-day on the couch. They’ve lined up a night full of flicks that will make you feel warm and fuzzy, even as you drink yourself to sleep and curse the opposite sex: Sleepless in Seattle (8pm on Oxygen), Sweet Home Alabama (6pm on USA). Say Anything (8pm on FMC), and new Hallmark movie Before you Say “I Do” (9pm on Hallmark Channel), which normally we wouldn’t suggest except that it stars sexy David Sutcliffe, who played Christopher Hayden on Gilmore Girls, so we are totally on board. If you aren’t in the mood for a happy ending, then tune into The Break Up (8:30 on USA) and think about how incredibly sad it is that Jennifer Aniston dated the ONE GUY who was ACTUALLY there to watch her husband fall in love with another woman on the set of Mr. and Mrs. Smith, make a movie with him, and then actually break up with him after filming The Break Up! The sadness is triple fold. Perfect for Valentine’s Day.