When the DNC Comes to Town, Who Wins?

When Charlotte hosts the Democratic National Convention in September 2012, plenty of locals will profit—in political, economic, or social capital. But for almost every winner there’s a loser. Our take on who the DNC will help and who it will hurt:

Click to image to enlarge Pin the Tail on the Democrat. 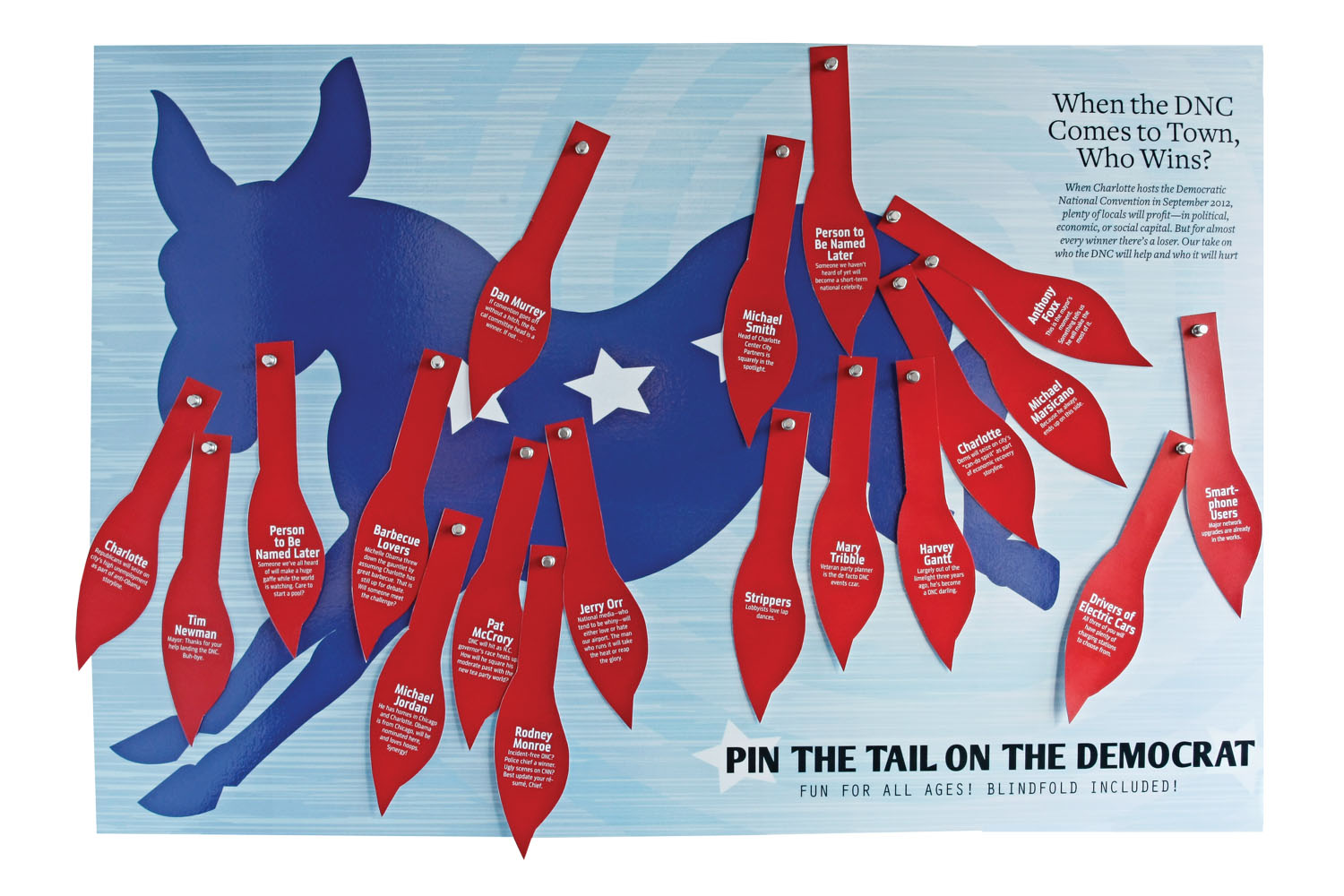 Anthony Foxx: This is the mayor’s moment. Something tells us he will make the most of it.

Jim Rogers: The head of an energy company becomes a star at the Democratic National Convention? Sometimes truth is stranger than fiction.

Michael Smith: Head of Charlotte Center City Partners is squarely in the spotlight.

Smartphone Users: Major network upgrades are already in the works.

Venues & Caterers: Parties are the real economic engine of the DNC, and local venues will reap the rewards.

Bobcats Arena: Newish arena will benefit from all sorts of upgrades.

Michael Marsicano: Because he always ends up on this side.

Person to Be Named Later: Someone we haven’t heard of yet will become a short-term national celebrity.

Harvey Gantt: Largely out of the limelight three years ago, he’s become a DNC darling.

Dan Murrey: If convention goes off without a hitch, the local committee head is a winner. If not …

Barbecue Lovers: Michelle Obama threw down the gauntlet by assuming Charlotte has great barbecue. That is still up for debate. Will someone meet the challenge?

Jerry Orr: National media—who tend to be whiny—will either love or hate our airport. The man who runs it will take the heat or reap the glory.

Michael Jordan: He has homes in Chicago and Charlotte. Obama is from Chicago, will be nominated here, and loves hoops. Synergy!

Pat McCrory: DNC will hit as N.C. governor’s race heats up. How will he square his moderate past with the new tea party world?

Tim Newman: Mayor: "Thanks for your help landing the DNC. Buh-bye."

Charlotte: Republicans will seize on city’s high unemployment as part of anti-Obama storyline.

Person to Be Named Later: Someone we’ve all heard of will make a huge gaffe while the world is watching. Care to start a pool?

People Hoping to Get Rich Quick: Because, in the end, those people always lose.