Reggie Blount is on the front lines of the green movement—he drives a county recycling truck. Here’s what it’s like to be him. (Would it kill you to sort the paper from the plastic?) 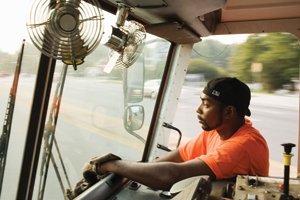 Blount begins his route at 6:30 a.m. and it’s a full day’s work. The county estimates that only 43 percent of local residents recycle at home. – Chris Edwards

Reggie Blount has seen some strange things inside the red recycling bins he empties daily—DVD players, flowerpots, bones. Sometimes, people just use them as extra garbage pails. They’ll leave food and juice inside the cans and bottles, or try to include greasy pizza boxes. Cockroaches and crickets are often hiding inside.

But it’s not every day you get a dirty diaper. More like every couple weeks. So Blount, an employee of City of Charlotte Solid Waste Services, isn’t as surprised as I am, though you never really get used to a tightly wrapped package of human waste waiting conspicuously with the soda cans and milk cartons for reuse.

“She’s got a Pamper in here!” Blount says, holding it over my shoulder, while I check my watch. “I don’t understand it, man. What’s recyclable about that?”

After a few hours of sticking my head in the stinky bucket on the side of Blount’s recycling truck, picking slimy bottles out of the paper section and sludgy paper out of the bottles-and-cans section, I’m about ready for lunch. Actually, I’d settle for a break and my air-conditioned ride back to the yard where my car is.

It was fun at first, riding on the side, dumping out the nicely sorted bins in the first neighborhood, where Charlotte’s finest citizens evidently reside. But then we turned the corner, dumped a bucket of newspapers, and heard our first clank of the day. The next house had two stacked buckets with an unholy mixture of pizza and cereal boxes, bottles, paper shreds, and Styrofoam.

“Can you imagine when it’s hot, and it’s every house in the community?” Blount says. It got hot pretty fast.

Then came the garbage-juice splashes, spills, and drips from digging around and pulling assorted items up from where they didn’t belong, and the cockroach that ran over my hand. The bin under the sprinkler. The giant pieces of cardboard that didn’t fit anywhere. And then there’s Blount’s story that diapers aren’t the worst he’s encountered.

“It’s already a hard job,” he’d told me earlier that morning. “Sometimes, people just make it harder. You’ll see what I’m talking about when we get there.”

You wouldn’t expect much style in a garbage man on the job, but Blount’s got it, starting with the fitted black Yankees cap turned backward on his head and box-rimmed sunglasses sitting on top. His Mecklenburg Waste Management-issue orange T-shirt and blue pants are worn just a little bit loose, and the pants tumble down into a nice pair of Timberland boots. When we meet, and he finds out what I’m up to, a few gold teeth stand out in his smile.
We start at 6:45 on a Tuesday morning by heading to the Metrolina Recycling Center. Monday and Tuesday are the busiest days in Charlotte’s East quadrant, and we need to get underway with an empty truck.
There are two driver’s seats—the regular one, and the one I’m in on the right, which Blount uses most of the day when emptying bins. It’s really a cushioned metal frame pulled down from the back wall of the cab, and I’m bouncing and sliding all over the place, trying not to touch the wheel or pedals or fall out the side.
Blount is team leader in the East, and he’s shouting over the radio to a guy named Benny, trying to find someone to cover an unmanned route. I can barely hear him over the engine. Benny normally does yard waste but will have to work recycling today, it seems. A lot of people are on vacation—including, apparently, Blount’s assistant—and one driver didn’t show up for work. Turnover is a problem, and they end up using a lot of temps, who aren’t always reliable.
“This job’s not for everybody,” Blount says. “Some guys, they just can’t take the heat.” He means that very literally. “One person, last week, he was from New York as well. It was so hot, he jumped out of the truck and quit right on the route. He couldn’t take the heat.”
Blount is from Brooklyn, but he can take the heat. He moved here two years ago with his wife and two kids. At first he didn’t like it here—not enough to do, he thought. But it’s grown on him. “It’s quiet, man,” he says of his neighborhood in south Charlotte. “Nice and quiet.” And there are other things. “The first thing I noticed is how smooth the roads are,” he says, smiling. “I like that.”
Blount started out in yard waste before switching to recycling. He says it’s not a bad gig. He’s home every night—but pretty late sometimes—and gets the weekends off. The city is also paying for the business classes he’s starting this month. “That’s another thing I like,” he says. “They give you the opportunity to better yourself, right here in Charlotte. One day, I could be supervisor of the city.”
For now, though, it’s time to empty the truck. We pull up to the buzzing compound that is the Metrolina Recycling Center, a giant warehouse with five large entrances and grimy bulldozers milling back and forth between the mountains of bottles, cans, cardboard, and paper. Our truck joins the procession to weigh in and dump. Blount backs into the paper entrance and pulls a few levers, which make the cab shake and jolt as the tail end tilts back.

“Hold on now. Because I gotta move up and hit the brakes so the paper will come out.”

I come close to falling out. After several tries, we back into a different door to dump the bottles, which are crushed back by one of the bulldozers. The plant in the East processes about 210 tons of recyclables a day, and they all leave in compressed cubes on their way to being converted into everything from park benches to fiber for clothing.

The bottles and cans eventually travel up a conveyor belt to a windowless yellow tent, where “pickers” do exactly what you’d imagine. Yes, there are actual people inside, a sign near the tent answers before there’s time to ask.

Most of the sorting takes place at the curb in front of the houses—after the bins are emptied into the mechanical arm on the side of the truck, not before, because it’s easier on the back. Solid Waste Services estimates that 43 percent of Charlotte residents recycle at home. Like recycling, sorting is not required.

The more people have to think about it, the more likely they are to throw items away instead of recycle them, says public information officer Brandi Williams. “The biggest thing is convenience.”

The goal is to get the stuff into the bins, plain and simple. That’s why you—the consumer, but also the producer—are allowed to leave paper labels on cans and safety rings on bottles. You can even leave the bottle caps on, though they’d rather you didn’t, since caps can clog the machines and cause safety issues, and they aren’t reusable.

But because the industry is market driven, there are certain things that won’t fly. Only numbers 1 and 2 plastics (milk jugs, liquid detergent containers, plastic soft-drink bottles) make the grade. So the Frisbee and other toys Blount and I found along the route are fished out and thrown back into the bins. So is all the Styrofoam. The right things to recycle are marked with those familiar arrows—check the bottom of your items.

Some people do make the extra effort to sort. A house might have two buckets, one for plastic and glass, and the other for paper. Extra buckets are available for free at locations throughout the city. A few bottles and cans might sit on top of a stack of paper. Or the week’s newspapers and scraps packed nicely into a paper bag—the cream of the crop.

Stops like that take ten to fifteen seconds. The messy ones can take up to two minutes. It makes a difference, both to Blount and his team and the efficiency of the entire process. Trucks service an average of 125 homes an hour and can make more than 1,000 stops in a day.

“Some people sort, some people don’t,” Blount says. “The ones who do, man, I’ll be happy.”

And if you live in that house on Randolph Road, you’re known for having the nastiest bucket in the city. It stinks. You know who you are.

This article appears in the October 2007 issue of Charlotte magazine.
Categories: Feature, Green City, The Buzz
Contest of the Month