Over the past year, businesses have emerged with their takes on classics

UPDATE: Cheat’s Cheesesteaks has signed a lease for a brick-and-mortar in a space between Elizabeth and Plaza Midwood on Pecan Avenue. It’s the space occupied by the former Belle Cheveux Salon and is near Villani’s Bakery. They are targeting an opening in late summer. Unpretentious Palate has a full story on the Cheat’s plans.

These founders launched at an interesting time to open a small business. But the same environment that’s proven difficult for brick-and-mortar spots during the pandemic has given them the flexibility to pop up around town, test the waters, hone their crafts, and build a following. I reached out to owners behind four concepts to find out what they’re serving around town, where, and what’s next: 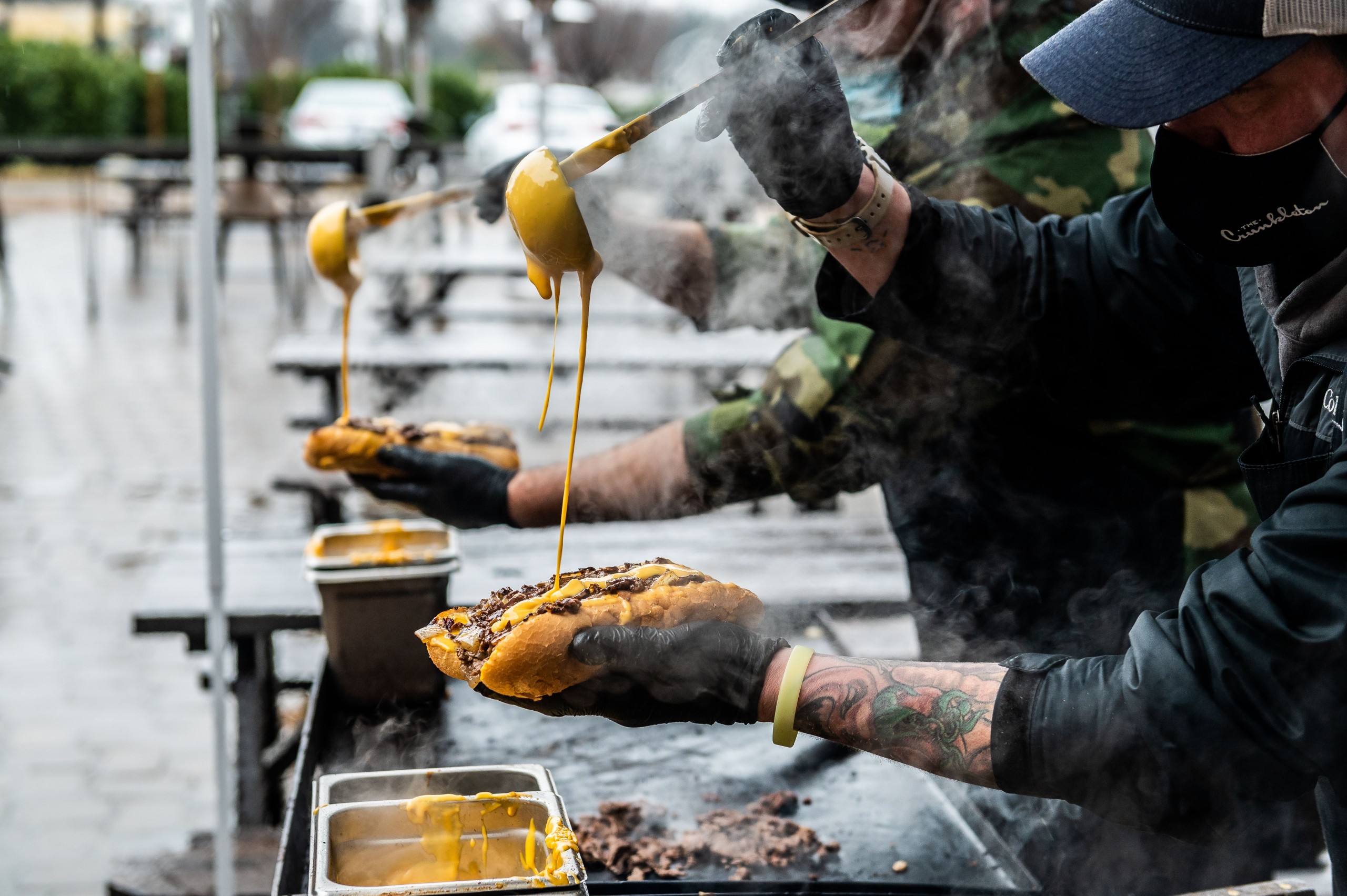 General manager Hannah Smith, chef Greg Balch, and Ryan Hart form the team that started Cheat’s Cheesesteaks. While the pop-up business is not connected to The Crunkleton, inspiration came while the three were working together at the restaurant during the uncertain times of the pandemic.

When Hart and I spoke this spring, the team was preparing for a trip to “the Mecca of the steak sandwich,” to see just how they do it in Philly. In July 2019, while working in his role as bar manager at The Crunkleton, Gary Crunkleton took Hart on a similar trip to New Orleans to research classic cocktails. “That kind of investment in education and perspective is really invaluable, and something me, Hannah, and Greg learned from Gary,” Hart says.

Similar to one of Crunkleton’s famous Old Fashioneds, Hart knew any changes to the original would raise red flags: “It’s like balancing a cocktail. It takes that mentality for something as simple as a four-ingredient sandwich.”

Not without argument, many people from Philadelphia swear by the Whiz. And the three wanted to take the same “top line” approach Ryan Hart says Gary Crunkleton instilled in them. Cheat’s Cheesesteaks doesn’t deviate much from the simple versions found 500 miles away on South Street. Nevertheless, they pored over the details, experimenting with various cuts and thickness levels—from a fatty ribeye, cut razor-thin at one and half millimeters to A5 wagyu—before landing for now on the USDA Prime top round they source from Buckhead Beef. The meat comes sliced to three millimeters before hitting a hot griddle, seasoned, tossed with onions, and slapped on a roll. But the key to gaining more than 4,000 Instagram followers in five months, and 10 sold-out pop-ups, lies in the power of the Whiz. Available with beef, buttermilk-marinated chicken, or plant-based Beyond Meat, and grilled onions, the real winner, says Hart, is a Kraft Cheez Whiz-topped cheesesteak. And we’re talking a lot of it. Cheat’s presence on Instagram is dripping with photos of griddled, caramelized meat, stuffed into an Amoroso roll, and absolutely covered by a ladle-full of hot Whiz.

A storefront is in the works, “a stone’s throw” from their kitchen at Elizabeth’s The Crunkleton, in neighboring Plaza Midwood. Other cheese options will be offered, according to Hart. But, advice proffered in an Instagram post from November of last year makes a simple suggestion to customers: “Become one with the Whiz.”

Mary Jayne Wilson opened her new business in the heart of the pandemic: A pop-up made more sense rather than her signing a lease for a brick-and-mortar spot.

Wilson gained her training in the first Charlotte class of Johnson & Wales University in 2007 before getting her foot in the door at Amelie’s French Bakery, where she would eventually move into the role of director of operations and help open all five additional locations. “I learned so much about the business side. I kind of grew up there,” Wilson says. “But I still dreamed of having my own thing.”

Wilson left Amelie’s in November and her mind fell to a comforting classic as the basis of her new business: “When someone has a baby, or gets sick, buys a house—chicken pot pies have always been my go-to as a gift for people. It’s the ultimate comfort food.” 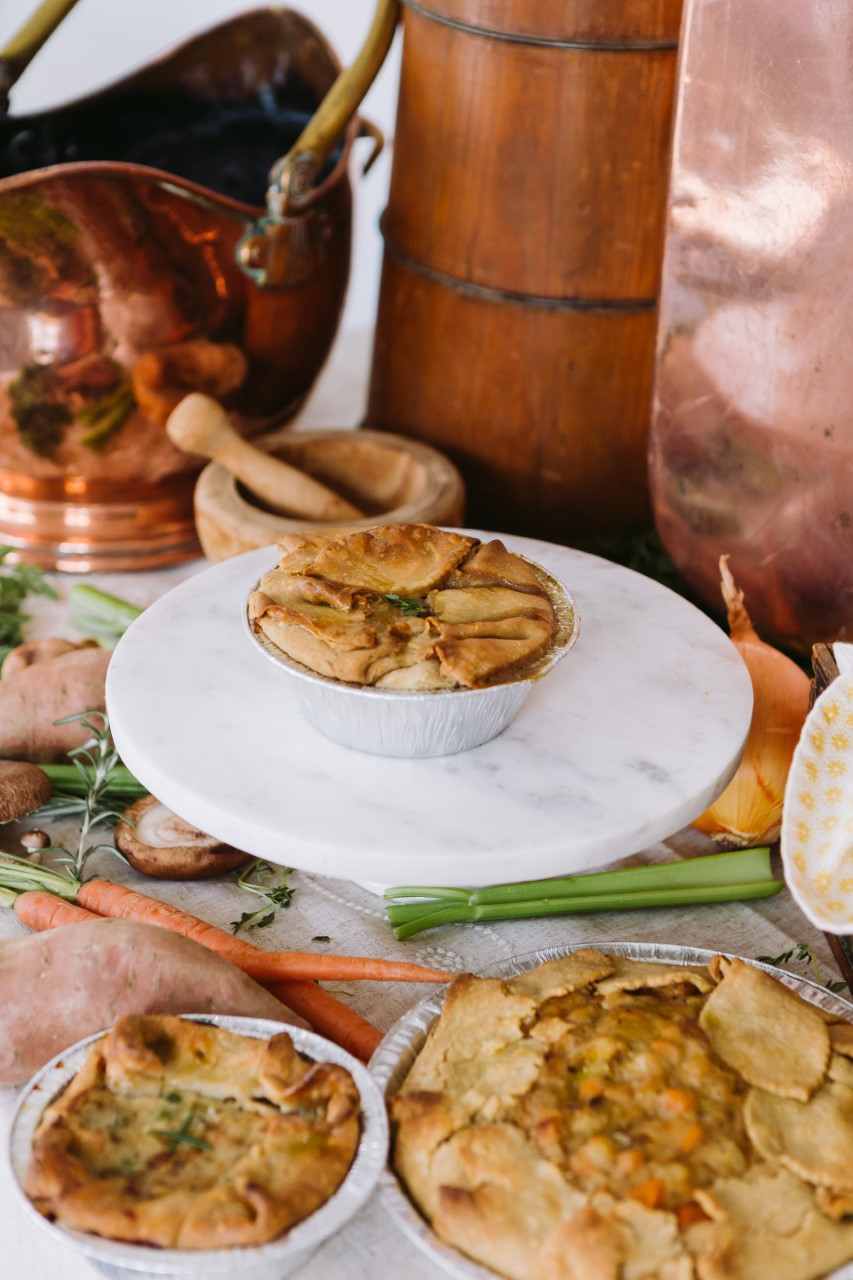 Chicken and vegetable pot pies were the first baked goods coming out of her oven but Wilson says her name, Thoughtful Baking Company, was left broad, allowing her the freedom to go in any direction with her business.

Seasonal ingredients, many sourced from local farms through Freshlist, and customer preferences would dictate what she produces. A large purchase of frozen strawberries from last year’s harvest from Cody Strawberry Farm in Richfield, where Wilson herself grew up, got her started on the sweet side. Freshly milled flour from Carolina Ground goes into much of what Wilson bakes—from pot pies to fruit pies to strawberry shortcake with a crusty, pillowy buttermilk biscuit, served with cooked strawberries and fresh whipped cream from Homeland Creamery.

“I love the chance to have spontaneity and create whatever inspires me in the moment. And there’s so much available in North Carolina—a lot to be inspired by,” she says.

Heading into the spring, new offerings include a pie featuring the flavors of carrot cake and a strawberry lemonade pie with a Christina Tosi-inspired milk crumble. Expect zucchini and tomato pies in the summer, and other variations that will change with the seasons. 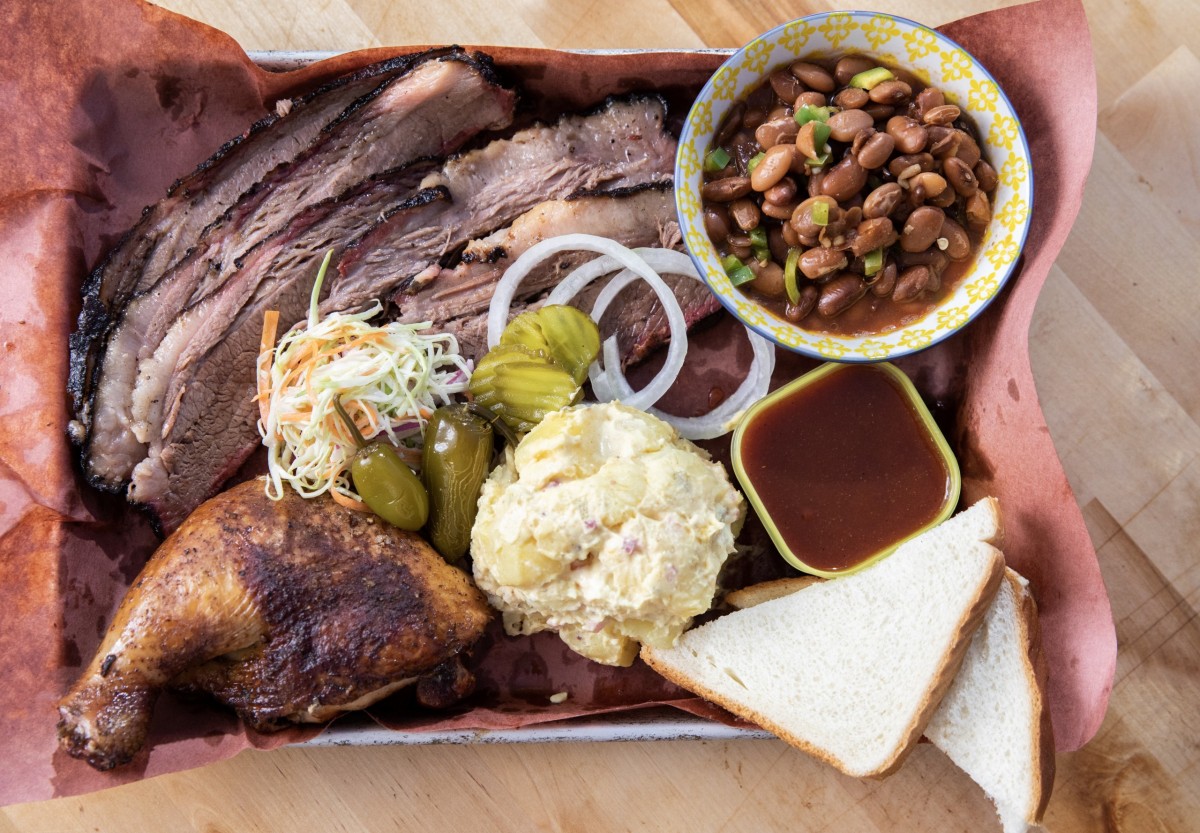 Belfer has a rich resume in Charlotte, having worked at top spots from The Stanley with Paul Verica and next door at The Crunkleton, The Asbury under former chef Matthew Krenz and current chef Mike Long, and Kindred and Hello, Sailor under Joe Kindred and Craig Diehl, to name a few. Prior to that, and prior to moving to Charlotte to attend Johnson & Wales, Belfer visited Charlotte often to see his grandparents from his hometown of Pleasanton, outside of San Antonio. And he carries that south Texas style to his food. “It was time for me to put myself out there. I wanted to bring to Charlotte the flavors I grew up on and love,” Belfer says. 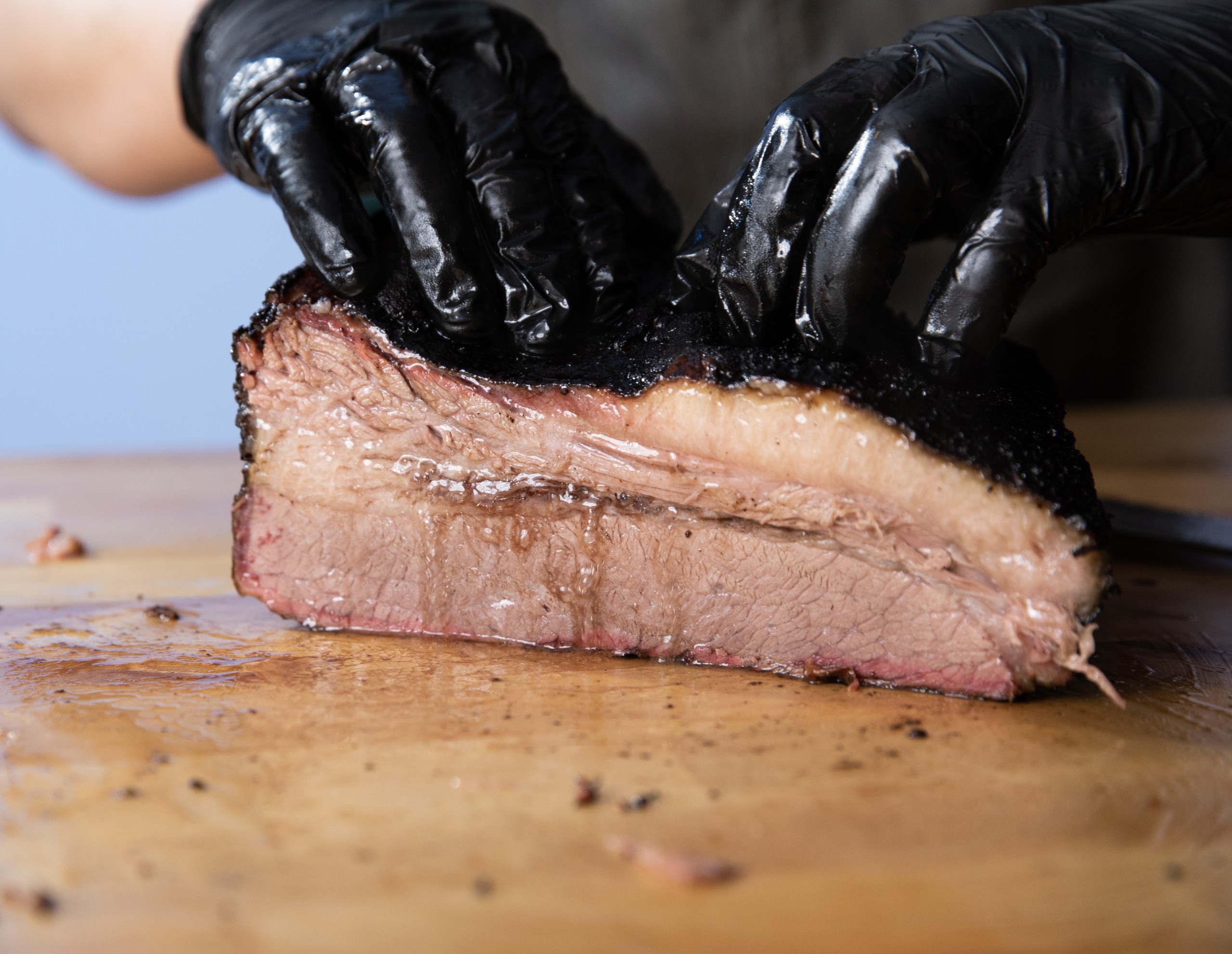 But why Wonder Bread? “Almost every barbecue restaurant in Texas, you get your barbecue served with a piece of Wonder Bread,” Belfer explains. “All the fats from the meats are dripping on the tray, mixing with the sauce, and you take that Wonder Bread and you scoop all that up.”

Belfer and his girlfriend, Tori Macauley are the only employees, with a third and fourth in the works. But a walk-up, counter-service brick-and-mortar spot is the eventual goal, similar to Franklin’s in Austin, Belfer says. For now, Smoke Show BBQ uses the space at Crown Station in NoDa for its pop-ups. Again, following the standards of Texas barbecue joints, Belfer sells on a first come, first served basis. And when it’s gone, it’s gone. The concept seems to be working. At his last event, Belfer sold out of 70 pounds of brisket in an hour-and-a-half.

“Texas barbecue, you have to get up, go there,” he says. “They don’t have a close time. It’s 11 o’clock until sold out, walk-ups only. The earlier you get there, the better chance you have.”

The term “Meshugganah” is a Yiddish word that refers to an individual who may be a little out there—a wild card. And according to chef owner Rob Clement’s family, that person is him. After a series of careers from poker dealer to IT professional to football coach to his position as chef of The Porter’s House in Waverly, Clement wanted to return to his roots.

“The idea of cooking Jewish food has been on my mind forever. It’s been a long time coming,” Clement says.“I was doing cooking classes. There’s a group of three Jewish families in town where their teenagers were out of school, out of extra-curriculars. They enjoy cooking. They asked me if I would do one for their kids. Then the kids asked if I could do Shabbat dinner with them.” (Shabbat, or the Jewish day of rest, begins on Friday at sundown and ends on Saturday at nightfall.)

Still, the turn away from fine dining and to a deli-style Jewish food business was a new idea to Clement. After his departure from The Porter’s House in May 2020, it was a suggestion from Matt Martin of Freshlist (himself running an ice cream pop-up with Adam Duke of Duke’s Bread), that gave Clement the idea.

“I’ve never had the opportunity to cook food exactly how I want to,” Clement says. “So, I just decided, why don’t I do Jewish food?”

Classics range from matzo ball soup and potato latkes to babka and black and white cookies prepared by pastry chef Hannah Woociker. But it’s the pastrami sandwiches—made from local beef from Shipley Farms Clement corns for two weeks, then smokes himself—that bring the crowds. It’s slathered with Lusty Monk Mustard from Asheville on Verdant Bread’s seeded Jewish rye and served with house-made sour or half-sour pickles during cucumber season. Breweries like Free Range in NoDa see lines an hour before Clement sets up shop, selling pre-orders and walk-ups until he sells out, which he has done each time Meshugganah has popped-up.

After a write up by local journalist Lauren Corriher in Southern Living magazine and the hoopla that would follow, Clement’s move to a permanent space seems all but inevitable.

None of these spots is exclusively tethered to a building lease. Many rely on the help of friends and family. And all feature very few menu items, allowing for a specialization not often seen in Charlotte restaurants.

The effects of the pandemic have been felt by all, but this group has used that time to occupy open spaces in the local food scene. Each pop-up relies on identifying a niche, looking inward, and sharing the love they’ve found during such difficult times so we can feel it, too.