Renovations render a home made for sharing in Foxcroft 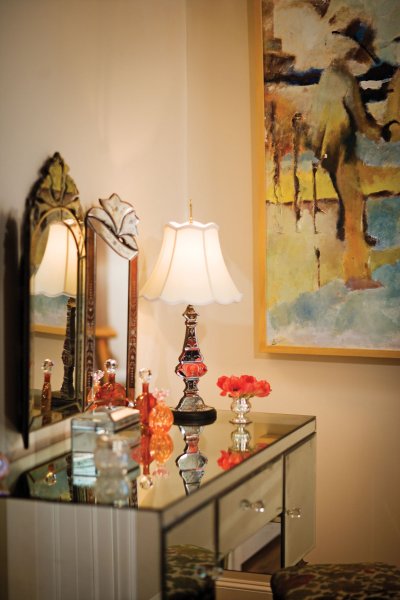 A custom antique glass vanity with ice cube knobs created by Old World Mirror of Charlotte sits in the corner of the master suite.

This fall, Pam and Gilbert Galle’s youngest child goes off to college. Instead of downsizing to a condo in Center City or a townhouse in Myers Park as many empty nesters do, the couple is staying put in the Foxcroft home they’ve lived in for almost twenty years. The couple’s recent interior design makeover further emphasizes that they have no intention of leaving their nest. If anything, the Galles want to share it.

With just under 5,000 square feet of carefully planned space, Pam and Gilbert frequently host dinner parties, meetings, get-togethers, and rehearsals, as Pam is the executive director of Pi Productions, a Charlotte-based theater company. During holidays, they entertain close to twenty people when their extended families get together. Pam boasts that she can sleep fourteen without using a sofa.

Throughout the years, the Galles, who have three children, have done renovations as their family’s needs have evolved. They’ve turned the screened-in porch into a sunroom with skylights, gutted their kitchen, added a media room above the garage and a schoolroom on the second floor (Pam home schooled their youngest son, Peter, for a couple of years), raised the ceilings in the foyer and master suite, and reconfigured the master bath. Oh, and then there’s the wedge-shaped patio they added, where, during the warmer months, you’ll find Pam doing yoga.

“You know we got a lot of flack, which I think that you do when you get to be the age that we are and with our children leaving, as to why you would want to renovate a house and add space,” says Pam. “What we hoped to do was to create a space where people could gather and, really, we’ve done that.”

Amy Vermillion, an allied member of ASID, who owns Martineau Vermillion Interior Design, has been working with the Galles for four years and is responsible for their home’s latest evolution. She also designed the interior for their Pinehurst home, which is for sale, and is in the beginning stages of furnishing the Galles’ latest property, a flat in a historic building (circa 1845) in Charleston, South Carolina.

When Vermillion began working with Pam on the master suite, Pam wanted to get rid of everything in the room. After looking around, Vermillion convinced her that certain pieces needed to stay, such as the mahogany rice bed (which perfectly matched the built-in mahogany wardrobe), two Tiffany-inspired antique lamps, and a rattan woven bench. To complement those pieces Vermillion added two side tables, one from Baker and the other a find, and designed a custom antique glass vanity with ice cube knobs for the space.

“Because she’s an actress and so involved in theater, I kept saying to Pam that she had to have a glamorous art deco vanity. I could picture her getting ready to go out and putting on her makeup,” says Vermillion, who measured Pam’s curling iron and hair dryer to design a specific space for those items in the vanity. “It’s so Hollywood.”

Gilbert and Pam are lovers of art and paintings by North Carolina-based artists Dave Isenhart and Kincheloe further bring color to the neutral walls of their bedroom. Throughout their home, lights highlight their art collection. “We had all of this art and wanted to collect more,” explains Pam. “We wanted to be able to show it properly.”

The dining room serves as the nucleus of the Galle household, as you can exit to the foyer, kitchen, sunroom, and den from it. A large round alder wood table sits in the center of the room and can accommodate up to ten people. Pam says it works well for meals or meetings. An antique-inspired sideboard designed by Vermillion sits in the corner offering storage space, while paintings by Wolf Kahn hang on the walls.

The focal point of the kitchen is a John Buckle painting of a woman with her hand on a Bible, a Valentine’s Day present from Gilbert. The now-defunct Charlotte Repertory Theatre commissioned the piece when it produced the play Benedictions, in which Pam played the lead role.

Vermillion captured the fiery orange of the painting’s background with contemporary floral window treatments in aubergine and burnt orange. “It’s a modern take on a floral,” says Vermillion. The window treatments also highlight the oak hardwoods, which run throughout most of the home.

A wool multicolor strie carpet leads up the back stairs from the kitchen to the media room. A built-in entertainment center lines one wall, while another hosts a series of gigantic window seats. “Pam wanted people to feel comfortable and to be able to relax in the space,” says Vermillion.

In the media room, Pam has rehearsed two of the three plays her company has produced. She also uses this space for meetings. “It’s large enough to seat quite a few people,” says Pam. “When we did the first reading of The Eyes of God, we did it up there, and there were eighteen cast members plus we probably had seven or eight people watching.”

Pam’s downstairs office is perfect for facilitating smaller meetings. “This room is all about fun, funkiness, and inspiration,” says Vermillion, who found a table with casters by Topdeq to serve as the room’s conference table. When it’s not in the center of the room being used to brainstorm Pi Productions’ next play, it can easily be rolled out of the way.

Hot pink and pale celery valances with hammered nail heads accent the room’s green-washed walls as do the fuchsia and aubergine pillows on the lime pullout sofa. Vermillion also added a silk-and-wool geometric trellis rug by David Hicks. “This room is very Pam,” she says. “This is where the ideas start.”

With two seating arrangements, the sunroom offers more of an intimate gathering space. One furniture grouping is made of a woven water hyacinth, and the other features a leaf-green fabric. Vermillion accented the leaf-green sofas with multicolored crewel pillows as well as pillows featuring a grape and leaf-green paisley fabric. “We worked on bringing more of those outside natural colors in,” she says. Framed antique botanicals and a grass arrangement further carry out the idea.

The front seating room, punctuated with four leather club chairs, is also known as Gilbert’s office. The space includes an air filter because Gilbert, who is a partner in a money-management firm, likes to smoke cigars.

“When we have parties and particularly when we have parties with actors, people tend to gravitate toward that room,” says Pam. “A lot of actors smoke, and they always think they have to go outside because most people don’t allow smoking in their house.”

Pam remembers having the cast of The Exonerated, Charlotte Rep’s final show, over to her home a couple of times. “About eleven o’clock Gilbert pulls out scotch and we all went in there, and the place was packed,” recalls Pam. “We were smoking in that room and telling stories. It was really great.”

This article appears in the Home & Garden July 2007 issue of Home + Garden.
Contest of the Month