STEFANIE JOHNSON, owner of local company SpaceLift Decorating, wasn’t so sure about this house. Her husband, Lee, brought her to look at a home for sale in Dilworth in spring 2013. They were a growing family and needed more space than their Elizabeth home had, but this new option had a choppy layout, and, typical of a house built in the early 1940s, the kitchen only had room for one to cook comfortably.

When Lee, who works for KimCo Realty, pulled out his graph paper and drew a to-scale drawing of what the home could become with a few adjustments and an addition, she agreed the home had potential.

“Once I saw it on paper, I started to see the vision,” she says.

They brought the designs to a good friend and general contractor, and he priced the plans. It was doable, they thought, so they bought the house, and four months later, construction was done and they moved in. 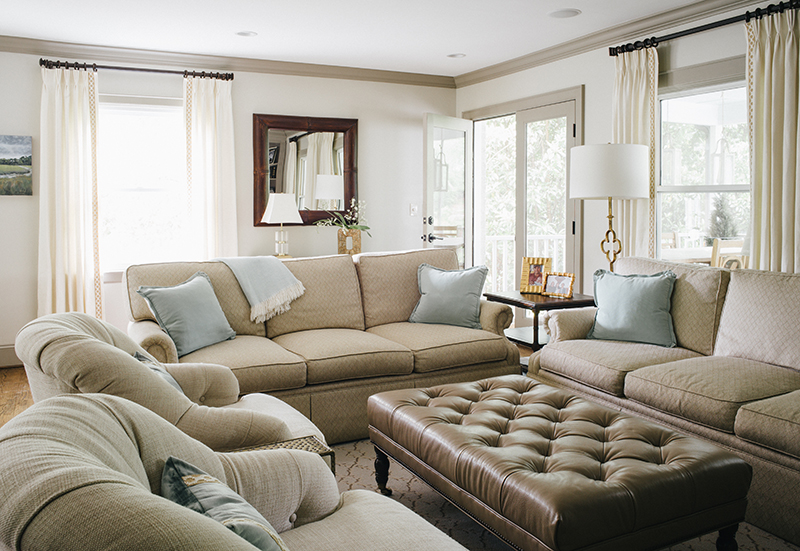 Stef, who is from Myrtle Beach, brought her love of the beach to her urban home, with neutrals and blues creating a relaxed ambiance throughout. The walls are a warm shade of gray, Sherwin Williams’ Accessible Beige, accented with Shenandoah Taupe by Benjamin Moore. Touches of sea-inspired décor—a mirror made with oyster shells, for example—continue throughout the home. When these are combined with the blue accents, the décor is like a deep breath.

“My personality is such that I like a calm environment,” Stef says. “I like things Zen as much as I can get them.”

The most-used room in the house, the kitchen, is built for entertaining—something the Johnsons do often. A large center island topped with walnut has four bar stools, covered with a vinyl fabric to keep them spill-free. An entryway across the island from the chairs leads to a dining room, with a round, maple table Stef designed and asked a local wood artisan to create. A wooden chandelier hangs above, shaped like a droplet surrounded by candle lights, while custom chairs surround the table.

Stef admits the light fabric in the family room, on the other side of the kitchen, may not have been the best choice for a home with two young girls—Emilie is 5, Charlotte is 2, and they have a fur sibling, Lela. But she treated the fabric with a fabric protector, which has helped keep the furniture kid-proof.

The Wesley Hall sofas and chairs help define the living room, even without a wall dividing it from the kitchen. In the middle, an oversized ottoman welcomes big and small feet. Outside the windows, a screened-in porch with a sofa, chairs, ottoman, and dining set awaits warm days. For the patio, family room, and dining room, Stef bought new furniture—something she waited to do for a long time.

“To be honest, we definitely were putting our money in the piggy bank and saving to do this right,” she says. “I was making a number of pieces work that I didn’t necessarily love at our old house.” 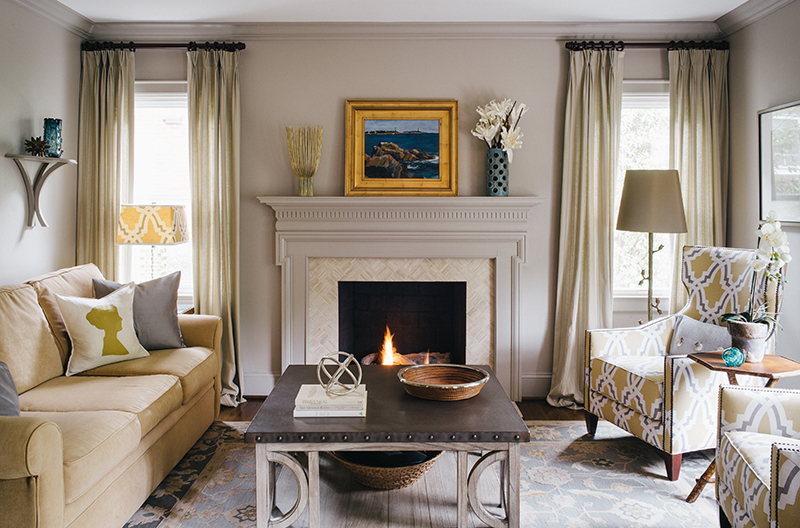 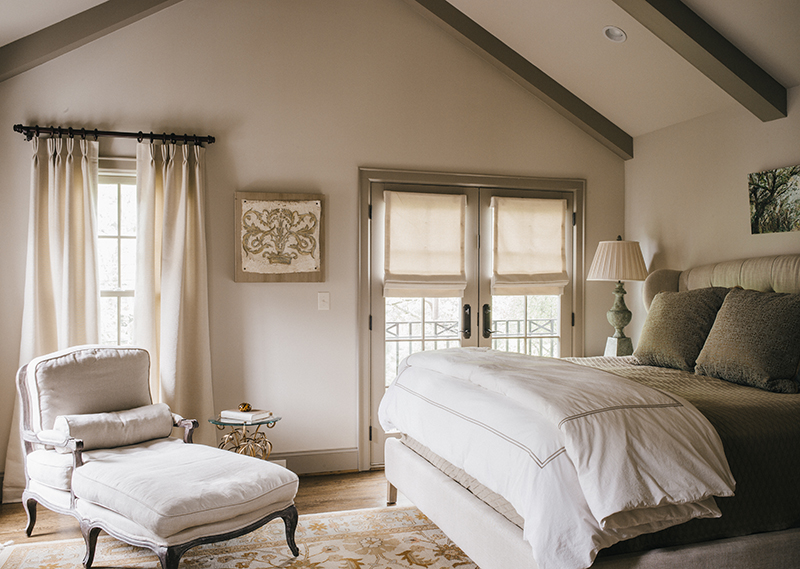 The neutral colors throughout the home create a calming environment.

The new stairwell, which was once in the kitchen but was moved off the hallway during renovations, leads upstairs to the girls’ rooms. They bought the house before Charlotte was born, and were thankful to have another girl, as there’s only one bathroom upstairs that the two will grow up to share. The rooms are connected by a landing area, and under one window, there’s a nook. Stef decided to cover the entrance with burlap, and the girls call it their tent. They can often be found doing puzzles or reading in it.

The renovations also called for an added master suite at the back of the house. Their room is brightened with natural light; double doors open to a view of their lush backyard, larger than most city lots. Birds chirp throughout the day, and deer roam through—sometimes, even a fox wanders in the grass. This room continues the calming influence; it’s decorated in neutrals, with artwork lending much of the room’s color.

Giving up her old home in Elizabeth was difficult; Stef learned to love that home, which was built in the 1920s, for its charm. Each scratch gave the home character, as did the three different kinds of wood flooring. Sitting in her new kitchen, she walks over to a section of hardwood flooring, about six feet by 12 feet, where the floors run a different direction from the rest of the house.

“This must have been an addition,” she says, laughing at the mismatched section. In spots such as this, she finds the character she loves—character that tells the history of the home.

Even after the construction, the home’s old character gets a chance to show through, with smartly chosen pieces that don’t overwhelm it. She and Lee are both minimalists, Stef says, in a statement that holds true in this décor—there’s no clutter anywhere in the house, just thoughtfully placed photographs, artwork, and memories.

“If we can reuse something or repurpose (it), we do,” she says. “We also like to purge a lot. So knowing that we could save the home and keep most of it in the grand scheme of things made us excited.”