A Touch of Basil

Uptown's newest restaurant has good food -- and a good story

When brothers Henry and Chai Eang opened their first restaurant, Basil Thai Restaurant, in Charleston in 2002, they did it on a shoestring. Originally from Cambodia (they lived there under the Khmer Rouge in the 1970s), the brothers were refugees briefly in Thailand before moving to South Carolina in 1979. When they decided in 2000 to start a restaurant, they had little money but knew exactly what they wanted. They moved into an old Huddle House diner location and got creative on how to give it the chic, modern look they had imagined. Chai installed the hardwood floors himself, and together the brothers helped design the stylish interior. "It was a lot of manual labor," says Chai.

Things have changed a lot since then. The Charleston location opened to brilliant success and fills up with hundreds of guests weekly. Taking advantage of its popularity, the brothers opened Chai's Lounge and Tapas next door, which quickly became another local favorite. Now, seven years later, they've opened a second Basil Thai, in uptown Charlotte.

Moving to Charlotte seemed the natural next step for Chai, who worked at the Morton's steakhouse here in 1995 and 1996 and has considered the city for a new location for a long time. "Charlotte has an overabundance of steakhouses," he says. "People are looking for something different."

"Something different" definitely describes Basil. The restaurant, which faces the corner of North Church and Fifth streets, isn't your average Charlotte Thai restaurant—or even your average uptown restaurant. Large windows facing both streets make the space bright for the lunch crowd and give it an urban ambience after dark. Designed by the brothers and Charleston architect Neil Stevenson, it has a chic, modern interior. Chocolate brown leather chairs flank gray granite-top tables. Silver, modern lights hang low over the dining area and a floor-to-ceiling scarlet-red curtain gives a deep splash of color to the space. Guests seated at tables can see into the kitchen or can choose to watch their food being prepared up close from the bar facing into it.

The food is innovative as well. Fresh basil rolls ($5.95) are served cool, with an entire basil leaf visible inside through the thin rice-paper wrapper. The stuffed shrimp ($9.95) steals the show for the appetizers. Large, tender prawns in an egg-roll wrapper are at the perfect level of spiciness and are well complemented by the sweet and sour sauce. Five come with each serving, but, trust us, you'll want more.

Henry Eang leads the kitchen, working with the restaurant's two chefs, Kai Zhang and Ivan Rodriguez, both of whom trained under Cherdchoogarm in Charleston before moving here. The brothers run the restaurant, with Henry working the kitchen and Chai working the crowds. However, in a few months they'll be splitting up.

"It is still a family business," says Chai. "But Henry will be leaving eventually. I'm moving in here. I like Charlotte and I think there is the opportunity for something else here."

Sarah Crosland is associate editor of this magazine.
Email: sarah.crosland@charlottemagazine.com 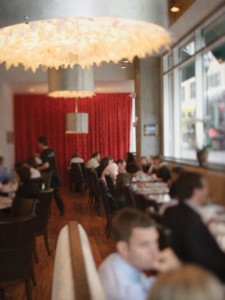 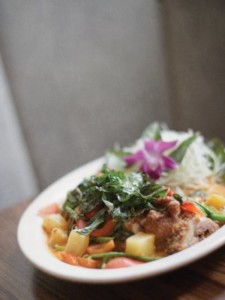