After His Own Wedding, a Writer Reflects on Same-Sex Marriage’s Evolution

I ALMOST MISSED my own wedding. Not because of cold feet or changed hearts, but, rather, because of a heater.

My then-fiancé, Nate, took the day off work on the last Friday in October for two reasons: to have a technician fix an obstinate heating system that refused to both heat our home and stay quiet, and then, after that, to get married.

The problem was, the technician’s window of 8 a.m. to noon stretched to 1 p.m., and the courthouse stopped accepting soon-to-be couples at 3:40 p.m.—3:45 if the man behind the fold-up table was feeling particularly generous.

Nate and I planned our “actual wedding” two weeks later with nearly 200 of our family and friends attending, but open-enrollment season was approaching, and our officiant, Adam, Nate’s best friend from college, was neither a real magistrate nor had he ever attended another wedding before in his life. In short, we wanted to make sure this whole thing was legal and that we had health insurance come January, and not just fond memories of that day we went to a field with 200 of our friends and said nice things about each other.

This is how I found myself at 3 p.m. on that drizzly Friday, still at work, still unmarried, texting my fiancé about the heating system and wondering if we’d have to pick between noisy heat or a lifetime of affordable medical care.

That wasn’t a choice we had to make, of course. We could have legally bound ourselves to one another the following week just as easily, but the county’s magistrates are only available to marry couples on specific days at limited hours, and some of those days, the marriages are at the jail (and neither Nate nor I wanted to get married there). To put off the event was a bad omen—not a great start to a happily wedded life.

No, this was the day. It just had to be. It was a meaningless deadline we had set for ourselves, but to push this back was to accept defeat, to withdraw and concede from ourselves and our future before it had begun. 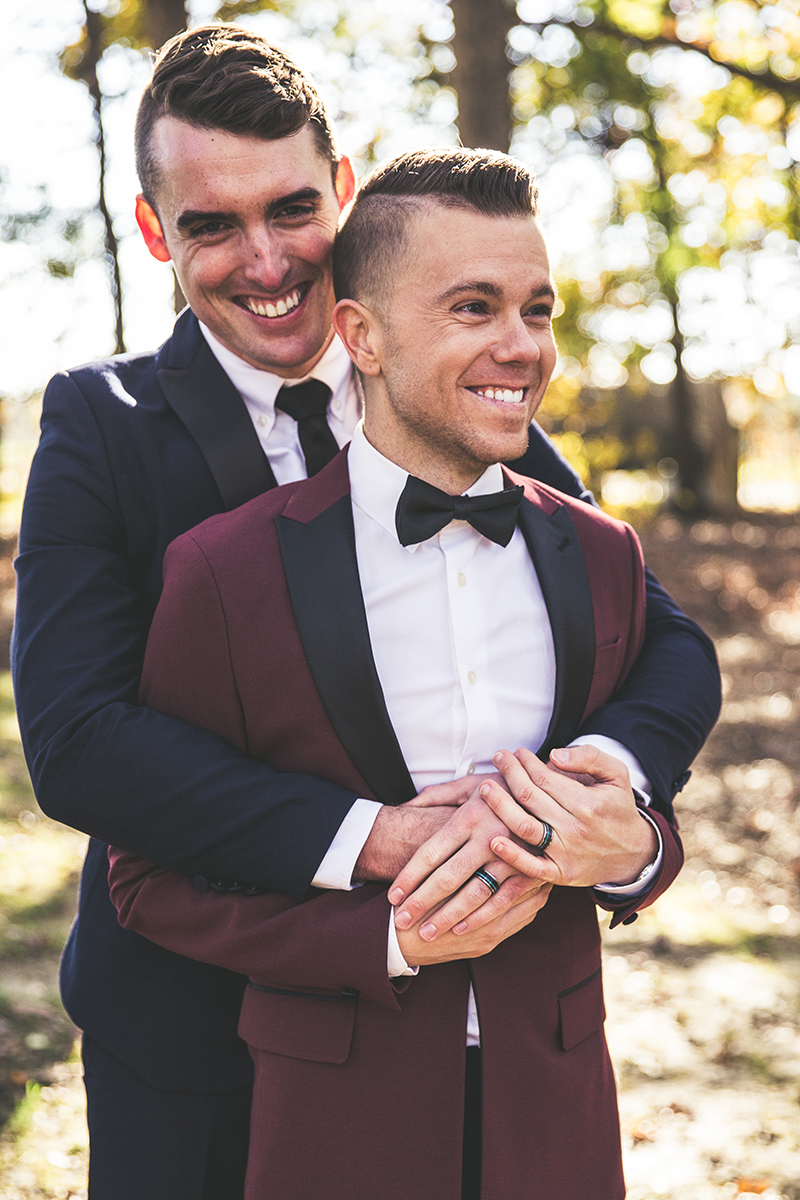 No photos are allowed inside the courthouse, but Jared and Nate hired a professional photographer for their formal ceremony.

Stressful, time-crunching details aside—running in the rain from the Register of Deeds to the courthouse with 10 minutes to spare; waiting anxiously for our second witness, who insisted on driving the four blocks through uptown and looking for parking at the courthouse—Nate and I got married that cold, gray day.

Our magistrate sat atop her courtroom throne, said some official words, asked if we wanted to take each other forever as one another’s lawfully wedded spouses, and then it was over. In the span of five minutes, I had made a decision that would affect everything from my life insurance beneficiary to what brand of hot sauce I’d buy until the end of time.

A woman wearing a headset rushed us out just as quickly as she’d rushed us in. Now that we were married, we were old news, reduced to a single file in a dense archive of names. There were no flowers, no confetti, no rings, even. There were other couples to marry, so hurry on out of here, thank you.

In a word, it was routine. And that, perhaps, is the biggest triumph of all.

Nate and I and thousands of other LGBTQ Americans have grown accustomed to the notion of equitable access to marriage and the rights that come along with it (inheritance, hospital visitation, equitable divorce, even) that we so easily forget our history as a persecuted people, shamed into secrecy, spat upon, and hung from fenceposts to die. We so recently fought to simply be acknowledged and named, to not have our entire community clinically denigrated and categorized as a genetic defect or psychological disorder, to have our murders recognized as hate crimes, that for so long, to imagine the pageantry of marriage was fantasy. To talk of marriage, then, as routine, even boring, seems blasphemous to the people who came before us, the queers who died hanging on fenceposts, fighting to vacuum their homes in peace like everyone else. It denies the scope of the magnificent social triumph this all still is.

But with privileges comes complacency, and so, with deference to my elders, this wedding was a snooze-fest.

Our judge didn’t question two men getting married, nor did she turn away or grimace when she asked us to kiss. Lolita, the bejeweled clerk at the Register of Deeds, didn’t excuse herself to the back to finish up paperwork to delay our marriage. Instead, she talked to us about the dreadful weather and packed up our paperwork in a plastic bag so it wouldn’t get wet on the mad dash to the courthouse. Hurry on now, she said, you don’t want to be late.

I misspoke when I said Nate and I could have just as easily gotten married any other day. That’s not the whole truth. On walks with our dogs throughout the late summer, after the Supreme Court justice who so eloquently enshrined the legality of marriage equality relinquished his seat, Nate and I had somber discussions on whether the idea of marriage equality would soon return to that world of fantasy where it had for so long existed. Certainly, it would be harder for the state to retroactively dissolve our marriage than to prevent it from happening, we told ourselves. Perhaps, we feared, one day soon amid our complacency, this all won’t be so normal. Will we have fought hard enough to remain banal, unthreatening to the majority?

For now, as we spend our first Valentine’s Day as a legal couple, reveling in our exciting lives of watching Netflix and arguing over who gets to clean the shower next, all we want is to be as boring as the couple who walked into the courtroom after us.

And after all that, our heater still clicks. So, like everyone else, we’ll have to call the technician again and wait.

We’ve only got forever.

Head here for a courthouse wedding how-to guide for Charlotteans.

This article appears in the February 2019 issue of Charlotte magazine.
Categories: In Print, The Buzz