"THAT'S THE STORY of Saxapahaw in a trash pile,” says Suzanne Nelson, the Capitol Hill reporter turned full-time farmer of Reverence Farms, just inside the village of Saxapahaw. She’s behind the wheel of a Polaris UTV, zipping past pastures of grazing cows, sheep, hogs, chickens, and turkeys, and she stops to point out a heaping pile of compost layered with scraps from local restaurants and businesses.

Though not nearly as photogenic as the village itself, this decomposing mound is indeed evidence of the symbiotic relationships that exist in Saxapahaw. In recent years, this hideaway along the Haw River—two hours northeast of Charlotte—has attracted a legion of creative entrepreneurs who’ve helped shape its second life. Retired textile mill buildings now house such businesses as a bookstore, brewery, butcher shop, yoga studio, and farm-to-table pub.

In the screenplay of 21st century Saxapahaw, there is no shortage of impassioned characters like Suzanne, nor beautiful settings, such as her Joel Salatin-inspired farm. And if Saxapahaw is a screenplay, its director is Mac Jordan.

Mac’s family owned and operated the Saxapahaw Cotton Mill from 1927 to 1978. As a kid in the 1960s and ’70s, Mac grew up walking to school and playing in the woods by the river. In high school, he worked doing maintenance at the mill, from cleaning the filters of giant, saucepot-shaped extractors to wiping lint from fluorescent lights. As manufacturing in the United States declined, Mac watched his hometown wither, the mill village eventually void of people, its buildings mere bones.

He studied public policy at Duke, then focused on historic preservation and community revitalization while getting a master’s in architecture from N.C. State. His thesis? A revitalization plan for Saxapahaw. “I saw the possibilities that reuse of an industrial complex could have on revitalizing a place, and I said to Dad, ‘If the mill closes, that’s what Saxapahaw needs to do.’”

In 1994, the mill, then owned by Dixie Yarns, spun its last thread. A year later, Mac’s father, John, with his visionary son by his side, bought it back. Mac called his brother, Carter, who was busy building log homes in Jackson Hole, Wyoming, and asked him to come home and help. Together, the Jordans have been the impetus behind Saxapahaw’s return to the kind of close-knit community Mac remembers from his childhood—albeit one with lattes, rockabilly concerts, and chef-driven food.

The brick buildings along the Haw River where cotton was once spun and dyed are now home to Saxapahaw’s attractive array of storefronts. Haw River Farmhouse Ales occupies the old mechanical room, where water was purified for dyes. The dye room itself is now the Haw River Ballroom, a music venue. The Eddy Pub’s bar is built atop yarn bins; mill room floor planks form its tabletops, and its beer taps are old steam valves. Saxapahaw General Store and Shiftwork, a co-working space, are in the old worsted-spinning mill, a 1950s addition where cotton-poly blend yarns were spun. Haw River Canoe & Kayak Co. resides in the first floor of the old community center. Upstairs, where mill workers and their families once played Ping-Pong and basketball, you’ll find the creative nucleus of Paperhand Puppet Intervention, whose traveling shows involve giant puppets and masks, stilt dancers, and live music.

The Saxapahaw General Store, known by locals as simply the Store, is a fine place to start a tour. Outside, you can fill up with biodiesel or regular unleaded, and inside, Sun Drop or kombucha. This unconventional gas station/convenience store serves three meals a day, many of its ingredients coming from nearby farms. Hot dogs on a roller grill, it ain’t. In a laminate booth flanked by aisles of groceries, hardware, and engine oil, you can tear into salmon Florentine with poached eggs and lemon-caper hollandaise, a house-corned beef reuben, or a pan-seared duck breast salad.

My satiated state, post-Saxapahaw General Store bánh mì, doesn’t stop me from wandering into Left Bank Butchery, a few doors down, to pick up my strangest travel souvenir to date: two porterhouse pork chops, freshly carved from a hog raised a mile down the road at Cane Creek Farm. “Since we cut those this morning, I’ve been wondering who the lucky soul would be who would walk away with them,” says Dustin Dahlin, the dreadlocked butcher behind the counter who guides me through the various cuts of local pork and beef. 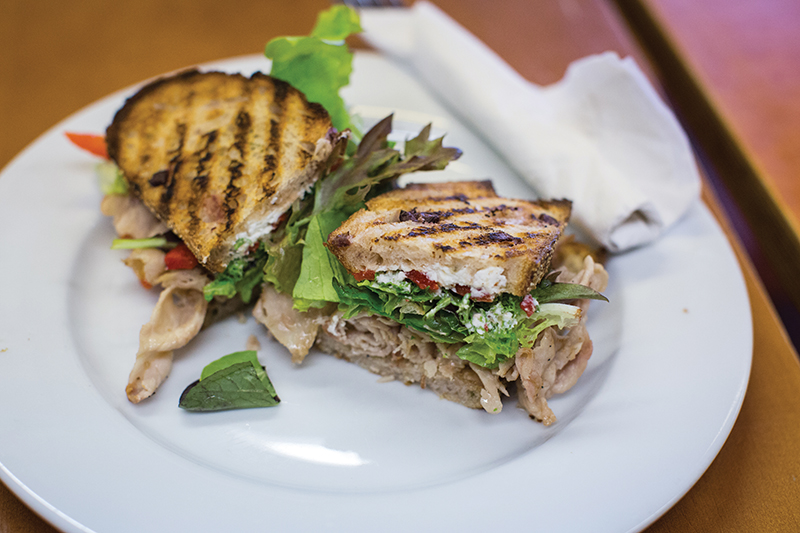 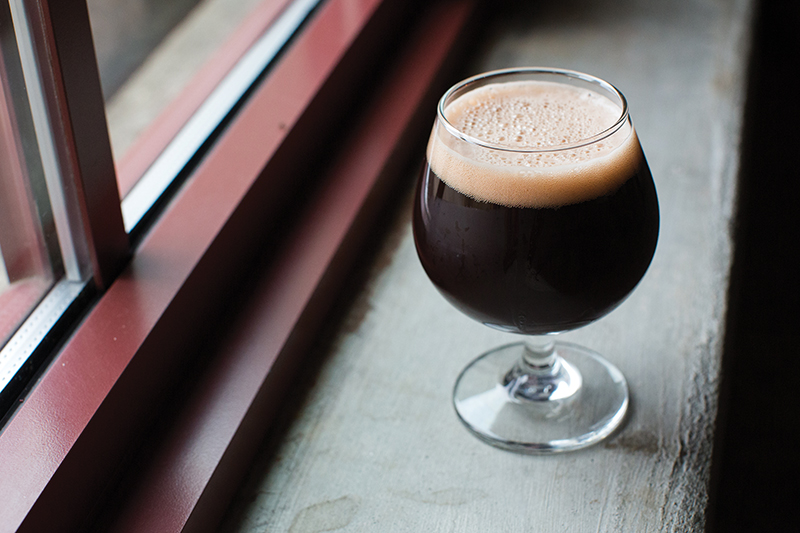 (Top) Don’t miss the house-smoked pork loin sandwich at the Saxapahaw General Store, which serves three meals a day. Wash it down with a beer from Haw River Farmhouse Ales, housed in an old mill building.

Down the street at Haw River Canoe & Kayak Co., I meet Joe Jacob, the longtime Saxapahonian who, in warmer weather, guides paddlers through the Haw’s Class I and II rapids. Inside the Red Door Bookstore, I cruise the aisles of carefully curated new and used books. And at the Saxapahaw Museum, a yardstick-wielding museum director named Jane Cairnes traces the town’s history for me, from the era of the Sissipahaw Indians to its mill town heyday and beyond.

By now I’m thirsty, so I make my way to Haw River Farmhouse Ales and take an empty seat next to a couple. I quickly learn that they moved here a year ago so their son could attend sixth grade at The Hawbridge School, Saxapahaw’s arts-based, eco-centric, tuition-free public charter school.

“Welcome,” says Dave Parins, delivering a warm smile and a gentle pat on the back.

Dave is a painter. His wife, Libby, is a psychologist. “We love it here,” he says. “It’s a very international community. Our tango teacher is French. We have lessons in the ballroom,” he adds, as if having a tango teacher were as quotidian as having a dentist. It’s a sentence unlike any other I’ve heard at a bar. But Haw River Farmhouse Ales is not just any bar—I’m drinking a seven-grain saison, after all—and Saxapahaw is not just any small town.

It’s dinnertime now, so I walk upstairs to The Eddy Pub, where co-owner Claire Haslam directs me to a seat next to Linda Pucci. Because it’s an unincorporated village rather than a municipality, Saxapahaw doesn’t have a mayor, but if it did, the title would likely belong to Linda, who fills her days with gigs that range from delivering Village Bakehouse bread to writing, editing, and distributing the town’s newsletter, The Saxapahaw Current. She’s the official note-taker of Saxapahaw Business Association meetings and plays Mrs. Claus in the annual Holiday Market, her wavy white hair perfectly fitting the part.

As I mentally prepare to slice into a seared ají dulce pepper, a dead ringer for a habanero, server Jennie Rasmussen stops by. “The heat is cross-pollinated out of them,” she explains, with a reassuring smile. Turns out Jennie picked these peculiar peppers—by day, she’s the head farmer of Peregrine Farm, about eight miles away.

There’s farm-to-table, and there’s farmers literally delivering food to your table. At The Eddy, nearly everyone on the staff spends some of his or her time in a field. Chef Isaiah Allen runs Rocky Run Farm with his wife, Whitney. Maggie Newman, behind the bar, works at Dancing Pines Farm. Line cook Victor Reed grows mushrooms. Manager Allyson Cartner owns Gnarly Rooster Farm. The list, I learn, goes on and on. 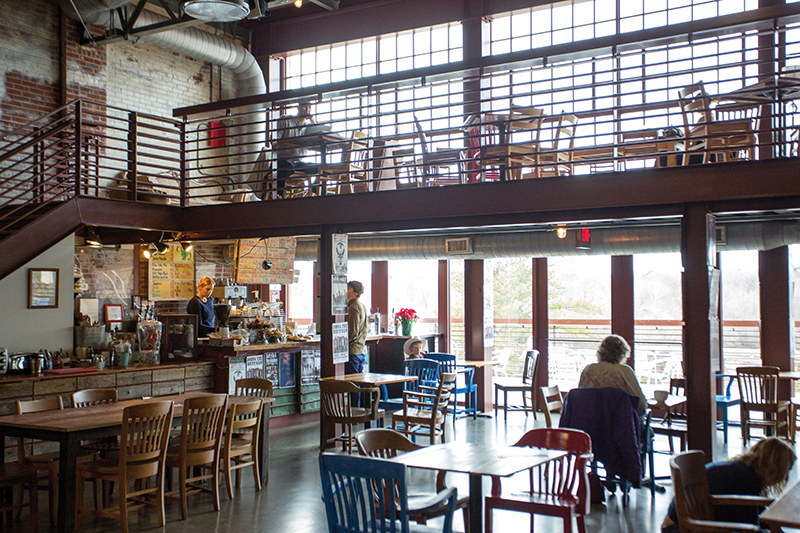 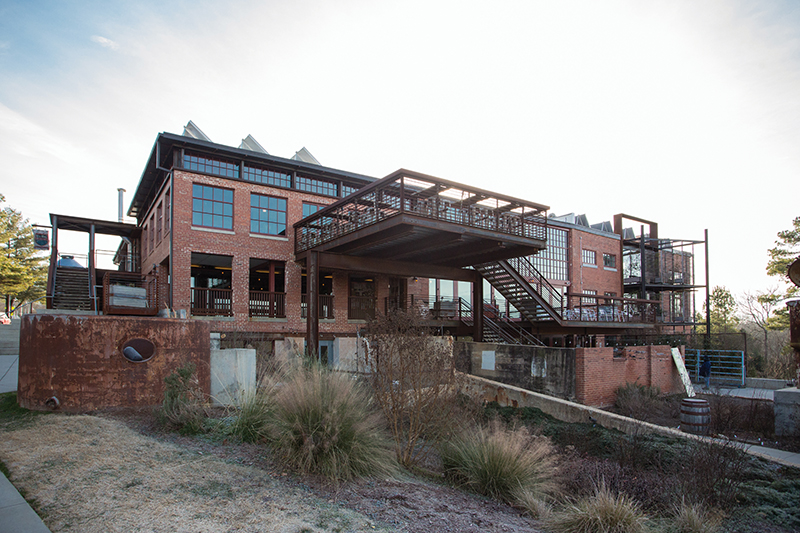 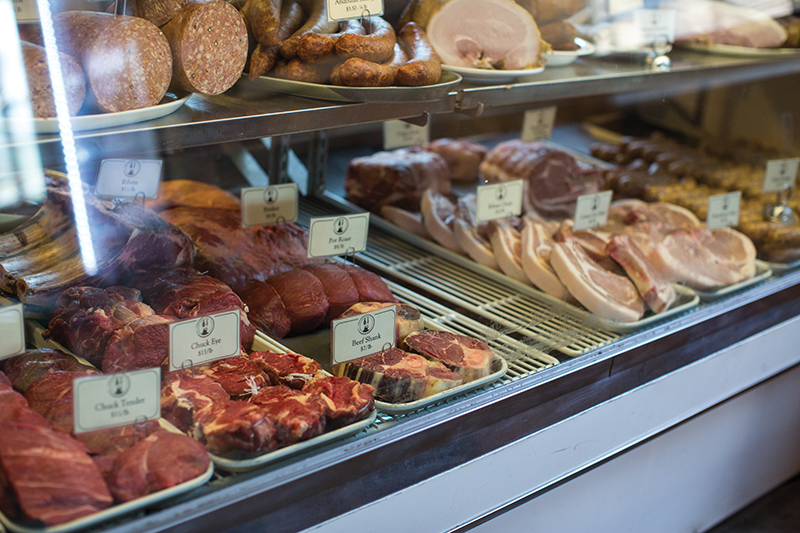 The next morning at Cup 22, the coffee shop, I find Linda, the “mayor,” mid-conversation with former Tar Heel and NBA player Tom LaGarde. He and his wife, Heather, moved here in 2003 and are responsible for starting the Saxapahaw Farmers’ Market and Saturdays In Saxapahaw, an outdoor summer concert series. They also run Haw River Ballroom and Cup 22.

At a table nearby, Mac Jordan, whose vision for this place has finally come to fruition, sits with Doug Williams and Claire Haslam, proprietors of The Eddy. Two tables over, Ben Woodward of Haw River Farmhouse Ales clicks away on his laptop. Then, Jeff Barney, owner of the Saxapahaw General Store, walks in. Soon, Dustin, the pork chop purveyor from Left Bank Butchery, wanders in and greets me by name.

Cup 22 cantilevers over the Haw River Ballroom, and I hear someone speaking through a microphone on the stage below. I grab a coffee and walk toward the railing. Underneath a canopy of stringed Edison bulbs sits a roomful of Hawbridge School students and staff, all eyes on author Daniel Wallace as he reads from his bestselling novel, Big Fish, which Tim Burton later turned into an Oscar-nominated film. I look around, my dumbfounded face silently asking “What the…?” But I’m the only one with wide eyes. Because in Saxapahaw, it’s just another day.

ALISON MILLER is a freelance writer based in Charlotte. Reach her via email at alisonlynmiller@gmail.com or follow her on Instagram:
@runofthemillers. 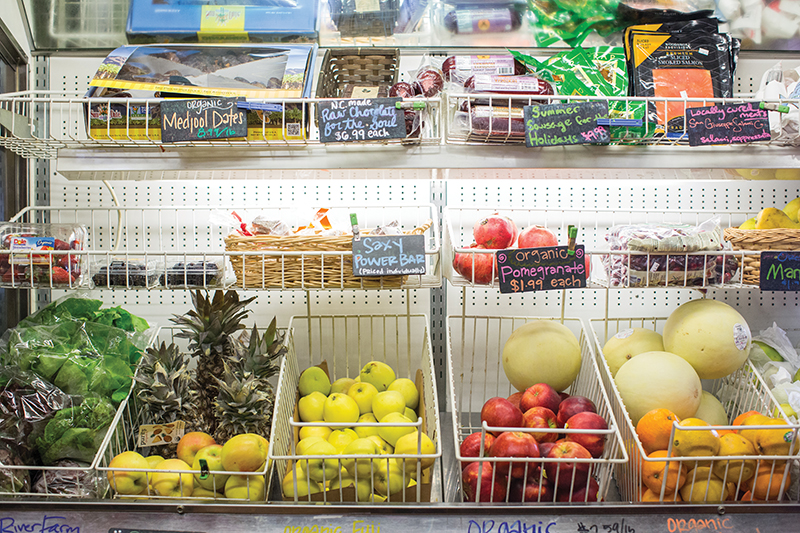 Reverence Farms Café
The food is comforting and the focus is on the farm, with ingredients sourced from Reverence Farms and other area producers. 6956 Hwy. 87 S., Graham, 336-525-2266

Saturdays in Saxapahaw
Free concerts are held May through August on a small outdoor stage alongside the farmers’ market.

Red Door Books
Can’t decide on a tome among this shop’s new and used collection? Try a “blind date with a book” by choosing from a display of paper-wrapped reads emblazoned with cheeky, handwritten synopses. 1616 Jordan Dr., Saxapahaw, 336-525-2553

River Landing Inn
A quiet dirt road a mile outside the village leads to this tranquil retreat, where you’re likely to see deer outside your window when you wake up. 5942 Whitney Rd., Graham, 919-602-0296

TerraStay
Opening in 2017: Four cabins overlooking the vegetable rows at TerraStay Farm, half a mile from the village. 5969 Swepsonville-Saxapahaw Rd., Graham, 919-491-1960

This article appears in the February 2017 issue of Charlotte magazine.
Categories: In Print, Travel
Contest of the Month