Behind the Bar with Larry Suggs of Crowntown Collective 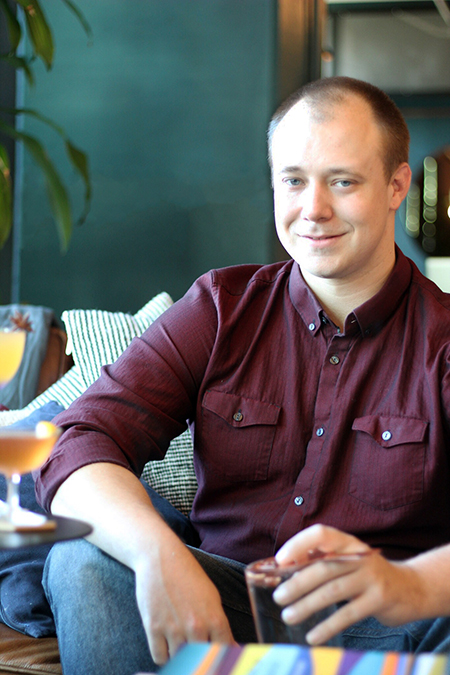 You might know him from: The Unknown Brewing Co., The Punch Room, Zeppelin
Hometown: Charlotte
Lives in: Collingwood, near Madison Park
Relationship status: Girlfriend, Amanda Britton of 204 North
Pets: A rescued pit bull named Barley Rye
Teams: Panthers and Hornets
Where do you drink when you’re not working? The Punch Room, Soul Gastrolounge, Haberdish, Moosehead Grill

You were working with Unknown Brewing for a while. How did you transition from craft beer to craft cocktails?

Being on the road in Charleston, opening up that market, being on the road in Raleigh and Asheville and seeing their food and beverage scenes really sparked a clear interest for me. I remember doing a tour of Charleston cocktail bars and drinking an old-fashioned at every bar and loving the experience and seeing how everybody’s old-fashioned was different. Not only every bar, but every bartender had their own take on a classic cocktail. So I got home and it wasn’t too long until I got back into bartending at Dandelion Market doing some craft cocktails there with them, then the Cellar at Duckworth’s working under Ron (Oleksa)… I went to New Orleans and was hanging out with Bob (Peters) from The Punch Room. This was the first time I really got to sit down with him and know Bob as a person. I think it was a few weeks later when the apprenticeship opportunity (at The Punch Room) came up and I was like, ‘I can take a step back to take 10 steps forward.’

Are you solely consulting, or do you have a home base bar?

Right now, we’re working under the name of Crowntown Collective. We’re a group of local bartenders and talent working together—it’s myself, Amanda Britton from 204 North, as well as a few other talented people around town who are helping. We just got done with a project at The Roasting Company on Central… That was really fun, and it was our first project that we got to work together, with a long-standing, Charlotte-owned business and somewhere I’ve been eating my whole life just about. Right now, I’m fully on Zeppelin because this is such a large undertaking and such a food- and culinary-focused place.

How do you approach each new project?

I like to start with their kitchen. I think everything starts in the back of house for me as a bartender, and it’s working with the ingredients that they’re already incorporating into their menu.

How did you meet your girlfriend, Amanda?

We met during the grand opening of Duckworth’s in uptown. She was a bartender there and impressed me with her beer knowledge and her wit. I think it was something that I just kept going back in because I enjoyed her company.

What would you say is Charlotte’s favorite cocktail?

Probably right now Moscow mules and old-fashioneds, depending on where you’re at. Sometimes they’re about 50-50. I think they’re both great gateway cocktails.

What will be Charlotte’s favorite cocktail this time next year?

I think we’ll step it up and be into the sazeracs and the vieux carres of the world, and I don’t know if it’s necessarily going to be like these old-school cocktails anymore. I think people are going to be more forward-thinking. I really enjoy low ABV cocktails—I think that’s already starting as a trend. Bob and Colleen (Hughes of Haberdish) have done great with those style of drinks.

What’s your plan for after Zeppelin?

I like to take things project by project, and right now I can’t afford to think too far into the future because things are changing so rapidly. I have been in talks with a few people about the first quarter of 2018 potentially joining on, but I think Zeppelin is a great place for me to sink into and really give everything I have. I’ve been fortunate to work with (chef) Vince Giancarlo and Ryan Hart, the head bartender here, and they’ve pulled so much creativity out of me. I’m probably feeling more enlivened than I’ve felt since I was at The Punch Room.

This article appears in the January 2018 issue of Charlotte magazine.
Categories: By Kristen Wile, Food + Drink, In Print