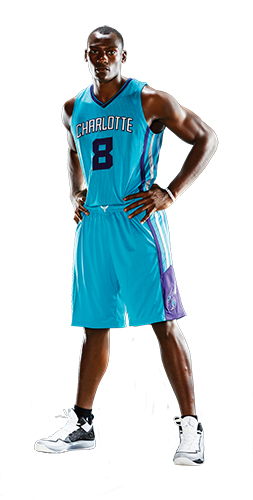 Bismack Biyombo
Position: Center-forward
From: Democratic Republic of Congo
Country you’ve always wanted to visit: Congo, because that’s where I’m from, and there is a lot of people in need of help. I try hosting basketball camps in each and every city I visit as a way to help people and give back to the community.
What do you miss most about the Congo? My dad, mom, and sister are still at home. Of course, I have my brothers here with me, but home is still home, and that’s what I miss most—my friends, my cousins, all the people that I grew up with. And, of course the home food is a big part of it.
NBA player you admired most as a kid: I admired Hakeem Olajuwon growing up because he’s one of our African leaders. Dikembe Mutombo is another player that I admire.
Given the choice, do you go with coffee, tea, or a protein shake? Protein shake

Cody Zeller
Position: Center-forward
From: Washington, Indiana
Secret talent that has nothing to do with basketball: I played tennis in high school—actually played doubles. I just stood at the net.
NBA player you admired most as a kid: Dirk Nowitzki: A big guy that could shoot really well. He doesn’t have the most athletic ability but is definitely one of the greats to ever play the game.
Growing up, when you wanted to annoy your older brothers, what would you do? I had a lot of tricks, especially if we were playing any kind of sport. I had to bend the rules a little bit. I had to get under their skin; it was my only way of making it even.
Coffee, tea, or a protein shake? I love sweet tea.

Jannero Pargo
Position: Guard
From: Chicago
Secret talent that has nothing to do with basketball: I can do backflips. I can tumble.
What’s your favorite thing about living in Charlotte? It would have to be the EpiCentre. I can go out to eat, watch games, or dance—all in one place.
You’ve played for the Hornets in New Orleans, and now you’re a Hornet here. What’s the difference between the two teams? You can just feel how much the name really means to a lot of the people in this community. The great Hornets teams that were here before us—they had this winning culture. We are trying to bring that back to Charlotte.
Favorite place to take your kids in Charlotte: To a pool. My kids love to swim. Anytime I can take them, I’m up for that!
Coffee, tea, or a protein shake? Tea, definitely.

Marvin Williams
Position: Forward
From: Washington state, although he attended UNC Chapel Hill
What’s your favorite thing about living in Charlotte? Just being back in the Tar Heel State. I’m only two hours away from Chapel Hill, and I get to hang out and work out with those guys I played with in college.
Where can we find you in Charlotte when you’re not practicing or at a game? At home. At my house or Sean May’s house—one of two spots.
Who are your favorite fellow Tar Heel alums? Sean May, Raymond Felton, and Deon Thompson.
Secret talent that has nothing to do with basketball: I can do a Rubik’s Cube.
Coffee, tea, or a protein shake? Tea. I drink coffee every once in a while, but I don’t drink protein shakes. They don’t sit well with
my stomach.

Kemba Walker
Position: Guard
Age: 24
From: New York
What’s your favorite thing about living in Charlotte? The people around town are always nice. They always show good hospitality.
Where do you take family and friends when they visit you in Charlotte? I take them to Duckworth’s, a restaurant by my house.
What does having the Hornets name on your jersey mean to you this season? There’s a lot of history that has come through this place. With the team bringing the name back and the whole rebranding, it gives us a chance to be a part of the history.
Name one thing about yourself that would surprise people. My favorite hobby is to sleep. Coffee, tea, or a protein shake? Probably tea.

This article appears in the November 2014 issue of Charlotte magazine.
Categories: Quick Reads, The Buzz
Contest of the Month