Peter Fioretti and his brother, Bob, were the first people in 2018 to trek to the North Pole, a dangerous expedition on constantly shifting sheets of ice. The local real estate investor and founder and CEO of Mountain Real Estate Capital chases extreme adventures, but this was his most challenging trip yet. Charlotte sat down with Fioretti one year later (interview has been edited for clarity and length).

Charlotte magazine: Traveling to the North Pole is dangerous and extremely difficult. Why go?

Peter Fioretti: It was so extreme of an adventure; it was something we wanted to do. I think this is only one step behind an adventure to outer space, which I will do one day.

PF: You can’t trek to the North Pole unless you go through an extensive ice training program. What we learned was about all of the potential. I know how to handle the knowns—polar bears, navigating through really rough terrain, recognizing different signs of trouble. Here’s an unknown we didn’t train for: The shovel is a very important tool. You use it to pitch a tent, when you have to build a bathroom, and more. Well, on the first day of our trek, we hit some really tough terrain. We had to climb some really high boulders, and when we started to pitch camp, there was no shovel. The shovel was lost. I can’t tell you how difficult that was. But it was OK. We told ourselves, ‘Stay calm and figure out another plan.’ 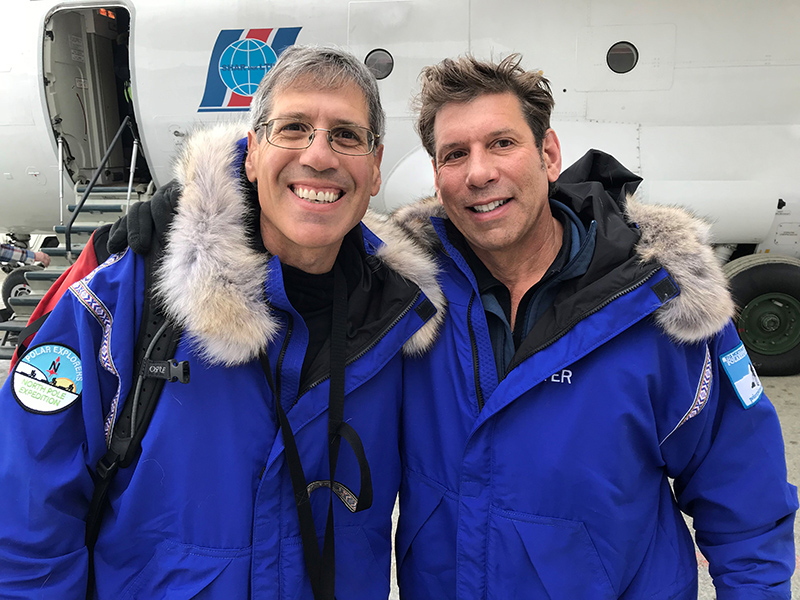 Local real estate investor Peter Fioretti (right) and his brother, Bob, were the first people in 2018 to trek to the North Pole.

CM: How cold does it get?

PF: The Arctic clothing is made to withstand minus 70 degrees. So that sounds good, right? But in reality, unless you’re moving and using your energy, you’re going to be cold. When I hiked Mount Kilimanjaro, there were Sherpas to put up your tent, cook the food, help with any injuries. We asked our guide if we could hire Sherpas for this trip, and they said no. Why? Because you’re going to want to do all those activities. Once you’ve stopped for about seven to 10 minutes, your body starts to freeze.

CM: Did you have any close calls while you were out there?

PF: Yes, yes, yes. We had several. But we had an amazing guide, Eric Lillstrom of Polar Expeditions. We’re all carrying a sled of about 50 to 60 pounds behind each of us. So the best situation would be to find white open ice with maybe a little bit of snow on it. There’s not a lot of that, but when we found it, we took advantage of it. The ice is always moving. We’re on it for about 30 minutes when our guide gives us a signal to stop, saying, ‘Single file, 20 feet apart, don’t have the poles touch the ice.’ Meaning, this is a danger zone, something has gone wrong. When we finally got off the ice, we asked Eric, ‘What was wrong?’ He told us to look over with the binoculars. So we look across the ice and there are two slates of ice colliding.

CM: What do you do if someone falls into the water?

PF: Once we get them out, they strip down naked and roll in the snow to get the moisture off while the other two are pitching the tent. Once you get the moisture off, you jump into your sleeping bag as the others heat up a hot water bottle. Then you’re done for the day.

CM: So obviously this is pretty extreme. Any tips for Charlotteans who want a little adventure close to home?

PF: You can do some amazing hiking and biking. There are so many trails outside of Asheville. I also train at TotalCyclist, which has several locations in Charlotte.

This article appears in the April 2019 issue of Charlotte magazine.
Categories: In Print, The Buzz
Contest of the Month