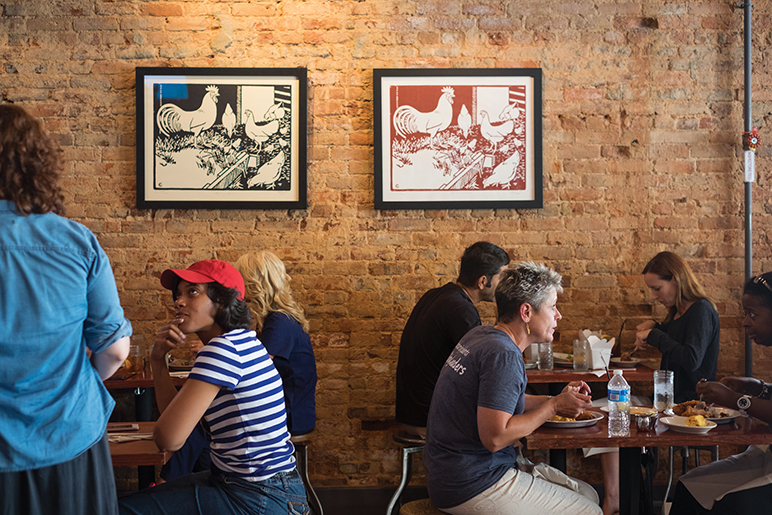 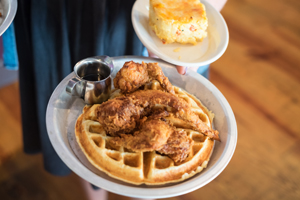 WE'RE ALWAYS judging restaurants. On Twitter and Instagram, we rave or rant about an experience. Chefs can read reviews that we’ve typed while hidden behind our handles on Yelp and Google. But in the food world, there’s one place every chef hopes to be judged: the James Beard Awards.

Raleigh has a James Beard Award-winning chef. Charlotte does not.

We have a lot of great chefs, but we don’t have an Ashley Christensen. Her name is synonymous with Raleigh restaurants—one chef who owns seven concepts in the area. She started earning her city’s admiration when she opened Poole’s Diner in downtown in 2007. By the time she opened Death and Taxes, her latest eatery, this year in a former bank space, she had the love of her city. She was on the Food Network, competed on Iron Chef America, and has appeared in national magazines and The New York Times.

For years, her name has come up in most conversations about restaurants in Raleigh, and that’s hard to ignore for those in charge of judging the Southeast for the most respected food awards in the country. In 2014, she earned a James Beard Award for Best Chef in the Southeast.

Christensen was too busy traveling to speak with us about her town’s food scene and how she won a James Beard Award. I guess that’s what happens when you reach that level of celebrity.

Instead, we spoke with Phil Vettel, a restaurant critic for the Chicago Tribune and Chairman of the James Beard Restaurant and Chef Awards Committee. He explained the rules for the James Beard Awards and what Charlotte chefs can do to win one. First: Follow Christensen’s lead, and make a name for yourself beyond your restaurants.

The voting committee members can vote only on restaurants they’ve personally visited, giving bigger cities and destinations an advantage, he explains. It takes more than just having good food in a city to win an award—it also takes a tourism push centered on food to get diners from across the country into town.

“You would like votes to be purely qualitative exercises, but the fact is you can’t vote for places you haven’t eaten at. And you can’t be at the place unless you really want to go to the place,” he says. “So maybe it starts with people thinking, ‘Wow, this is a great place to visit.’ If Charlotte’s tourism board did some amazing job of just driving visitors to their town, absolutely the restaurants would benefit—both in terms of making real money, which is the object of this exercise, but also in building a reputation. Because you can’t build reputations without people.” — Kristen Wile

Raleigh: Beasley’s Chicken + Honey
Go here if: You like expensive champagne with your honey-fried chicken, which you can order with gussied-up sides such as pimento mac-n-cheese custard.

Winner: Price’s. We may be stereotyped as a town of bankers, but we still like our fried chicken greasy and salty. 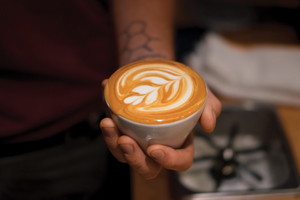 Charlotte:  Not Just Coffee
Go here if: You want great pour-over coffee, brewed just for you.

Raleigh: Joule Coffee & Table
Go here if: You like to be “productive” while working from a coffee shop. Productive at people-watching from the window seating, that is.

Winner: Tie. Both serve Counter Culture coffee out of Durham and make great latte art. Joule has a more hipster vibe than Atherton Market and 7th Street Public Market, though, so if you’re hipster averse, NJC is your winner.

Raleigh: Clyde Cooper’s Barbecue
Go here if: You’d like your unsweet tea served with a “bless your heart.” At least someone understands the sacrifice of taking the sweet out of tea.

Winner: Clyde Cooper’s. The sense of history (the original opened in the 1930s) and the staff’s Southern genteelness keep the vinegar-induced pucker off your face.

Raleigh: Lucettegrace
Go here if: You need a pick-me-up. Bright colors and decadent desserts do the trick.

Winner: Amélie’s. It’s hard to compete with 24-hour service, even if LucetteGrace also has an incredible salted caramel brownie.

Charlotte: The Punch Room
Go here if: You want to feel like you’re a part of the “in” crowd. Mixologist Bob Peters makes everyone feel that way.

Raleigh: Fox Liquor Bar
Go here if: You’re looking for classic cocktails with a modern twist in yet another one of Ashley Christensen’s places. This one is underneath Beasley’s.

Winner: The Punch Room. Why spend time in a basement when you can be on the 15th floor of The Ritz?

Charlotte: Soul
Go here if: You want to make a night out of eating. Pass the time waiting for a table at a nearby bar, then spend hours ordering and eating small plates.

Raleigh: Stanbury
Go here if: You’re looking for Soul, somewhere else. With stuffed birds on the walls and innovative small plates, it’s like Soul’s long-lost sibling.

Winner: Soul. There’s something so good about a place that’s so hard to get into. Here, it’s the food.

Charlotte: Secret Chocolatier
Go here if: You want some of the best chocolate in Charlotte.

Raleigh: Videri Chocolate Factory
Go here if: You want to learn. This bean-to-bar chocolatier has a museum-like display of how chocolate is made, and you can watch the process.

Winner: Videri. We can’t think of a way to bend this in Charlotte’s favor. You can’t compete with bean-to-bar unless you have it. And we don’t.

This article appears in the September 2015 issue of Charlotte magazine.
Categories: By Kristen Wile, In Print
Contest of the Month