Listen to Christie taylor discuss her ideas on how to make Charlotte more curious. 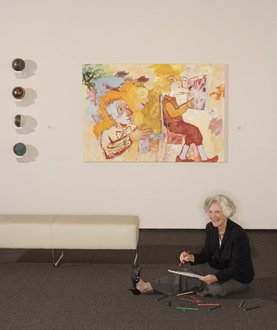 As an undergrad at Queens, Christie Taylor planned to be a painter. A professor told her to give up her dream. She persevered before launching Hodges Taylor gallery in 1980.

Here’s how it would work.

First you need buttons, the kind people can write on and pin to their clothing. Put button stations all over downtown Charlotte, in restaurants, or in kiosks on the street. They need to be where thousands of office workers leaving their cubicles could pick them up.

Next, have people write on the buttons what they wanted to be when they were six years old—"astronaut," "lion tamer," "doctor," "cowgirl."

Then, have everyone pin them on as they head out on Tryon Street.

Here’s where the fun begins.

Think of how your sense of yourself would change if you rediscovered and publicly declared your dream self. Imagine how your view of others might change when you learned theirs. ("Deborah in Human Resources wanted to be a sculptor!") Envision the ensuing conversations, the desire to dig deeper, to learn more.

Finally, think how this newfound curiosity could spark a hunger for fresh experiences and spill over into other areas: building audiences for cultural events, sparking creative dialogue in corporate offices, perhaps even keeping more kids in school. Charlotte might break from gray to rainbow hues by becoming more accepting of the new.

Through just such a chain reaction, CampaignCurious would be off and running.

It is the brainchild of Christie Taylor, managing partner of the Hodges Taylor Gallery uptown. She’s thinking big, not looking for a one-shot event but rather something in its own way as radical as banning khaki pants and golf shirts during the Charlotte summer. She wants to change the city’s mental attitude, its just-the-facts, let’s-make-a-buck mind-set, by making it more free and playful.

Taylor, fifty-seven—lively blue eyes, uncolored gray hair, bubbling with girlish curls—is well placed to make it happen. She’s a rarity in a city that likes to bring everyone into a bear-hugging consensus: an outsider-insider. As someone who’s led arts organizations such as the Light Factory and also won the Business Woman of the Year Award, she’s comfortable in an artist’s studio or a corporate office—and not afraid to challenge in either setting.

"She’s not going to just hang out and not provoke and look for a new way to look at things," says Nancy Dorrier, a management consultant in Charlotte who has worked with Taylor’s gallery.

Episodes such as the 1996 controversy over Charlotte Repertory Theatre’s Angels in America and the perennial fights over public art fire Taylor’s belief that Charlotte needs to be more open. Taylor’s take on Charlotte finds support from Dr. David Goldfield, a historian at UNC-Charlotte. He cites two reasons why Charlotte traditionally has not put a high value on curiosity. One is religion, the regional dominance of an evangelical Protestantism that stresses certitude—even inerrancy—in matters of faith. The other is a century of history from the Civil War, through segregation, and on to the civil rights era that saw an emphasis on strict public conformity on racial issues.

"Attitudes [of curiosity or inquiry] have not been valued or rewarded—quite the opposite," Goldfield says. "They have been squashed, even punished."

Taylor comes at curiosity from a concern for the arts. She points to a 2006 survey by the Arts & Science Council, the community’s cultural umbrella organization, that showed the average Charlotte-area resident goes out to events 5.5 times a year, including movies, pro sports events, church-based performing-arts and youth-school art programs. Take out movies and church/club events and average participation drops to only 3.8 times a year. CampaignCurious, Taylor believes, will get more people in museums and concert halls, but also make life richer for all kinds of people. "I want to get people to think outside their suit," she says.

For her, art — and curiosity — came naturally.

Winston-Salem, where she grew up, supported the arts and encouraged participation. Her parents fostered a sense of play. Her mother played "The Girl from Ipanema" endlessly on the piano. Taylor and her father danced in the kitchen nightly while doing the dishes. "On Halloween, they would dress up in costumes more than the kids," she says of her parents.

As a child, she loved to draw. At family picnics, her aunts would hand her paper plates and ask her to make a picture. When she was eight years old, she won a blue ribbon in school for a drawing, "A Day at the Circus." She was hooked.

Art was her major when she moved to Charlotte in 1970 to attend what was then Queens College. But her business sense began to surface. She ran the Student Union, performing tasks including hiring acts, keeping the books, and taking out the trash. She enjoyed seeing how what she produced made people happy.

Just days before graduation, a professor stunned her by saying, "I really don’t think you should paint again." But the department chairman, whom she was close to, said no, he’s wrong, but you need to go art school.

She did. But first she ran a gallery in Winston-Salem’s Reynolda Village, a small place with lime-green shag carpet on the floor and pegboard on the walls to hold the paintings. She had a show there, landscapes and still lifes, before heading to Philadelphia for a semester at the Pennsylvania Academy of the Fine Arts. There, she did what she couldn’t do in college — draw nudes. At prim Queens in the early 1970s, models had to wear leotards.

As an artist, Taylor says she found that "I didn’t have anything to say." She came back to Charlotte to work at a gallery on East Boulevard and in 1980 joined forces with Dot Hodges. But the love of art she felt as a child still propels her, connecting her to both artists and clients. "I don’t think I’ve gotten off my path at all," she says.

For Taylor, the gallery is a venue for bringing together all kinds of people, one reason she and Hodges have kept their space downtown instead of moving to the suburbs. They see Tryon Street as "the common ground." To get more interaction, Taylor recently scrapped the traditional gallery opening. Instead of hosting the usual mob sipping white wine out of plastic cups and hardly looking at the art, she invites twenty-five people to meet the artist and ask questions.

Hodges Taylor is almost thirty years old. For a fragile business to reach that milestone takes the kind of networking Taylor is good at. "She’s enough of an extrovert [that] she doesn’t mind being on the phone all day," says Dorrier. "She makes friends quickly, she doesn’t see a stranger, and she hangs in there."

When she’s off — away from the gallery or traveling to install art for a corporate client, Taylor enjoys her house on a pond. She lives there with her seventeen-year-old daughter, Ainslie, herself an artist. Taylor still paints, kayaks on the pond, and cares for three rambunctious dogs. (The more polite gallery dog, Ratty, belongs to partner Dot Hodges.) But Taylor is not off often.

Taylor was an unusual choice for Business Woman of the Year, an award given by Wachovia and Queens University of Charlotte that typically goes to an executive at a bank or a nonprofit. As part of the process, she was asked by an interview panel what one thing she would change about Charlotte. "Make it more curious," she replied.

After she got her plaque in 2005, Taylor decided if something was going to happen, she’d have to do it.

While plotting a campaign, she realized the question "What did you want to be when you were six years old?" was crucial. That’s a time in life full of possibilities, before kids are told what they can’t do. She points to the self-portraits Ainslie did as a child: full-frame and frontal, as big as the whole world.

By getting people in touch with six-year-old dreams (she suggests families forget buttons and tape their dream on a sticky note to the refrigerator), Taylor doesn’t intend to make bankers the park rangers they once hoped to be. Rather, she believes as they rediscover and share, they’ll do what artists do — take risks, make themselves vulnerable.

What she’s describing would require a leap — from personal discovery to curiosity to seeking new experiences — and Taylor knows that. She concedes her idea may seem risky, even nonsensical, but it just might bring about transformation.

Taylor brainstormed with downtown power centers including the Foundation for the Carolinas, Center City Partners, and the Arts & Science Council. The feedback seemed to focus on having a day long event in Charlotte. "That’s not what I’m talking about," Taylor says.

Lee Keesler, president and chief executive officer at the ASC, which does an annual fund drive to support many arts groups, suggested she do a proposal. She did, working with graphic designer Mervil Paylor. She foresaw a rollout beginning in 2008 dovetailing with the ASC’s 2009 fund drive, including components such as a speaker’s bureau, Web site, T-shirts, and a Curious Capers Club, a group whose anonymous members would promote spontaneous temporary art happenings.

Keesler decided it didn’t work for the ASC. Timing was an issue, and Keesler says other ASC audience-building efforts, such as CharlotteCultureGuide.com, are paying off. But he respects Taylor and likes the idea. "I agree completely with Christie that as a community there is room for us to be more curious," he says.

Undeterred, Taylor persists, trying to do one thing related to CampaignCurious each week. She has spoken to groups such as the Rotary Club, using slides of her daughter’s artwork, and donated crayons and drawing paper to Crisis Assistance Ministry for the kids accompanying their parents. What keeps her going is the sense of personal discovery she sees when she talks with people about their dreams as six-year-olds.

"I have had ah-ha moments with people and I can watch their faces and see the change," she says. As students milled about after a talk with Athena’s Path, a group for middle school girls, a woman banker sidled up to her and confided, "I’m still a ballerina."

Says Taylor, "I haven’t given up."

For the April issue, Richard Maschal reviewed uptown’s newest architecture. He spent forty years with the Charlotte Observer, the last ten as an arts and architecture writer.

This article appears in the June 2009 issue of Charlotte magazine.
Categories: People
Contest of the Month