While the corporate glass ceiling is close to shattered, the stained glass ceiling has taken longer to crack. Finally, though, it’s not uncommon to see a woman wearing a robe at church these days, and we don’t mean choir robes. We spoke with seven of Charlotte’s female religious leaders to find out what they’re doing behind and beyond the pulpit 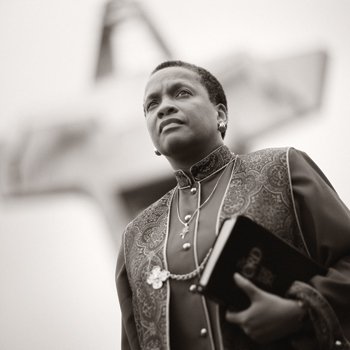 Although Joan Parrott, fifty-three, has preached in places as far away as Switzerland, she knows that ministry is more than sermons.

"I believe in servant leadership. I'm not the kind of minister that thinks that when you're a minister you're over people and you're a dictator and you tell them what to do," says Parrott, who became executive minister of University Park Baptist Church in March 2006. "You find ways to serve people and lead them to Christ Jesus. For me the most powerful thing about being called to the ministry is to lead souls to Christ and see their lives change."
As coordinator of the 11,000-member church's more than eighty ministries, Parrott believes in breaking down walls. "Our ministries [come from] needs in the church and needs in the community, so we really are trying to just be a very relevant church," says Parrott, who participated in Mecklenburg Ministries' Souls of White Folks program, which looked for ways to develop interracial trust in the community.

"It's good just to get out," she says. "When you stay in amongst yourselves you don't have that cross fertilization of thinking that you sometimes need or that sensitivity that you need, particularly when you're dealing with black and white issues."

More Women of the Word

This article appears in the December 2007 issue of Charlotte magazine.
Contest of the Month