Bringing this stately home back to life requires restoration, not renovation 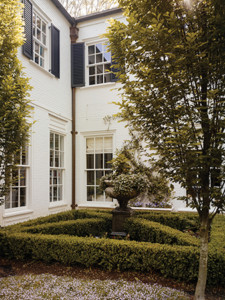 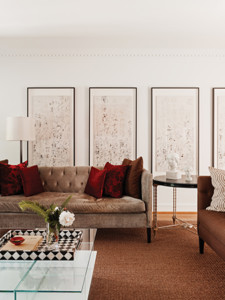 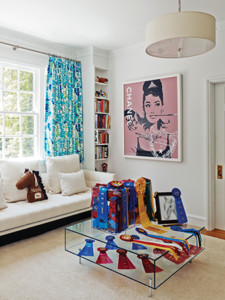 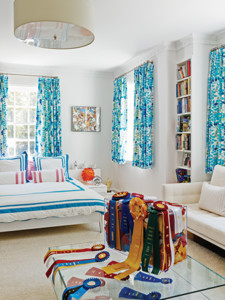 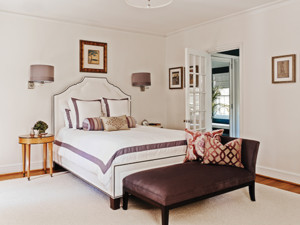 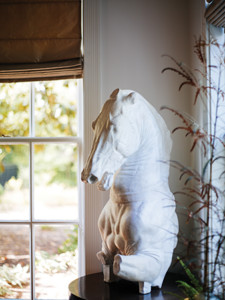 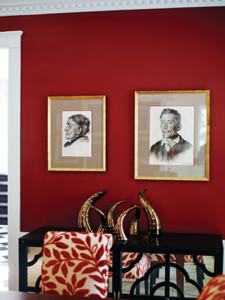 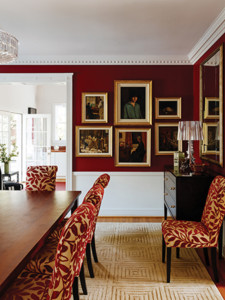 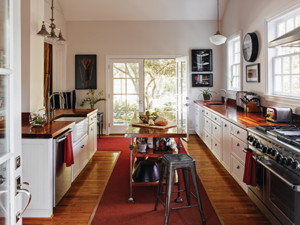 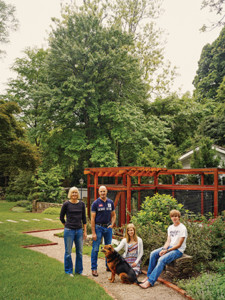 The first time Hugh Wrigley and Diana Crawford saw the postwar Colonial home in Country Club Heights, it was in a state of extreme disrepair: The ceilings sagged, water pooled on the floors, and mold covered the walls. But there was something about the home that appealed to the couple—and it wasn’t the development potential.

Crawford shudders when recounting the neighbors’ worries that the couple would demolish the home, which had been vacant for four years, and subdivide the one-and-a-half-acre lot for development.

“The character of the house was the most important thing for us,” recalls Crawford. “We didn’t want to make huge changes to the house; we wanted to put it back together.”

After purchasing it in 2010, Wrigley and Crawford embarked on an 18-month project to restore the 4,100-square-foot home.

Built for renowned local homebuilder John Crosland, the house was designed to mimic the architecture of the clubhouse at the historic Charlotte Country Club, which sits on the same block. Instead of renovating the 1951 home to reflect current design trends, the couple opted to retain the original floor plan and architectural details, including plaster walls and moldings and hardwood floors, even if it meant forgoing modern amenities like an open floor plan and walk-in closets. Crawford notes that the most modern features of the house, which include upgrades to the plumbing, electrical, and HVAC systems, are hidden behind the walls.

“We wanted to keep everything as original as possible,” she says. “If we wanted everything to be brand new, we would have built a new house.”

Retaining the original character required a significant commitment. The pair hired experienced craftsmen to replicate the moldings and replace or repair the plaster walls. Even the smallest changes to the floor plan—removing a wall to expand the narrow kitchen and adding a door to the dining room—were made with the intent of mimicking original details.

The most significant changes were made in the kitchen. The original boiler room was relocated to expand the space, outdated cabinets and appliances were replaced, and a vaulted ceiling was added to create volume and architectural interest. Crawford opted to forgo upper cabinets to help the long, narrow space feel more expansive. For better flow, a small wall between the kitchen and dining room was removed. The highlight of the formal dining room—and one of the most notable elements of the interior design throughout the house—is the eclectic collection of artwork.

The couple’s taste ranges from modern art to more traditional works as well as meaningful pieces collected during their travels. In the dining room, paintings depicting protests in Egypt’s Tahrir Square purchased during a recent trip to Istanbul hang alongside artifacts from their native Australia and a collection of oil portraits painted by a family member. Elsewhere in the house, a marble bust of a horse, colorful Japanese artwork, and a photo of tattooed singer/songwriter Amy Winehouse round out the collection.

One of the biggest challenges of the restoration project was carving out room for the entire family. Crawford explains that the home “was built for entertaining,” with little emphasis on private spaces.

On the second floor, the previous owners had his-and-hers bedroom suites on opposite ends of the house, along with a small guest room off the main hall. To expand the space for their two teenagers, a new bedroom and bathroom were added and the original guest room was turned into a space for the kids to watch movies and play video games.

All of the bedrooms overlook the picturesque backyard.

“The yard was so totally overgrown when we bought the house that we had no idea where the property line was,” Crawford says.

The couple was surprised to unearth a 19th Century carriage house in the back corner of the yard that was remodeled into a charming guesthouse with its own cottage garden.

Adjacent to the carriage house, an enclosed vegetable garden features a latched door and metal grid panels to keep critters out and give beans and cucumber vines space to climb.

Just like the interior of the house, the backyard was designed to marry the existing landscaping with new plantings. The original mature trees create a beautiful canopy over the yard while new garden beds and hedges create the illusion of outdoor rooms. French doors from the sunroom lead to a slate patio covered with a pergola, and the new swimming pool looks like an original outdoor fixture.

Once the restoration and landscaping projects were complete, Wrigley and Crawford hosted an “end of construction” party.

“A lot of our neighbors were very curious about what we were doing here,” Crawford explains.

One of their guests was the daughter of the previous owner who grew up in the home. After touring the house, she paid the couple the ultimate compliment.

“She said that it looked almost exactly as she remembered it,” recalls Crawford. “It meant a lot to us. This house is where we were meant to be.”