Grits are served often at greasy-spoon joints with a pat of butter. But they also dot the menus of nationally acclaimed restaurants. Here’s where to find the simple and the elegant. 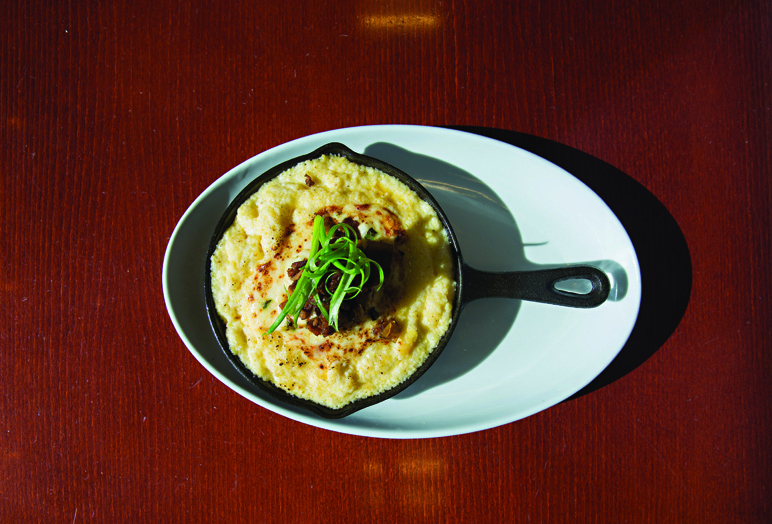 Above: The Flipside Cafe’s Carolina grits with pimento cheese and bacon jam. 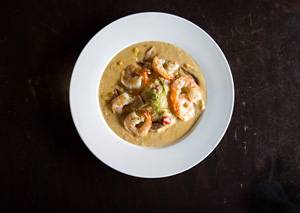 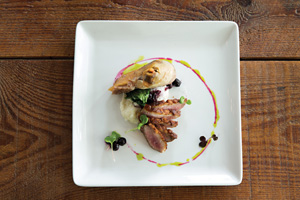 From top: Savor Cafe and Catering’s shrimp and grits; The Summit Room’s duck with blueberry grits..

The Flipside Cafe
What: Carolina Grits with Pimento Cheese and Bacon Jam
Co-owner Amy Fortes’ pimento cheese shows up on several dishes across the restaurant’s breakfast, lunch, dinner, and brunch menus. The Carolina grits do, too. But when the two meet on a plate listed in the “small bites” category, there’s nothing small about the flavor. Executive Chef Joseph Cornett prepares the Anson Mills grits by bringing water to a boil and adding a pound of butter. He slowly whisks in the grits and adds Parmesan and sharp cheddar, then finishes them off with a quart of cream, salt, and pepper. 3150 Highway 21 N., Fort Mill, S.C., 803-802-1711

Bistro La Bon
What: Asiago Cheese Grits
Bistro La Bon on Central Avenue offers brunch on Saturday and Sunday. There, you’ll find coarse-ground Asiago cheese grits that are dense and hearty. They’re available a la carte on Saturdays (Hint: You can sub them for the potato cake) and on the brunch buffet on Sundays. The toothsome grits are an ideal contrast to the light and fluffy omelets, which are served on Saturdays. 1322 Central Ave., 704-333-4646

Savor Cafe and Catering
What: Shrimp and Grits
This version of the Lowcountry classic is owner and Charleston, South Carolina, native Lori Pearson’s family recipe. The homemade shrimp stock adds extra flavor to the andouille sausage gravy. The smoky mixture, filled with colorful bell peppers and chunks of sausage, pools around a mound of coarse-ground grits. The yellow grits, flavored with butter, cream, Tabasco, and cheese, come from Linney’s Mill in Union Grove. The plate arrives with five plump shrimp and an extra-large spoon. 1404 W. Morehead St., 704-334-0098

Eddie’s Place
What: A Side of Grits
At this Cotswold neighborhood spot, grits pour out of the kitchen all day. They arrive on breakfast-anytime platters, as a side to scrambled eggs or omelets. But they also cozy up to racks of ribs and burgers. Eddie’s offers plain, cheddar, and Parmesan varieties. The signature Parmesan grits begin with a base of onion, garlic, thyme, and basil. White wine, butter, chicken stock, heavy cream, salt, pepper, cayenne, and grated Parmesan round out the bold side dish that customers order from open to close. 617 S. Sharon Amity Rd., 704- 442-0147

The Summit Room
What: Duck with Blueberry Grits
When this Dilworth dinner-only restaurant reworked its menu this past spring, the duck was the only entrée that remained untouched. The grits from Old Mill of Guilford provide a creamy base for confit duck leg and seared duck breast. The tang of the blueberries, pickled in-house, complements the duck’s rich flavor. For the full effect, get a bit of duck, grits, blueberries, and wilted spinach in one bite. 1531 East Blvd., 980-237-2227

This article appears in the September 2015 issue of Charlotte magazine.
Categories: Food + Drink, In Print
Contest of the Month