The final cookoffs in the #GotToBeNC Competition Dining Series took place this week, crowning a champion chef in each bracket of the contest. The first went to Chef Joseph Cornett of The Flipside Café, who had chefs/owners of Flipside Jon and Amy Fortes cooking alongside him. The victory stretched Chef Jon Fortes' winning streak to three years; he won the last two years with Mimosa Grill, and went on to win the statewide contest last year.

Chef Brent Martin of The Summit Room, on the other hand, lost his only battle in last year's competition, and appears to have learned a lot in that effort, winning contests against Bank of America Stadium, Dogwood, and Local Dish to earn the title of champion.

Each of the champion chefs gets $2,000, a red winners' chef jacket, and a chef's knife made by Charlotte's own Ironman Knives. The contest heads to Winston-Salem next, and Competition Dining Series finals will take place in October. Here's how the last two battles went down: 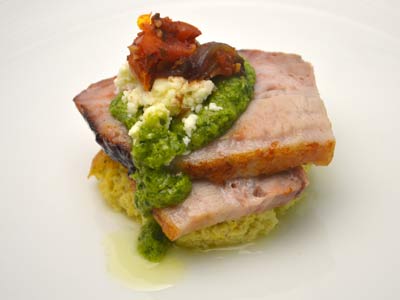