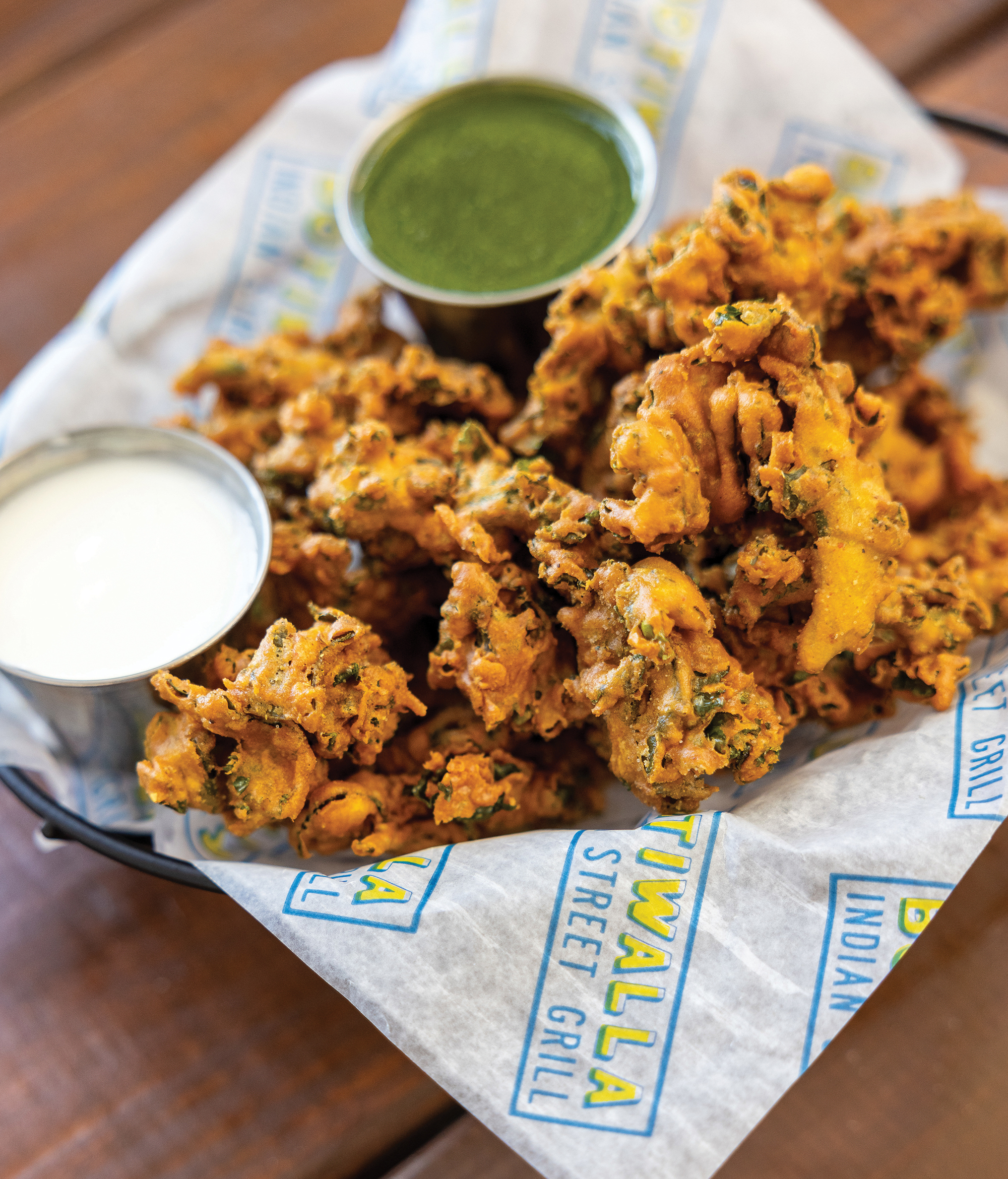 “Botiwalla” is Hindi for “the meat guy,” a reflection of what Irani says was one of two main inspirations. The first is his attachment to late-night street food, a thriving tradition in Indian cities like Mumbai and his hometown of Ahmednagar, in western India. After the formal restaurants close for the night, he says on the Botiwalla website, “the grills come out, the fires get lit, and late-night revelers and commuters get fed.” 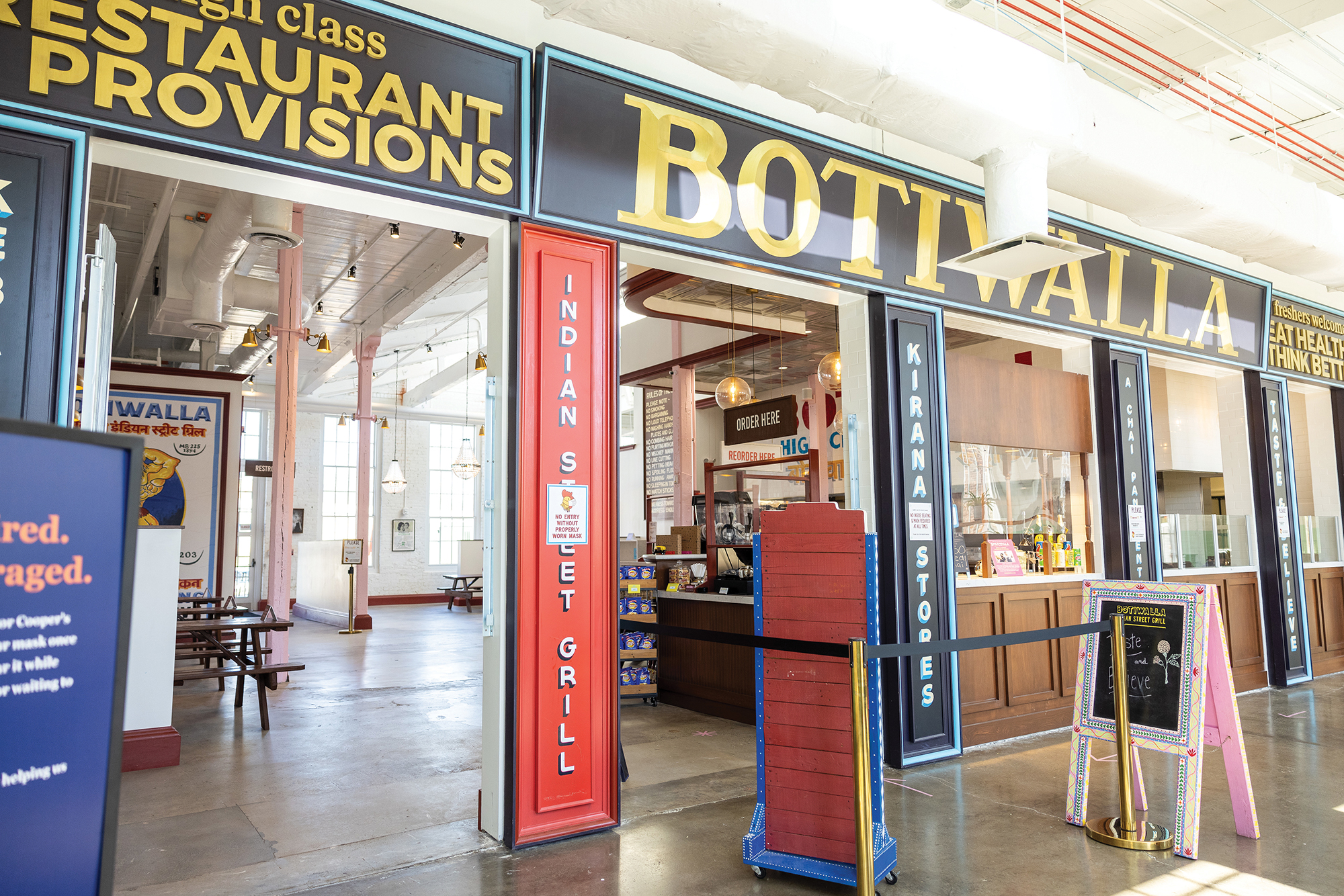 The décor in Botiwalla’s dining room at Optimist Hall is a nod to the tea and kebab houses in India. Photos by Peter Taylor. 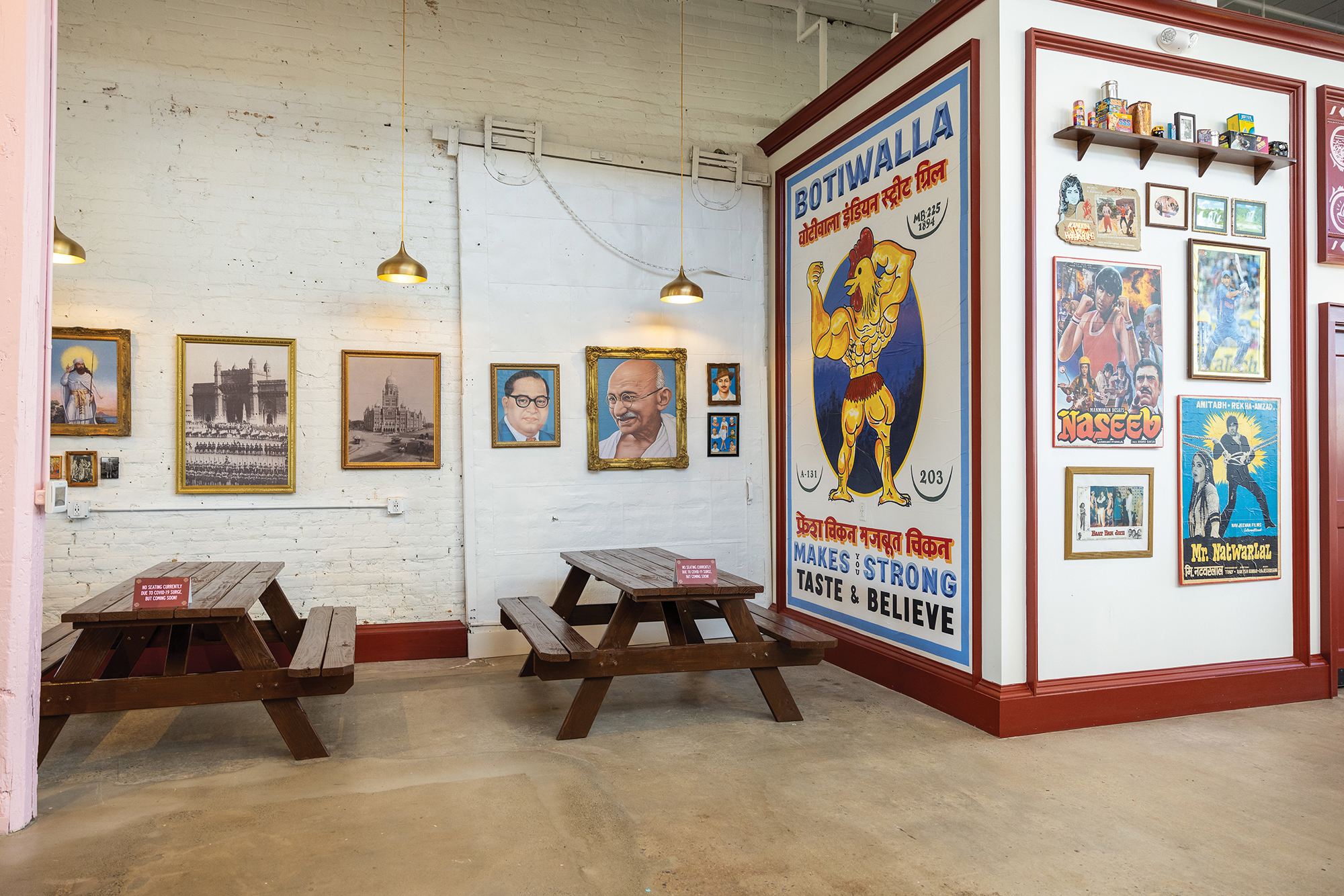 The second: the tea and kebab houses in Maharashtra, his home state, establishments originally designed to cater to Victorian-era English colonialists and their passion for high tea and propriety. At the entrance, you’ll find a “provisions corner” stocked with bottled sodas, spices, biscuits, and sauces. The dining area has glass chandeliers, Bollywood posters, and blue and brown wooden picnic tables with a view of the open kitchen. (At press time, the restaurant wasn’t yet open for dine-in service, so guests ordered at the counter or online and either took their meals to go or grabbed tables in the communal food hall.)

The first part of the menu is chaat, snacks you eat with your hands. Start with the SPDP ($5.99), crispy flour puffs stuffed with potatoes, cilantro, and onions and drizzled with sweet and savory chutneys. The Kale Pakoras ($8.99) are kale fritters made with a curried chickpea batter and served with green chutney and sweet yogurt. They taste more like salty potato chips than a green vegetable, so it’s perfectly reasonable to polish off the whole order. 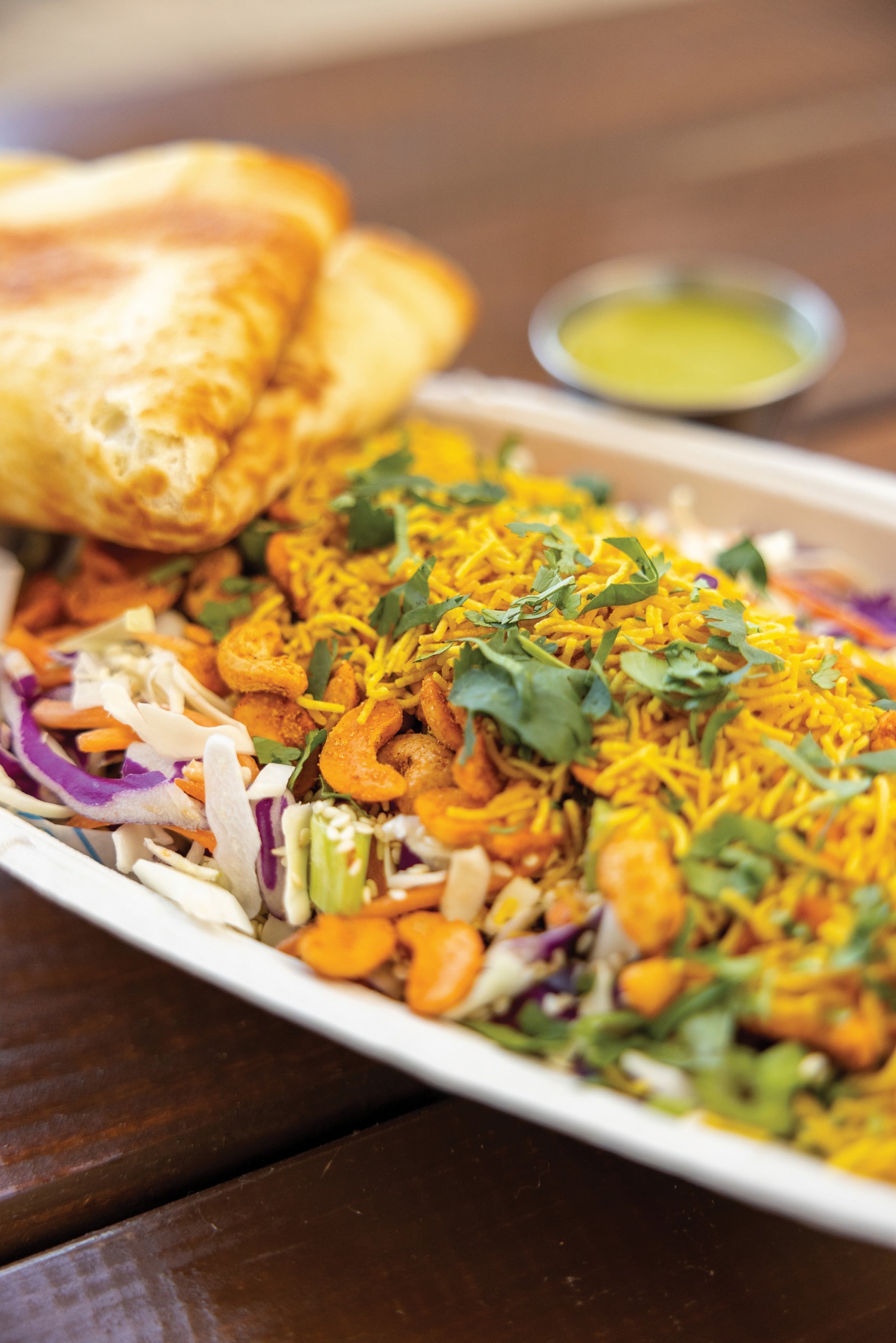 The Desi Salad, topped with carrots, scallions, and roasted cashews, and a side of warm, buttered naan. Photo by Peter Taylor.

The sigri section is where you find the grilled chicken, lamb, and paneer (Indian farmer’s cheese) you smelled down the hall. If you’re new to Indian food, or you just love the Kashmiri spices in a classic chicken tikka masala, get the Chicken Tikka Roll ($9.99). Wrapped in warm, buttered naan and topped with red cabbage slaw and mint chutney, it makes a great grab-and-go lunch.

The Botiwalla Lamb Burgers ($10.99) are a savory pair of ground lamb sliders topped with slaw, green chutney, and Maggi ketchup (which is like a spicier, tangier version of the Heinz variety). You’ll get hints of cumin, ginger, chilies, mint, cilantro, and a burst of heat. And vegetarians needn’t worry: Botiwalla also offers options like the Desi Salad ($7.99), a heap of shredded cabbage, carrots, scallions, and roasted cashews topped with cilantro and crunchy chickpea noodles. (You can add a protein for an additional charge.) The Tandoori Veggie Roll ($8.49) is a hearty mix of grilled zucchini, onions, mushrooms, and bell peppers marinated in yogurt, lime juice, and Kashmiri chili paste, and wrapped in warm, buttered naan. 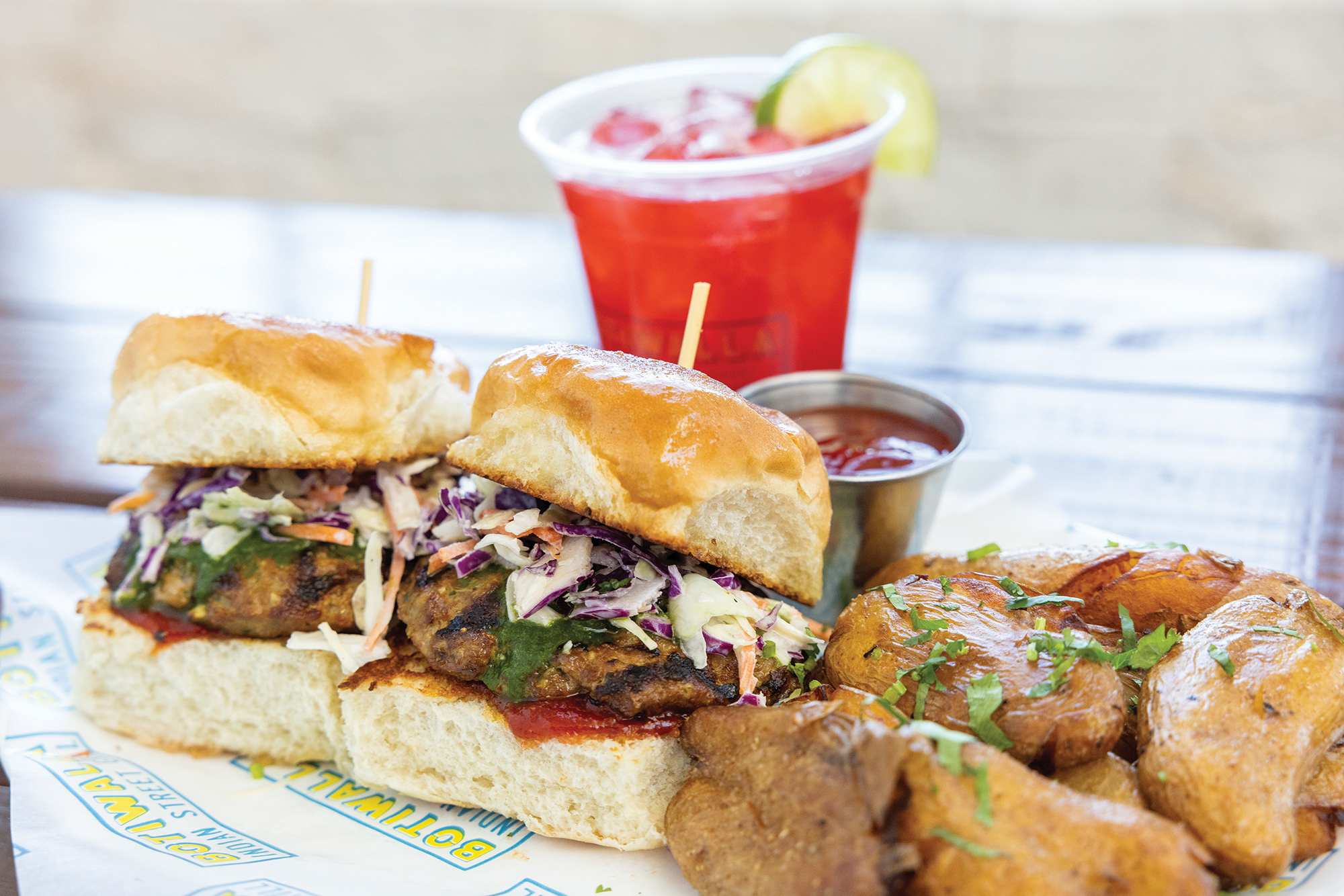 (Above) The Botiwalla Lamb Burgers with a side of Masala Smashed Potatoes tossed with salt, chaat masala, lime juice, and cilantro. (Below) An order of SPDP includes five puffed flour crisps stuffed with potatoes, cilantro, and onions and topped with sweet yogurt and crunchy chickpea noodles.  Photos by Peter Taylor. 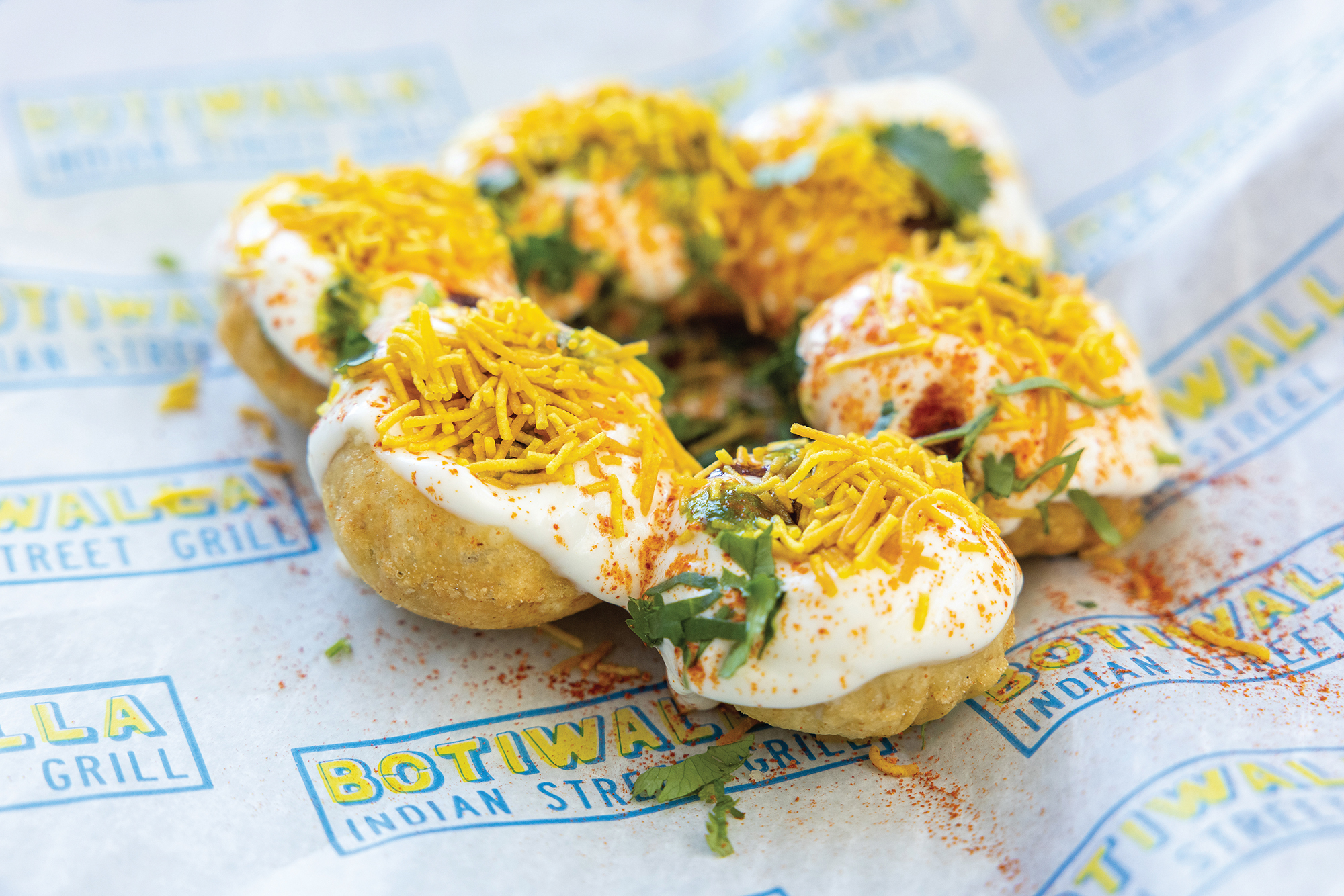 For condiments, an Indian specialty, see the “extras” menu. Order Botiwalla Hot Sauce ($.50) to punch up your burgers, or cut the heat with Raita ($.50), a lightly seasoned yogurt with a touch of sugar. And for a paltry $1.99, you can order an extra serving of—yes—warm, buttered naan.

To top off your meal with something sweet, try the Mango Lassi ($4.99), a chilled yogurt drink with sweet mango and cardamom. For something hot, try the traditional Indian chai tea ($3.49). Botiwalla also serves homemade sodas like Tamarind Cola ($3.99), Pineapple Turmeric Soda ($3.99), and Lime Ricky ($3.99), which are great to douse the fire that the spices may have ignited in your mouth. 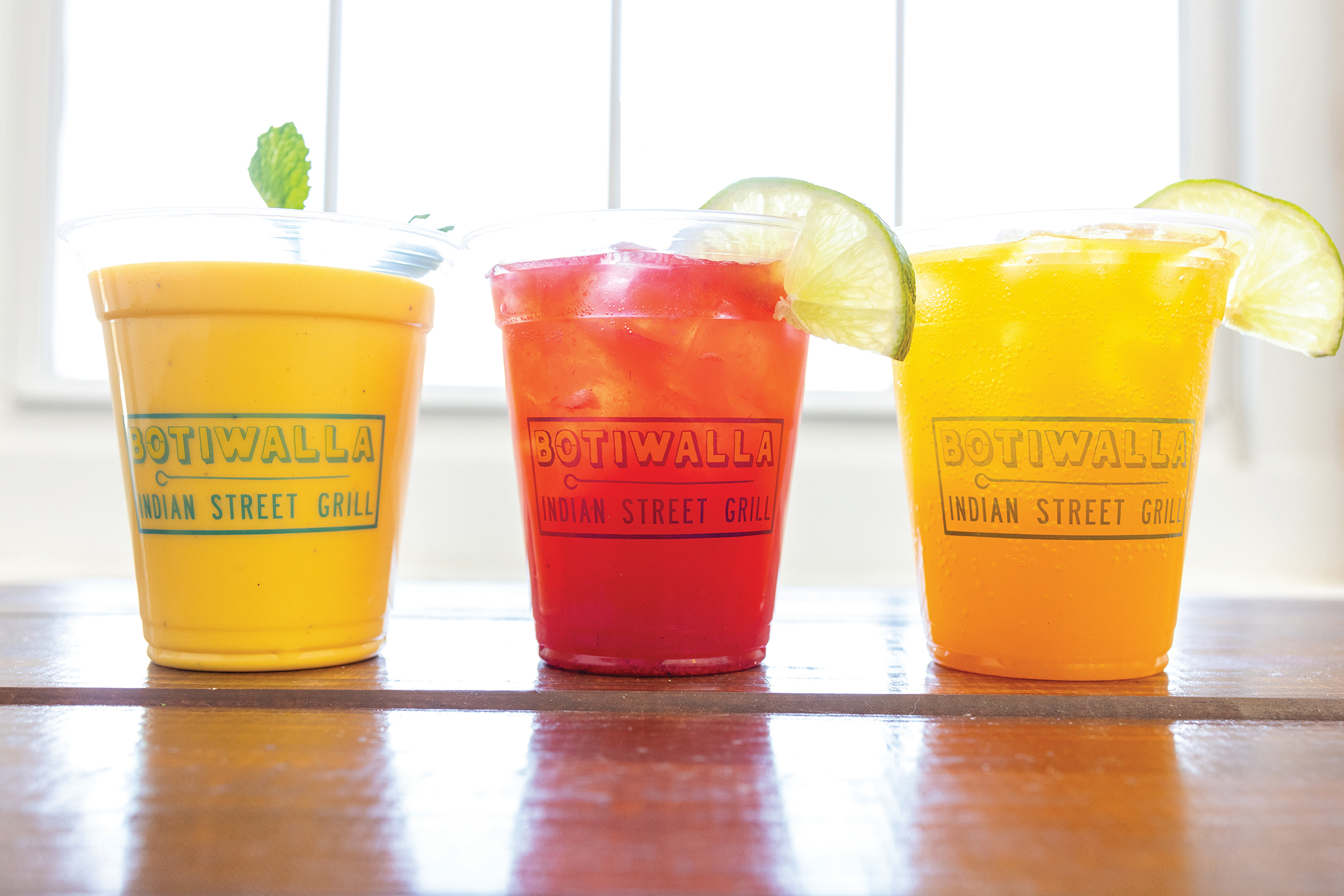 Beverages include the Mango Lassi and homemade sodas like the Lime Ricky and Pineapple Turmeric soda. Photo by Peter Taylor.

As adventurous as its food is, Botiwalla is neither pretentious nor expensive: The kitchen serves everything on disposable plates, and nothing costs more than $12. Come for lunch, dinner, or a spicy nighttime snack, and feel free to skip the utensils. Just don’t skip the homemade sodas or the warm, buttered … you know.

Don’t leave without trying: The Kale Pakoras ($8.99), a mound of crunchy, salty kale fritters that are way too delicious to be a vegetable.

This article appears in the May 2021 issue of Charlotte magazine.
Categories: Food + Drink, The Buzz