When my husband decided to sell his iconic guitar, we ended up with more than we bargained for 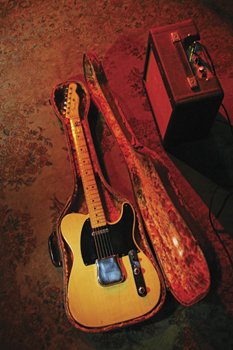 The author’s husband bought this 1952 Fender Telecaster in a pawnshop for $75. – Photo by Chris Edwards

This time last year, I was with a celebrity. It was the only time in my life that I've felt famous, although it was due entirely to a guitar. My husband and I were at the Dallas International Guitar Festival to sell Phil's 1952 Fender Telecaster, an icon of American rock-and-roll. Almost four decades earlier, when Phil was a college student, he found the guitar while rummaging through cases in the back of a pawnshop. He was looking for a lighter guitar, something used, because his new Les Paul guitar was so heavy it was hard on the shoulder for long stretches. He put down $75 for the Telecaster. It was light, it had a bite and a growl to its sound, and it was beautiful.

The Tele (pronounced like Kelly) was somewhat small, with a blond body and amber neck of maple. The patina of the wood glowed, giving it a golden radiance. It was shaped with a smooth round bottom, curved in at the waist, with one rounded shoulder and the other pulled to a tip, like a woman's one-shouldered dress. A partial black plate, called a blackguard, protected the wood from repeated strumming by the right hand. A curved metal box imitating the body's shape was just below the strings. Dubbed an ashtray, it hid the electric pickups that transmitted the sound. The original thermometer-bulb case of brown fabric was a little worn. Inside, the guitar was nestled in orange crushed velvet; the instrument itself was pristine.

Phil loved the guitar, but he wanted to invest in a small-business idea. He already had a line of T-shirts he'd been selling for years through a family-owned Italian grocery in Myers Park. Selling the Telecaster would help him take the business further.

He began scouting the Internet for information on the guitar, and he stumbled across tdpri.com, a forum for guitar lovers; the acronym stands for Telecaster Discussion Page Reissue. He was in shock—here was a worldwide community discussing Telecasters. He posted his first question, about "Eddie," a name he saw written in pencil on the body of the guitar where the neck attached. Phil found it when he took the guitar apart. Men working in the Fender woodshop in California would sign their names to the pieces they built.

A guy in California wrote back, "Prolly Eddie Miller," using "prolly" for "probably." This quirky dialect would become familiar as the months passed; it was a style of writing used by "Ole Fuzzy," an expert in the community. A former stage performer, he had dedicated his life to the appreciation and collection of vintage Telecasters. Known as the Doctor of Teleocity, Ole Fuzzy kept his collection in a building behind his house, the Tele-Shack. He and Phil went from posts to personal e-mails, and then, finally, to phone calls, Phil often talking late into the night because of Pacific Standard Time.

Ole Fuzzy would make peculiar requests. "Measure the distance between the dots on the eleventh fret," was one. Phil would tell him to hold on while he measured, and then would come back to the phone with an answer. "Oh, that's good—that's very good," the guru would reply. Every answer Phil gave, from the types of screws in the blackguard to the distance between the "d" in the Fender decal to the tuning knob, resulted in a gentle exclamation of approval from Ole Fuzzy.

"This guy is like a forensic detective," Phil told me. "He has knowledge down to the micrometer.

The next step in his search was to get a guitar expert to examine it. By the time Phil boarded a plane for Nashville in August 2006, taking the guitar as a carry-on ("You're going to do what?" I asked, mortified. "Just stuff it into an overhead compartment?"), he knew he had something of value. He was going to see George Gruhn of Gruhn Guitars. "When you get there," Ole Fuzzy counseled, "don't let that guitar out of your sight. They're going to want you to leave it with them. Don't do it."

Phil walked through Gruhn's door on Fourth Avenue, into a showroom of scores of vintage guitars hanging from racks. Sure enough, a staff member told him to wait downstairs while he took the guitar up to an office to be inspected. "I've got to go with it," Phil said. The guy was defensive.
"We do this all the time," he countered. "Nothing is going to happen up there."

The man led him upstairs, and in the hallway they ran into Gruhn. He took Phil back to his office, where Phil noticed a long, low glass cabinet behind the desk. There was a moment of delay before he located a thick snake behind the glass. There were glass cages of snakes all around him. It gave him the creeps.

He was taken to a small room, dark, where the guitar was taken apart and examined under a black light. After the autopsy, Gruhn questioned an aspect of the guitar's authenticity. Maybe the neck had been oversprayed? He wasn't sure. He wrote the appraisal: $55,000.

That was August, and throughout the fall, then into winter, Phil contacted—and was contacted by—buyers in the U.S., England, and Spain. Interest waxed and waned, prices rose and fell. By April of last year, we still had the guitar.

"Let's go to Dallas," he said one day. A contact in Kansas had advised Phil to go to the Dallas International Guitar Festival, coming up that weekend. "It's the first and the biggest, the granddaddy of all guitar shows," he explained. Phil wanted to talk to Spanish collector and author Nacho Baños, who had written The Blackguard, a coffee-table-style history of the Telecaster's early years. He also hoped to meet Jay Rosen, a highly regarded California dealer of vintage guitars. Both would be there.

On Saturday morning, we entered the front door of the 1960s Dallas Market Hall, an old convention center with aisles of dealers. As soon as Phil walked in, a commotion began.

"What's in the case?" men started asking, circling us, walking behind us, falling in step. We were two clean-cut, fifty-something baby boomers who had tumbled into a pool of tattoos, long hair, gray ponytails, soft cleavage, and flashy belt buckles. Dealers had pockets stuffed with cash; transactions were unfolding by the tens of thousands of dollars. In this crowd, the Telecaster was a spectacle; everyone seemed hungry. Over the next three hours, which passed like a few minutes, we never walked more than a few steps before we were stopped again. Dealers and musicians alike—some famous, like Lyle Workman, composer of the soundtrack for Superbad and The 40-Year-Old Virgin—wanted to see Phil's prize. It was electrifying.

Sometime after we had arrived, after one New Hampshire dealer had offered $50,000 in cash, a small, unassuming guy wearing a baseball cap walked up to Phil. He looked like Bob Dylan's cousin. "What's in that case?" he asked. Phil asked him if he was a serious buyer, and the man raised his hand and swept it through the air. Our eyes followed the gesture to a long booth. In the middle was a sign: Jay Rosen.
"Are you Jay Rosen?" Phil asked, surprised.

"I've been looking for you," Phil said. A few steps away was Nacho Baños, handsome and elegant, a striking contrast to the hard-edged rockers.
The men took out the guitar, holding it, studying it, delighted by it. "This guitar's original," they said, marveling. Phil asked about overspray. "No, there's no overspray here."

"May I play it?" Baños asked. Going to a chair in the booth, he plugged the guitar into an amp, sat down, and within moments a crowd had gathered to listen to the firestorm. Standing among the onlookers or, rather, towering over them, was a clean-cut, burly Texan in khaki shorts and a white polo. A retired NFL player in his forties, he was accompanied by an Austin music dealer. "Buy that guitar," his friend counseled. "You've got to get that guitar!"

He walked up to Phil. The first words out of his mouth were, "Sir, I'd like to buy your guitar." He introduced himself, and then asked, "What would you take for it?"

"Fifty-two thousand," Phil answered. That morning, he had decided on the price. The guitar was born in 1952, so the price would be fifty-two. "It's appraised at fifty-five."

"Would you take anything less?" the man asked. His short blond hair and All-American looks were rustic yet honest.

"No," Phil answered. "I've already had an offer that is close. The price is fifty-two."

We got into his Cadillac pickup truck, and he began to search for a bank using his OnStar system. He wasn't from Dallas and didn't know the area, and we needed one that was open on a Saturday. We found one that closed at 2 p.m. At 1:55 we walked in. Fifteen minutes later, we were holding a check for $52,000. The Telecaster was his.

Back at the hall, we walked through some of the exhibits and began to unwind. Soon, we were on our way to the airport.

Sitting in the plane as it prepared for takeoff, we didn't say much. We felt relieved. An emotional change was underway. There was no going back now; in selling the guitar, Phil had severed a tie to the past that was hard to explain. The future suddenly seemed closer, and the past, already more distant. Maybe this wasn't about what we had thought—selling one investment to get funds for another. Maybe it was about something bigger.

Maybe it was about hope.

This article appears in the April 2008 issue of Charlotte magazine.
Categories: Life Lines, Opinion, The Buzz
Contest of the Month