Inside a 1920s Gastonia Mansion

Jessica and Alex Churchill preserve the grandeur of the era 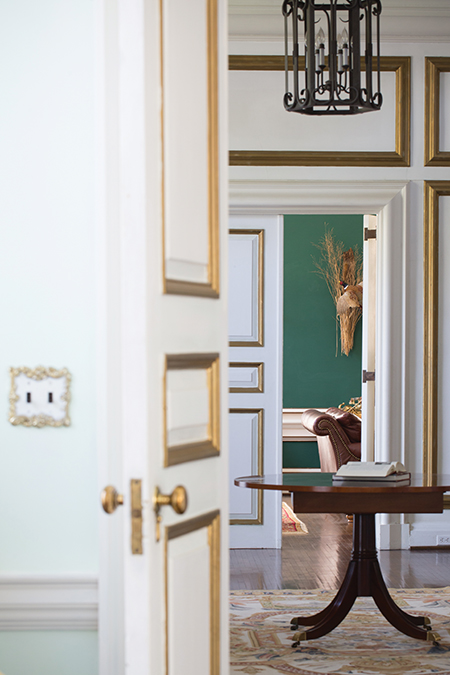 AS A MEMBER of a religious and ethnic minority in a Southern town, Robert Goldberg, a Jewish man, knew discrimination. His family began immigrating to America from Latvia at the turn of the century and had done well buying textile mills. But despite their wealth, they were socially ostracized by some. Congress passed an immigration act making it difficult for additional friends and family to come to America. Universities set quotas on Jewish students. They were barred from the country club, and their community was so small, they had nowhere to worship.

Robert Goldberg outwitted this prejudice by hiring one of the best architects in the South to build a mansion big enough for parties, meetings, and even worship services. The rabbi, after all, didn’t mind conducting a service in a home. He’d been circulating for years. Sometimes, the faithful met in stores.

When the house was finished in 1924, it was grand—a stunning brick mansion with stucco ornament, Palladian windows, and even a pool. It’s so stately that it looks like it’s always been there. When friends push open the massive front doors, they gasp. The foyer is big enough for a hundred people. The curving staircase draws the eye up to a second-floor balcony and fancy, barrel-vaulted ceilings. Chandeliers sparkle and floors gleam.

“From our understanding, because they were Jewish, they couldn’t get into the club, and so they built this to really be a social gathering place,” Jessica Churchill says. She and her husband, Alex, bought the Gastonia house 10 years ago. Designed by Atlanta architect Neel Reid, it was the only single-family Reid home outside of Georgia. “It’s got a ballroom; it has the first in-ground, lighted pool in North Carolina; it had electric outlets in the sunken patio outside for the band,” Jessica says. “It was built to be grand, but a welcoming place.” 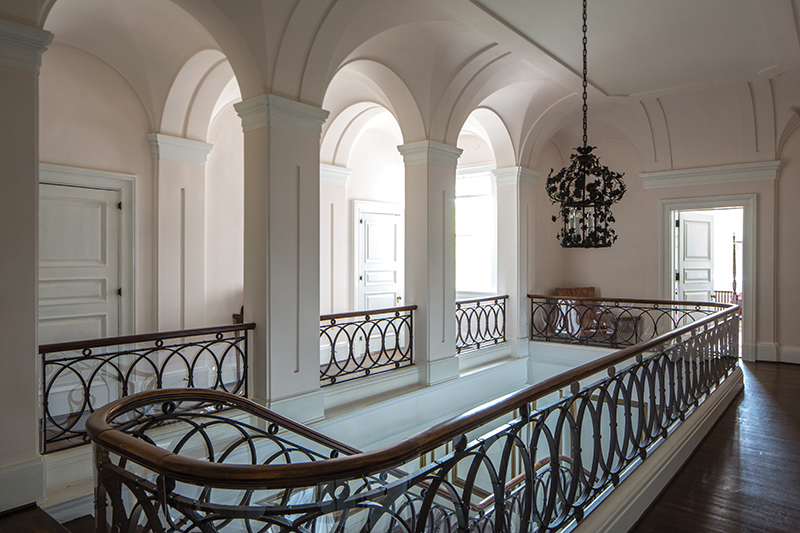 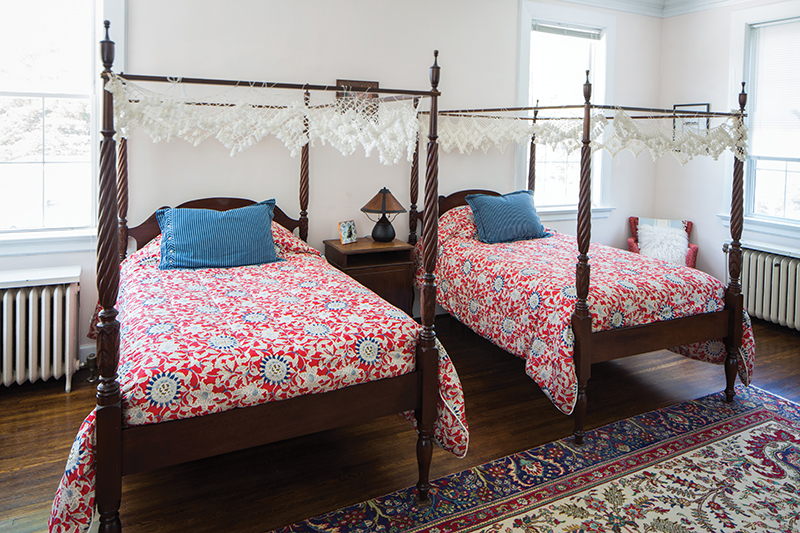 (Above) To keep the beautiful staircase child-proof, the Churchills added acrylic panels behind the iron work. (Below) Antique furnishings feel natural in the 1920s home.

Although the Churchills appreciate classic architecture, they didn’t have a 7,200-square-foot mansion in mind when they were looking for a home. Transferring to Charlotte for jobs in 2007, they began searching areas such as Dilworth and Eastover. But at the height of the real estate bubble, they were unable to find the kind of older home they had in mind. Widening their search, they found the Gastonia house. It was freshly painted and nicely appointed—the previous owners had spent years renovating it—and it was a 30-minute commute to Charlotte. It had soaring, 13-foot ceilings on the first floor, plaster walls, a built-in telephone system, fireplaces, and solid wood doors 10 feet high. The couple decided to buy it.

Old houses, however, are difficult to repair and maintain. Original materials are no longer available, and construction techniques have changed significantly. Alex, whose undergraduate degree is in engineering, has been undaunted by the challenges. He grew up in a house nearly the same age, and likes solving problems. He and Jessica are now in their mid-40s with eight-year-old twins, and the last decade has been an adventure. They laugh, speak quickly of things they’ve learned, and are comfortable in their role as detectives. 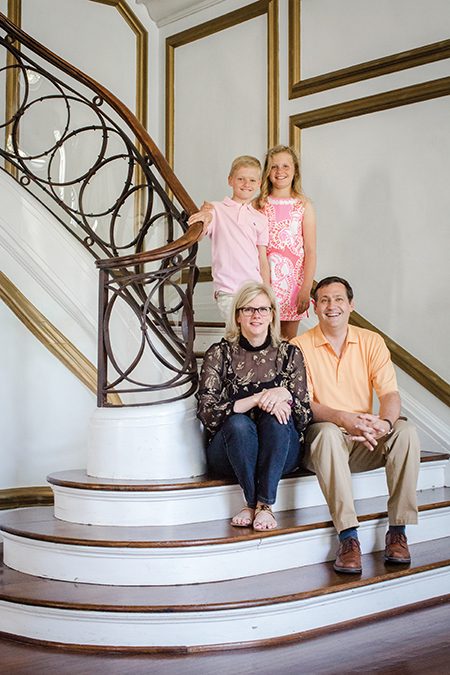 The Churchills may live here now, but their home is known as the Goldberg House or Gurney House.

Alex pushes open a massive door off the foyer, gesturing down a short flight of stairs. “We’re replumbing the bathroom,” he says. The silvery wallpaper on the sloping ceiling looks original; the white porcelain toilet and sink are in the bathroom at the foot of the stairs. The company that made them was top-of-the-line in its day, proving that even when it came to the bathroom, the Goldbergs bought the best. “(J. L. Mott Iron Works) put the first bathroom in the White House,” Alex says. Throughout the house, he’s sanded, painted, cleaned, and hauled. He broke up the basement’s old boiler, and Jessica and the children carried it out to the truck, bucket by bucket. With wry humor, Alex tallies his payments at the recycling center: “I’ve hauled three tons of scrap metal out of the basement, of old pipes and things, a water heater. I think I’ve gotten a whole $190 for it.”

One of the biggest challenges has been interior design. As accomplished as the Churchills are at work (she’s in charge of Bank of America’s strategy for corporate real estate, and he’s the chief operating officer for clean tech company InfoSense), they’ve struggled to figure out what to do with the enormous rooms. “The scale makes it so difficult,” Jessica explains. “The house can definitely absorb furniture,” Alex says with a chuckle. They tell of a school project last year undertaken by the twins: count the chairs at home. When their son and daughter reported 53, Alex and Jessica couldn’t believe it—they had that many chairs? They called for a recount, only to find out that four had been skipped.

Two years ago, they turned to Traci Zeller for help designing the great room and master bedroom. Zeller, an interior designer who’s accustomed to fine craftsmanship, was struck by the outstanding architecture. Although she wanted to honor the home’s history, the design had to be suitable for the 21st century. “That’s the challenge and the opportunity of these amazing historic homes,” she says, “to be authentic to the architecture, but keep them relevant to modern life.” Her plan echoes the architectural symmetry of the house, building depth with pairs, such as pairs of sofas facing each other, pairs of chests on each side of a doorway, and pairs of chairs at the foot of the bed. Neutral colors let deep moldings and large windows stand out.

Since they love antiques, the Churchills are taking their time looking for the right rugs and furnishings for the rest of the house. “We’ve got many years to keep collecting,” Alex says. Restorations are ongoing—he’s replated worn doorknobs, rewired sconces, and even taken apart the phone system. Lucky for the Goldberg house, the Churchills have the patience, resources, and appreciation required to sustain the project of a lifetime.

They also have perspective. “In this area, we have a tendency to tear down everything that we have,” says Alex, turning serious. “We should feel some obligation to preserve some part of our history. Because if somebody wants to tear this house down and build a gas station in 20 years—even though that might make sense—you can’t rebuild this stuff. You can’t replace the history.”