Inside Discovery Place's Collection of the Old, Weird, and Wonderful

“WE'VE GOT SOME GREAT SKULLS in that one,” Robyn Levitan says, pointing to a metal storage cabinet. But first, Ham. Levitan bends down and with both arms reaches into a shelf in another cabinet. She emerges with a carefully folded, toddler-sized spacesuit wrapped in plastic. Levitan explains it’s the prototype of a suit that once belonged to Ham—the chimpanzee NASA sent into space in January 1961. His mission provided the research that made it possible for Alan Shepard to become the first American in space just four months later.

This is just one of the more than 70,000 non-living items Levitan manages at the collections building of Discovery Place Science. Since 2014, the collection has resided in a separate space, a few buildings over from the main museum—a place most visitors never see, one for curious minds and those generally impressed by the old, weird, or wonderful. It contains items Levitan designs for the main museum displays but mainly serves as a resource for professional and amateur researchers around the globe. Here, linear time seems to collapse—where from just one shelf in one cabinet, ceramic figurines molded by the Mayans look back at you from across 3,800 years.

Levitan seems to do her own tricks with time. She’s only 31 but possesses the expertise and presence of someone much older. As I ask a question, she nods thoughtfully, then answers it thoroughly and easily. In 2007, when she was an undergraduate student at Washington College in Chestertown, Maryland, Levitan took a summer archaeology course because it offered double credit at the same cost. The course introduced her to the thrill of discovering the long-hidden, and she never looked back. 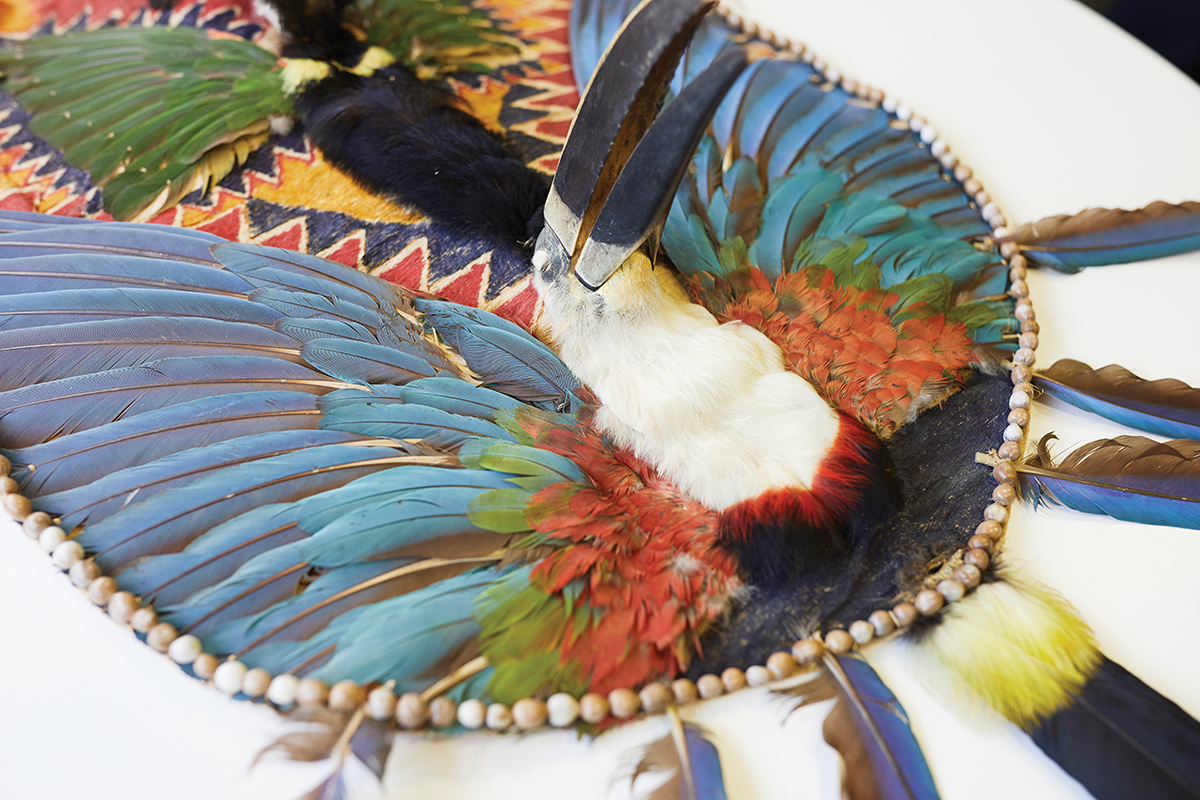 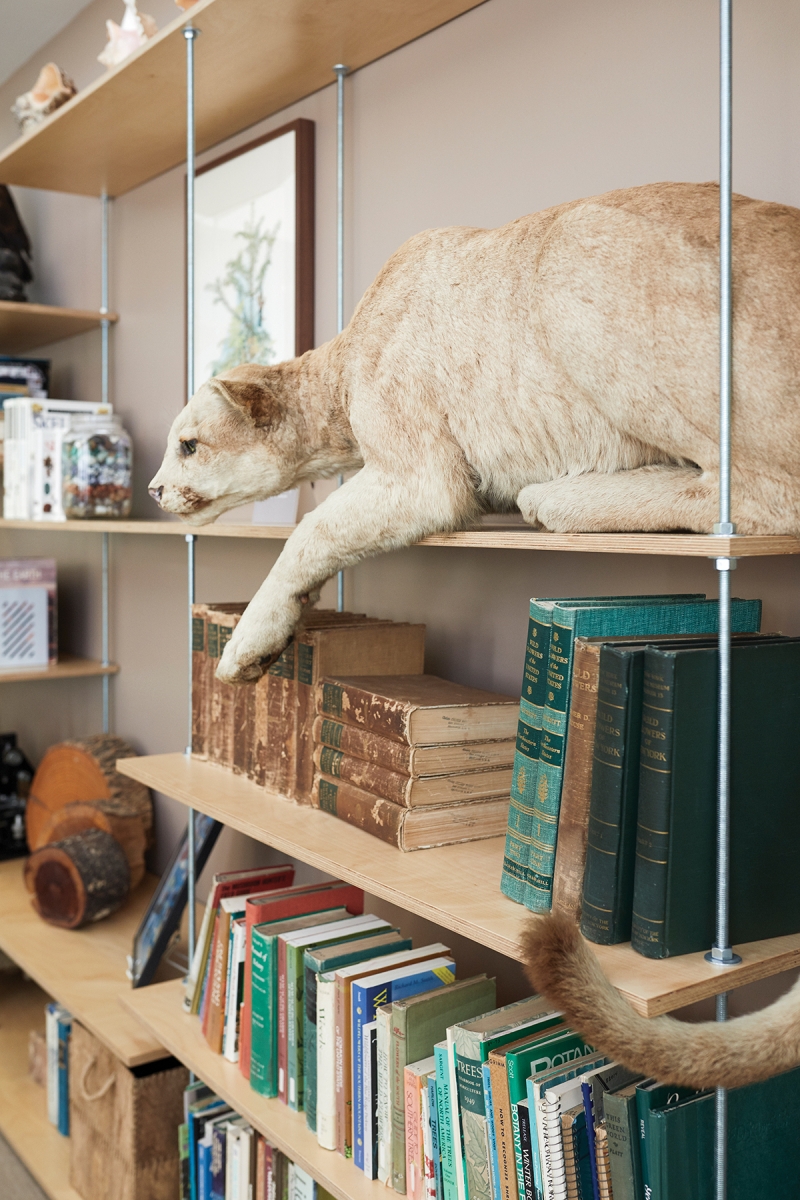 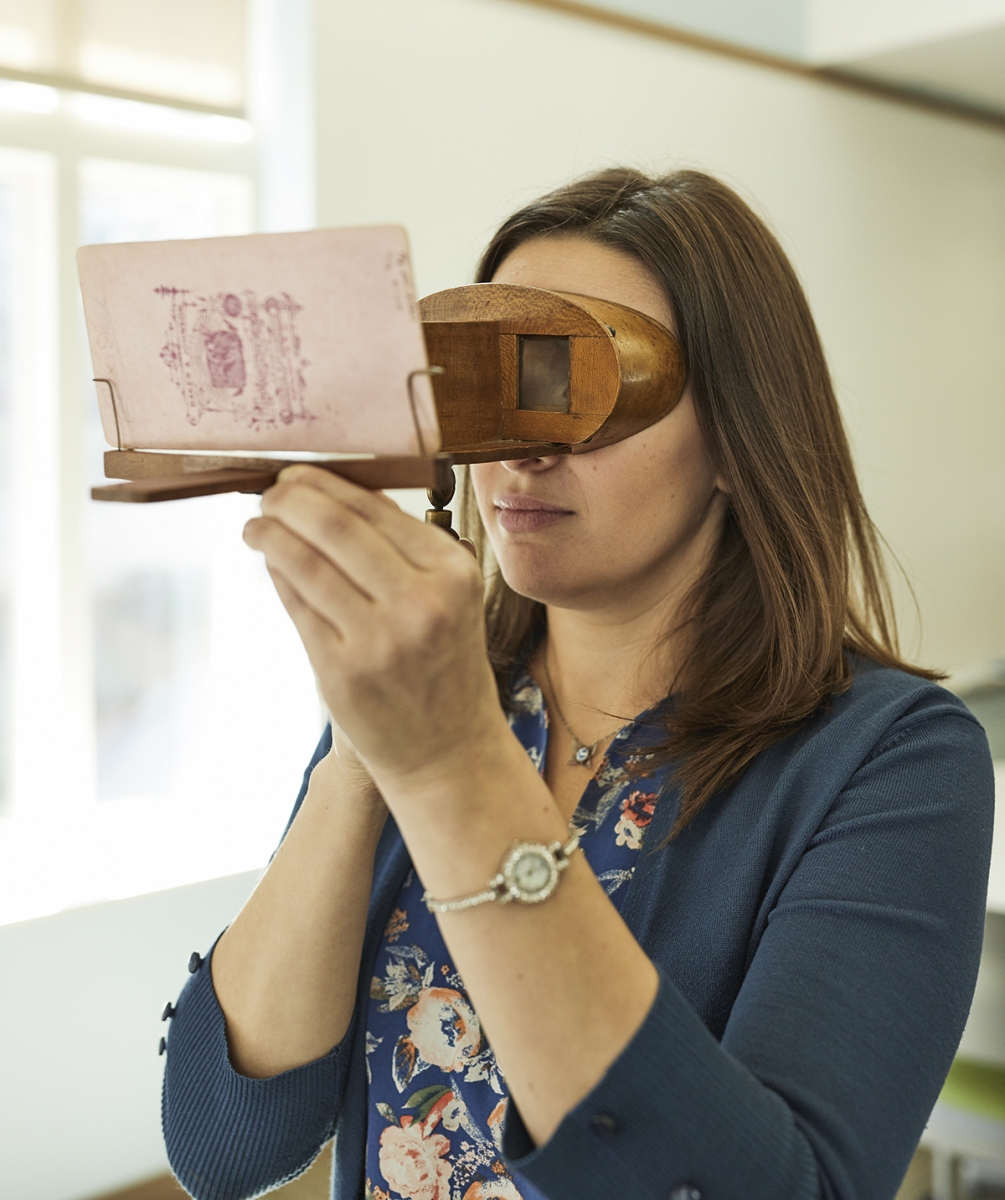 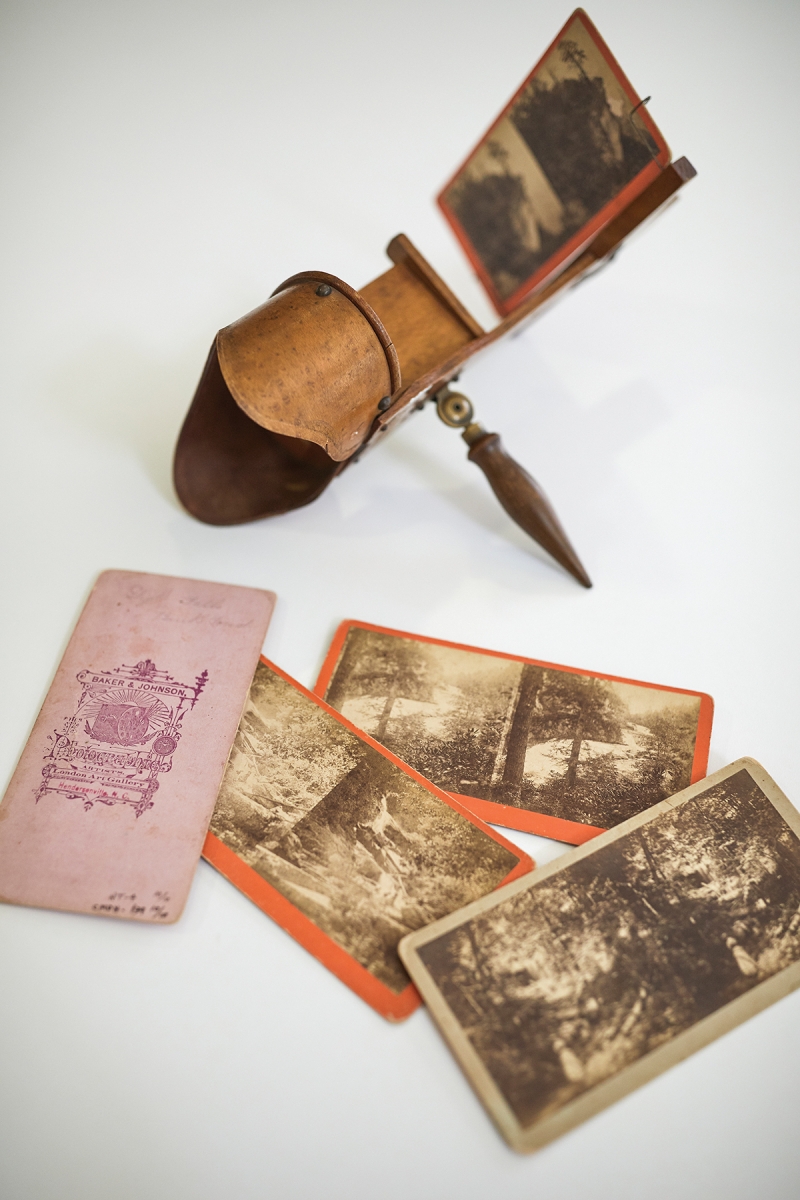 The Discovery Place’s non-living collection includes a breastplate from an indigenous Jivaroan tribe in Ecuador (top) and a preserved mountain lion (middle). Above: Robyn Levitan peers at old photographs of a waterfall through a 19th-century stereoscope.

She studied in Peru and England but eventually came back to the United States in 2012. She’s been the collections manager at Discovery Place for two years; before that, she held a position that involved taking exhibits from the museum to schools that couldn’t afford field trips and teaching to classes and groups from schools that could. “I knew if there was some way to not sit at a desk for the rest of my life, I’d be happy,” Levitan says. “I never wanted to work at a museum, because I thought that’s what it would be.”

Not this one. Each item here is carefully labeled with archival-grade ink and paper, and each has a story. Levitan knows most of them. She is the only full-time employee for the collection and relies on one part-time colleague and a group of volunteers to help with preservation and maintenance—like hand-cleaning the museum’s three iconic bears. Their goal is to publish the entire catalog online to make it more accessible for researchers.

Items here have come from all over the world through purchases or trades with other museums and field collections, or from private donors such as David Grant, professor emeritus at Davidson College. He has volunteered with Discovery Place Science for more than 34 years and donated more than 6,000 spiders—90 percent of them local to North Carolina, all of them hand-caught by him or his students. A few rows over from the spider cabinets is a two-headed kitten, floating in preservation liquid with its fur still intact, donated by a woman in Matthews when it died shortly after it was born in an otherwise normal litter.

Sometimes Levitan’s phone rings with someone looking to make a donation—often after the death of a relative who was a collector. She’s seen it all: literal hidden gems inside an old shed, asbestos, radioactive materials, hoarding situations, and hopeful donors who think they have a fossil but instead are merely the keepers of a finely made children’s model.

After entries are tagged by Levitan or a volunteer, they’re sorted as either geological, biological, or cultural and put into an appropriately labeled cabinet. C429, for instance, is reserved for “rabbits, hedgehogs, skunks, minks, weasels, and foxes.” The spiders have C410 all to themselves.

Most of Levitan’s work begins once an item is collected and catalogued—something she wishes more people understood. “As soon as we put things on display, there is a time limit. Factors like light, temperature, humidity, all have an effect on the life of an object,” she says. “I am at war with live insects at all times … But we are holding all of this for research and for the betterment of society.”

The items are split into two categories, the teaching collection and the permanent collection. The permanent collection contains the items preserved with the utmost care and designated as highly important to keeping history alive. The teaching collection is larger and contains items that can be touched or accidentally damaged. These items can be loaned to teachers in Charlotte or rotated into displays in the main museum, functions critical to Levitan’s and the museum’s goal to inspire a lifelong love of learning. It’s a goal that has recently become personal for Levitan: She’s expecting her first child, a boy, in September.

“You see the aha moment when a kid has a sample in their hands and can touch history,” she says. “There are kids out there collecting insects or rocks, and people may think they’re weird. We don’t.”

Tonya Malinowski is a producer for ESPN by day, writer and haphazard home cook by night. You can say hello at @TonyaMalinowski on Twitter.

The Discovery Place Science collection contains more than 70,000 non-living items. There are figurines from antiquity, ancient stone weapons, gold and precious gemstones, great beasts preserved in their final pose. But its crown jewel is none of those. It’s a pigeon.

At the back of the collections building is a locked door, and inside that room is a locked cabinet, and inside that cabinet is a sealed glass case. In the office are letters of verification from the American Museum of Natural History and the Smithsonian Institution. It is temperature and humidity controlled and monitored via Bluetooth. All of this is for item BD-276, a juvenile male passenger pigeon collected in upstate New York in 1884 and purchased by the museum in 1965.

In the 19th century, passenger pigeons were the most abundant bird in North America. There are stories from the time of flocks so large they took hours to pass overhead, of shouted conversations that had to compete with the beating of wings overhead.

“The stories go,” Robyn Levitan says, “that you could hold up a stick, swing it around your head, and hit at least one.”

Humans hunted passenger pigeons for centuries, using everything from large nets that caught several hundred at a time to stones they hurled at low-fliers. Their ubiquity bred the assumption that they would be impossible to over-hunt. But post-Civil War railroad expansion enabled the commercial hunting industry, and passenger pigeons were killed faster than they could breed.

The last sighting of a passenger pigeon in North Carolina was in 1894. The species officially became extinct on September 1, 1914, when the last one died at the Cincinnati Zoo.

The feathers of Discovery Place’s passenger pigeon have faded a bit over time, but you can still see the delicate slate blue of his wings and his shieldlike, copper-hued chest. He stands eternally on a branch, a time traveler here to caution us about a creature that disappeared from Earth more than a century ago and was once as common as a housefly.

This article appears in the July 2019 issue of Charlotte magazine.
Categories: In Print, The Buzz