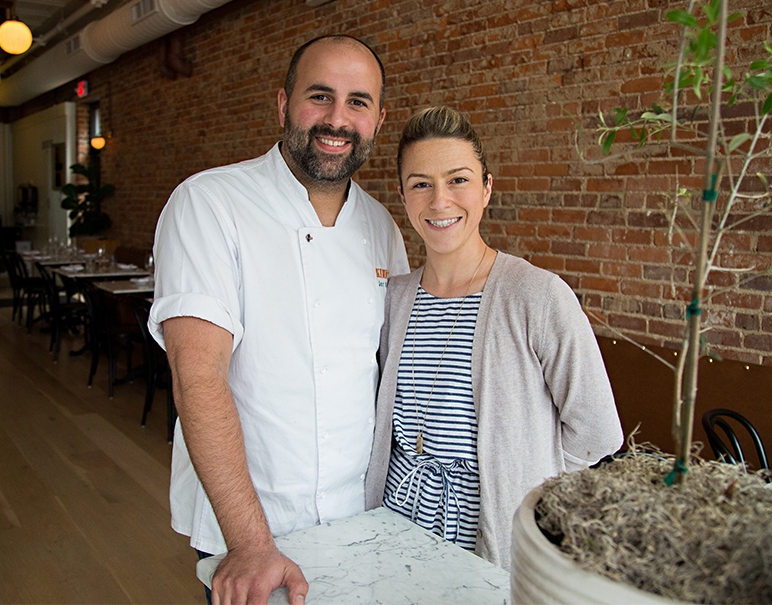 Joe and Katy Kindred in their namesake Kindred Restaurant.

JOE AND KATY KINDRED, owners of Kindred Restaurant, have signed a lease on a second restaurant. The new one, a concept called Hello, Sailor, will be in the former Rusty Rudder space in Cornelius, a waterfront building on Lake Norman. Katy Kindred says they wanted a punchy and fun name that would reflect the vibe they’re looking to achieve. “Hello, Sailor” seemed a fitting choice for a lakefront space with about 15 boat slips.

The building itself is about 4,000 square feet with a massive, tiered patio, complete with a tiki bar. It wasn’t where the Kindreds were planning on expanding—they were looking at spaces in Charlotte—but the opportunity was too good to pass up.

“There was a lot of interest in the building when they announced that the landlord wasn’t renewing their lease, and a lot of people were surprised including us—we actually couldn’t believe it,” Katy says. “We really felt strongly that it should stay in local hands, you know what I mean? That was like an institution up here; it was open for 15 years. We thought that was a really important local spot, so we worked really quickly to get an idea in front of the landlord.”

The Kindreds and Hello, Sailor beat out more than two dozen other restaurant proposals to win the lease, and they’re already conceptualizing interiors and menus.

“We’re going to have way too much fun,” Katy says with a laugh.

The couple opened Kindred Restaurant in Davidson in February 2015 and the restaurant gained national recognition on Bon Appetit’s list of the best new restaurants in America. Later, Joe Kindred earned a James Beard Award semifinalist nod for best chef in the Southeast. Since opening, the menu at Kindred has shifted slightly towards a brighter, lighter menu, but the restaurant has remained beloved to locals and a frequent special occasion destination for visitors from Charlotte.

Katy says they’ve been building at team at Kindred with expansion in mind, creating a staff that can handle the restaurant in their absence. They’ve been cross-training and creating onboarding systems to streamline new hires, and keeping a close eye on who works well together and which staffers would be more comfortable in which environment.

“We feel really strongly that it’s important to identify people’s natural gifts and then put them in positions that are best for them,” Katy explains. “Then, everybody wins. They’re happy, they feel challenged, and we get the best possible team together.”

As with their debut restaurant, Katy will oversee the design of the new space. The husband-and-wife team hopes to have the waterfront restaurant open in the first half of 2017, when the weather begins begging for a patio and a cocktail.

“I would imagine we’ll be slinging a lot of tiki drinks,” Katy says.

This article appears in the November 2016 issue of Charlotte magazine.
Categories: Food + Drink
Contest of the Month