IT'S THURSDAY morning in NoDa, and residents Scott Lindsley and Joey Hewell plan to meet at their usual morning place, Smelly Cat Coffeehouse, just a block from their home and urban garden on 36th Street. 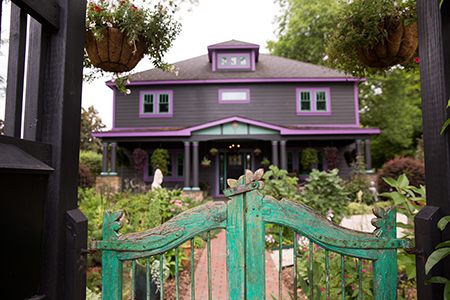 Linwell Farms is located in the middle of Charlotte’s NoDa neighborhood.

Lindsley arrives first–on foot, of course. He wears flip-flops, camouflage shorts, and a tank top that reveals a Queen City crown tattooed in the center of his chest. His arms are also covered in colorful ink, and he holds a plastic watering jug in his hands. The realtor and owner of Janus Real Estate is relaxed and unhurried. His husband, Hewell, co-founder and full-time manager of the NoDa Farmers Market, is still at the house.

“He’s filling up the water bottles,” says Lindsley. He explains that the water is for various flowers, herbs, and fruit trees in the neighborhood, items they’ve planted with proceeds from the farmers’ market to beautify otherwise empty spaces. 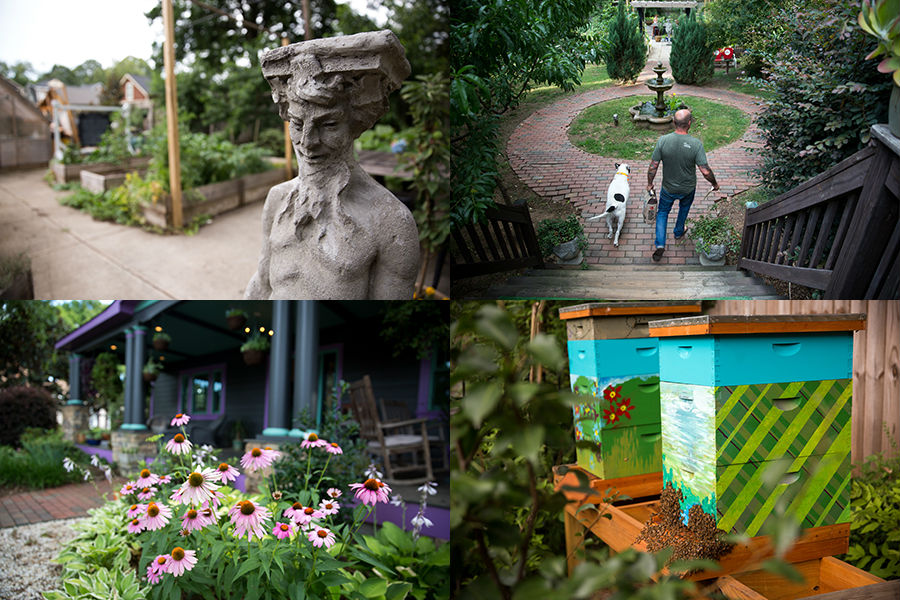 Clockwise: Pan, the Greek god, welcomes visitors to the garden. The urban garden is cared for by owners Scott Lindsley (pictured) and husband Joey Hewell. Two bee boxes are located on the right side of the garden.  Purple coneflowers greet visitors at the entrance of the home, on 36th Street.

Hewell arrives with a backpack strapped onto his shoulders. The three of us walk around the block, stopping to water planters filled with herbs and flowers near the fire station on North Davidson Street and two fruit trees near Fu’s Custom Tattoos. We round the corner back to 36th Street toward the turquoise-tinged gate of their home, an imposing historic house that was once a brothel, among other things. If you drive down 36th toward the center of NoDa, you can’t miss the gray, purple, and turquoise house practically waving at you from the street.

In the spring of 2013, Lindsley and Hewell moved in and transformed their property into a lush paradise, laden with edible landscaping and a not-so-small, homegrown garden operation called Linwell Farms. It’s named after [Lin]dsley and He[well], and gives new meaning to the term concrete jungle. 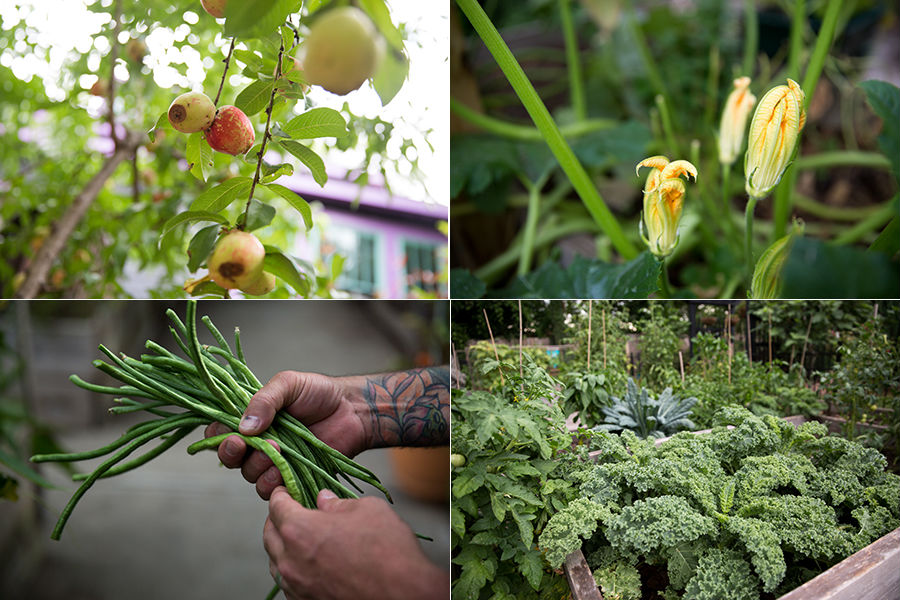 Linwell Farms borrows its name from the names of its owners, [Lin]dsley and He[well]. Among the harvest at Linwell Farms are nectarines, squash, kale, and Chinese long beans.

After their morning walk, they jump straight into their morning routine, watering and tending to the small jungle they’ve erected in their front and back yards. The front yard boasts a wrought iron fence lined with colorful swaths of perennials–black-eyed Susans, coneflowers, stevia–and a Little Free Library box, where folks can take a book or leave one. A soothing fountain with a statue of Buddhist goddess Tara provides the babbling soundtrack for a walk up the brick walkway leading to the spacious front porch. Hanging baskets dripping with vining plants frame the facade and greenery abounds, including a table covered in fall starts, seedlings ready to be planted this fall in their urban garden. 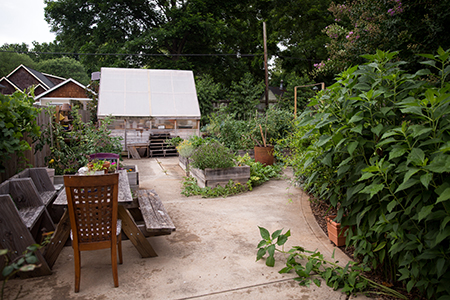 When the property was zoned for commercial use, the home’s backyard was covered with concrete. Instead of passing on the home, Hewell and Lindsley bought it and used the space as a base for a raised garden. 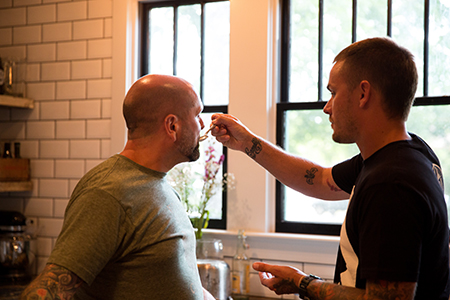 Hewell uses Lindsley as a taste-tester before serving a dish to friends. 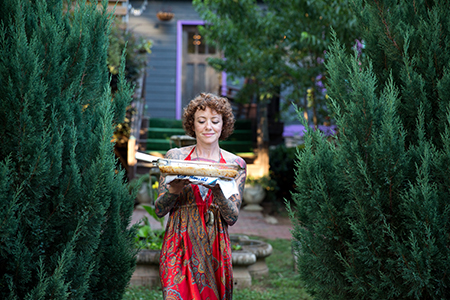 Friend Courtney Valvo carefully balances a casserole that Hewell made using fresh squash, onions, and garlic from the garden.

As you walk through the home, past the couples’ newly remodeled kitchen, you’ll find a back door opening onto a small deck. Hewell, a builder, created a charming outdoor shower here, inspired by a trip to St. Lucia and a desire to have a place to rinse off after a workout. He’s an avid Crossfitter. The shower is made of reclaimed wood, and the area is colored by still more plants. Stairs lead down into a courtyard space with a large fountain at its center, an outdoor shower of sorts for the birds, surrounded by a circular brick walkway. On the left, a shady orchard is home to an apple tree, a nectarine tree, and two plum trees. Large, bulbed string lights zigzag lazily through the fruit trees and nearby fence.

Pan, the ancient Greek god of the wild, stands sentinel at the entrance of Linwell Farms, welcoming guests into the garden space.

An intricate network of raised beds sits on top of a large concrete slab, a feature left over from when the house was zoned for commercial use. Its original function was presumably as a parking lot. On those slabs, Hewell and Lindsley saw an opportunity in what other potential buyers saw as a hindrance.

The garden at Linwell Farms is by far larger than any they’ve had before. The beds, made of pine boxes, create a horizontal border to anchor the space.

A large compost bin holds the mineral rich soil amender they use to replenish their beds— everything from dead leaves to plant trimmings and food scraps are turned into soil. 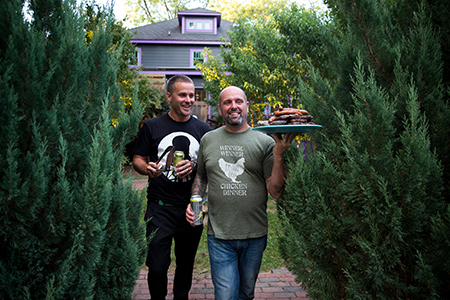 Hewell and Lindsley bring hot dogs and hamburgers to the table.

“It’s all been trial and error,” says Lindsley. “The more we learned, the more we began to think about sustainable practices, like composting.”

The two began their journey into gardening eight years ago, finding inspiration in a friend’s garden. They started small, with two three-by-eight foot beds, and gradually added on over the years and across multiple residences.

On the right side of the garden are two bee boxes artfully painted by the duo, a new addition brought in to help pollinate the bountiful garden. Lindsley and Hewell were recently certified as beekeepers by the state. 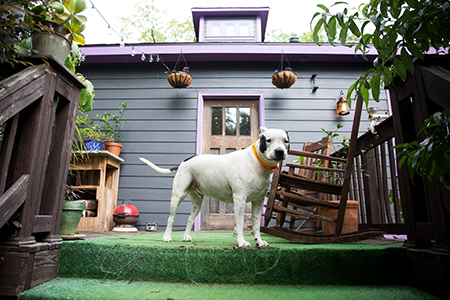 Wicky Wayne hopes to nab some food from a guest.

A high-top table constructed of wooden pallets sits directly behind the statue of Pan, providing a space for outdoor dining and garden parties.

“We were really intentional about having open space,” says Lindsley.

Despite their desire for an open space, it’s often packed with friends these days.

“Linwell Farms started off as a joke,” says Lindsley. “It’s just what we called the garden. But then, people started asking questions.”

The two started a blog in 2013, sharing their tips and experiences with other home gardening enthusiasts. Since then, their enthusiasm has opened up educational opportunities to share with a growing audience. The two have been filmed for the PBS series The Victory Garden, taught children about food and its origin through YMCA summer camp, hosted a weekly segment on Fox46 called Dirt on Fox, and, most recently, started the wildly popular NoDa Farmers Market, directly across the street from their home.

Friends gather for dinner and conversation at a summer party.

This article appears in the September 2015 issue of Home + Garden.
Categories: Feature, Outdoor Living
Contest of the Month