MAC'S SPEED SHOP competed in the annual Memphis in May competition last month, bringing home a second-place finish for their whole hog cooking. The Memphis contest is one of the most prestigious barbecue competitions in the world, with names such as Myron Mixon battling it out for the best ‘cue. Participants are judged blind, in what’s called a “blind box,” and judged at their site on how they present their barbecue. Last year, Mac’s finished 14th due to an unfortunate wind. This year, they finished just short of first place. Here’s how they did it, by the numbers.

Name: “The Rig” or “The Competition Rig”

DOB: Mac’s Speed Shop got the smoker two years ago, specifically for this competition

15,000 pounds is what the team guesses is the rig’s weight. It’s built for utility and entertainment, with features including running water and a rooftop deck. There’s also a fold-down picnic table, where judges will sit to hear the Mac’s team’s presentation about their barbecue.

2: The rig has two smokers; one is a Backwoods Pro Series water smoker, the other is a Lang reverse flow smoker.

F-350: Chef Kevin Kuruc says it takes 10 hours to drive the rig to Memphis, partially through the mountains of Asheville. The rig has its own brake system, but the drive is still nerve-wracking. "This thing will push you down a mountain in no time,” Kevin says.

2: TVs hanging from the roof, which are usually playing ESPN. The rig also has a satellite dish.

6: Months for the rig to be built. It included a lot of custom welding work, which was done by a Mac’s employee.

1: Cooler for prep, which can be moved around on the deck

10 by 20: The size of the two pop-up tents surrounding the space

213: The site number the Mac’s team sets up in every year 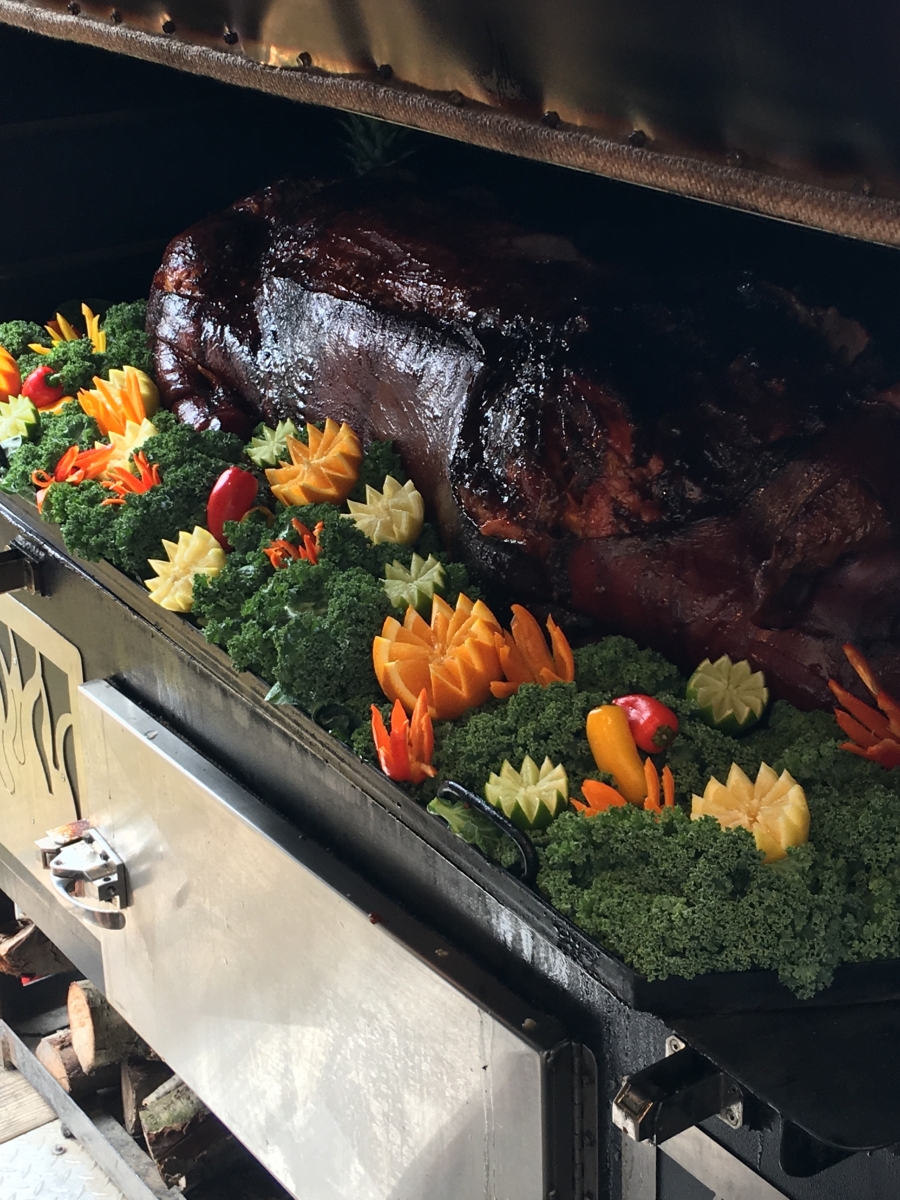 6: People on the Mac’s team. They’ve had the same team members since they started competing in 2011. “We've ben stumbling through and really working hard at it, and trying to figure out what we're doing wrong and what we did right,” Kevin says.

22 hours: The length of time the whole hog is on the smoker. Someone is keeping an eye on the temperature at all times.

200 degrees: The initial heat on the smoker, which helps create more smoke early on. It stays here for about two hours, before heating up to its cooking temperature of 230-250 degrees. The temperature is maintained using an air damper.

2: Layers of insulation, one inner layer of cast iron and a stainless steel outer layer. It can keep its temperature for seven to eight hours before requiring more fuel.

25 pounds: Amount of peach and hickory wood the team burns to fuel the smoker. The wood mix is 2/3 peach, 1/3 hickory. “Peach doesn't burn as hot, it's more of a smoldering wood, and it has a sweeter smell and flavor it imparts on it,” Kevin says. They also use 30 pounds of charcoal.

1.5 hours: The amount of time the hog ideally has to rest before being cut into

184: Pounds this year’s hog weighed in at, before cooking

8+: The number of pounds of barbecue Chef Kevin says he ate during the Memphis in May weekend.

195 degrees: The ideal cooking temperature for the shoulder. You want the ham at 185, and the loin between 135 and 145. Chef Kevin has a tin-foil covered secret to help keep the loin from overcooking and drying out while the rest of the hog cooks.

50/50: The ratio of the two seasonings the team uses on their hog, which are the Mac’s proprietary rub and brisket rub.

15: Ingredients that go into those rubs

30+: Teams in the whole hog competition; there were more than 240 teams overall. Mac’s finished second in the whole hog category, behind winner Melissa Cookston. “The largest are in the rib category only for its ease of cooking because they like to party,” Kevin says.

8: Former Grand Champions in the competition

Congrats to Mac's Speed Shop on the win!

This article appears in the June 2017 issue of Charlotte magazine.
Categories: Food + Drink