A look inside the diverse community on Charlotte's east side

Stephanie Bercht feels bad for people who live in South End apartments. The coronavirus pandemic and stay-at-home directives in spring forced people to reckon with where they lived, and access to the Blue Line and lavish amenities suddenly mattered less than proximity to parks and shady backyards. “We’ve got all this space out here,” Bercht says. “There’s just so many trees here too, so you get a lot of birds.”

Bercht and her husband live in Plaza Shamrock, a quiet neighborhood of tidy midcentury homes between NoDa, Plaza Midwood, and Country Club Heights. The pair moved here in 2018 after a surprisingly difficult quest for an affordable home with a garage to use as a workshop. Plaza Shamrock’s modest ranch-style bungalows evoke another time, when garages and ample yards came standard. Single-family houses in the neighborhood are, on average, 64 years old. The Mecklenburg County average is 33, a figure dragged down by the spate of new builds in Charlotte’s close-in neighborhoods. 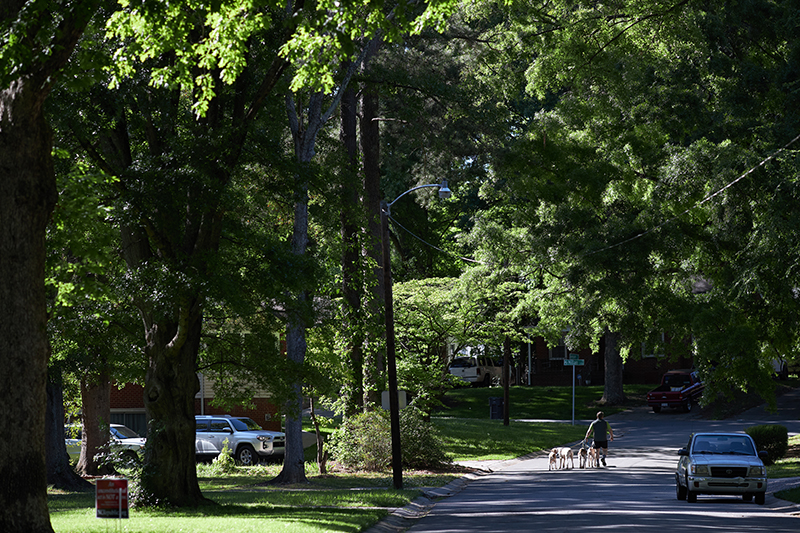 “Our neighborhood didn’t see the smash-and-rebuild that was really frequent,” says Stephanie Phelps, president of the Plaza Shamrock Neighborhood Association (Bercht is its secretary), whose website calls the area Charlotte’s “best-kept secret.” That could be because only 38 percent of the homes in the neighborhood are owner-occupied. But Bryan Fisher, an association board member who bought a house here in 2016, says that trend is changing as young couples and families invest in the neighborhood. “You see a lot of folks working in their yards, and they’re increasing their own property values and their neighbors’ in the process,” he says. “There’s a lot of community pride.”

Yet Plaza Shamrock suffers from a lack of name recognition, even among people who live there. It shares part of its name with Plaza Midwood, and Charlotte’s multiple listing service refers to the area as Plaza Acres. Last year, the city awarded the neighborhood association a matching grant for sign-toppers—those little markers on street signs with the neighborhood’s name—to help visitors and residents identify this maze of (mostly) residential streets. You may recognize Letty’s, Pike’s Pharmacy, and Colonial Florist—all on Shamrock Drive—as part of Plaza Shamrock, but the neighborhood also includes the Giant Penny grocery store and Tamales La Pasadita, both on The Plaza, and Crispy Banh Mi, on Shamrock but just off Eastway Drive.

This corner of Charlotte’s east side has remained diverse. In 2017, 44 percent of neighborhood residents identified as black, 39 percent as white, 9 percent as Hispanic or Latino, and 4 percent as Asian. In an expansive 2014 study of Chicago, Harvard researchers concluded that gentrification accelerates when a neighborhood’s white population reaches 35 percent but stops when the black population tops 40 percent. Plaza Shamrock seems to rest in a sweet spot, maintaining economic and racial diversity as it—for now, at least—staves off the steep rise in land costs that has made once-affordable neighborhoods like Plaza Midwood and NoDa off-limits to all but the affluent. That could change as first-time homebuyers are priced out of Plaza Midwood, where the average home price in April was $584,218, and turn to nearby neighborhoods.

Plaza Shamrock’s lower average home price—$269,500 in April, according to the regional Realtors’ association, Canopy—and improving schools attract young families. This summer, Charlotte-Mecklenburg Schools will begin a $30 million rebuild of Shamrock Gardens Elementary School, a 45-classroom facility scheduled to open for the 2022-23 school year. The median age of Plaza Shamrock residents is 39, which reveals a good bit about the area’s character: During the stay-at-home orders, children frolicked in front yards and set up slip-and-slides. Residents lounged on porch swings. A young couple sat in plastic chairs 6 feet from an older pair on their front stoop.

When musician Josh Daniel bought his small property on Jensen Street for $86,000 in 2006, he figured it would be a starter home. Now his family of four shares the roughly 1,100 square feet. “We don’t want to leave,” says Daniel, a solo performer and member of the Winston-Salem band Big Daddy Love. “We’re making it work.” To expand his office space, he planned to install a tiny house in his backyard this month. 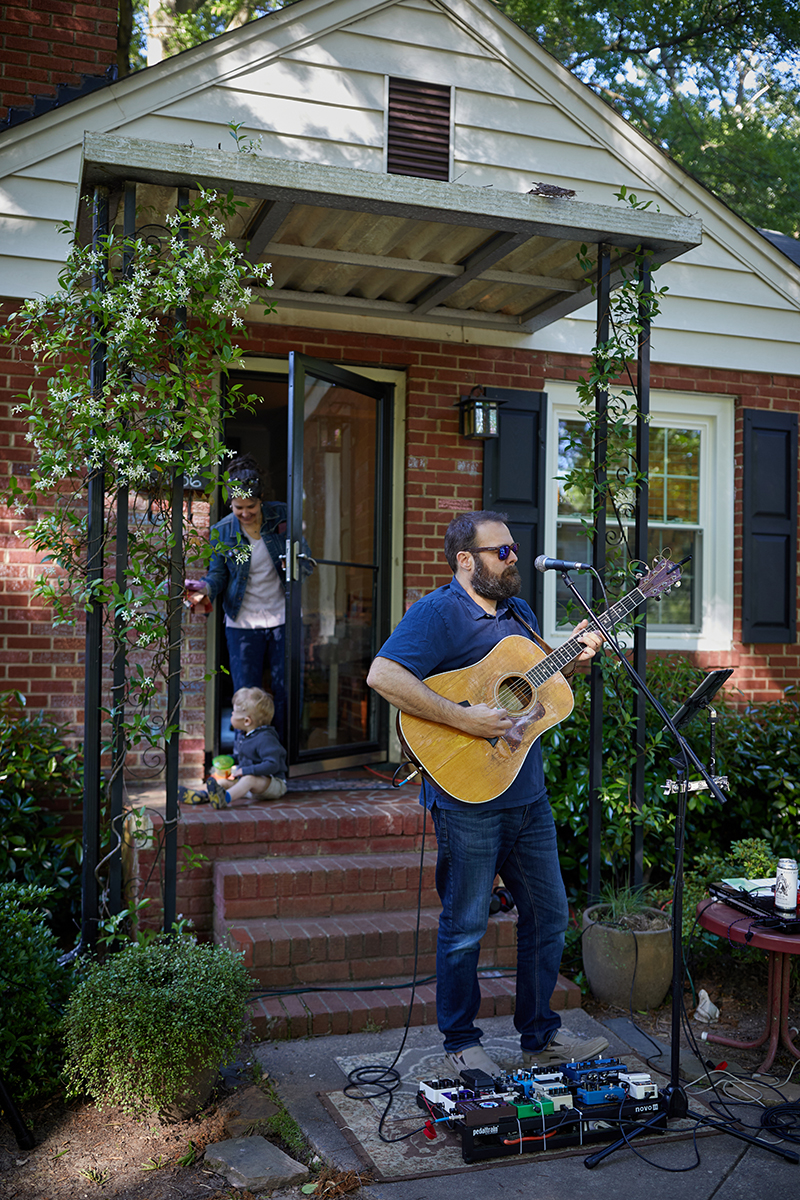 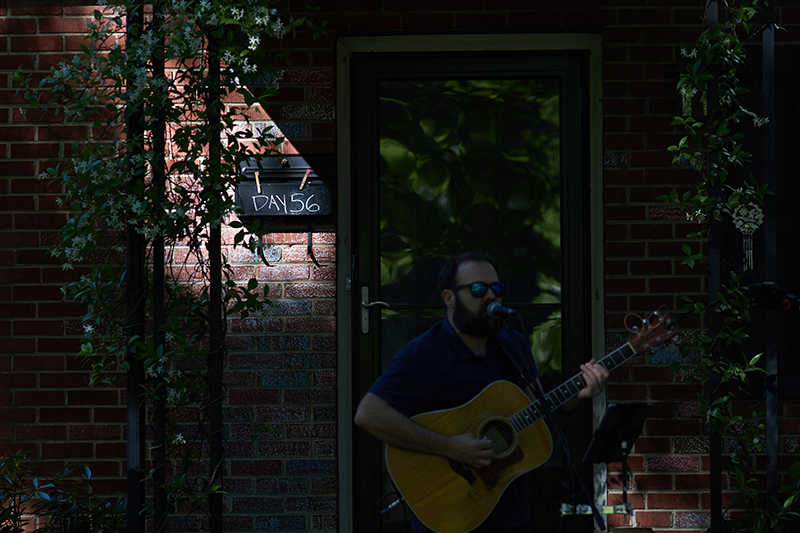 What Josh and Kellie Daniel (left, with their 2-year-old son, Sonny) thought would be a starter home has become the place they don’t want to leave. Josh tracked the days of coronavirus lockdown on his mailbox (above, right). Photos by Logan Cyrus.

When the coronavirus invaded Charlotte, Daniel, 41, lost all of his gigs, which he depends on to support his family. His 2-year-old son, Sonny, has a rare genetic syndrome that causes bone fusion, and he was due for major skull surgery and a weeklong stay in the NICU on March 30—right in the midst of the pandemic. Daniel says he planned to earn money by livestreaming nightly performances from his bedroom. “‘What? Why?’” he recalls his wife, Kellie, saying. “‘You need to put your speaker out in the front yard.’” His neighbors, all close friends, came out to enjoy the music—at a safe distance, of course. As of mid-May, he’d performed and streamed his “quarantine sessions” for 56 evenings straight. Listeners have sent thanks from Canada and Germany. “I look forward to 5 p.m. every day just so I can listen to Josh!” one commenter wrote. “I am still working so it’s been a rough time.”

Proceeds from his virtual tip jar and merch sales haven’t just kept him afloat. He’s been able to pay off debt and fund the tiny-house construction. The season of coronavirus only tightened the close community that residents valued before. Like a Norman Rockwell painting brought to life, Claudette Skidmore recently gave her nearest neighbor part of a cake she’d baked with eggs the neighbor had picked up for her. Another neighbor picked up supplies for her from Home Depot, and others check in on her regularly.

Skidmore and her husband, Mike, bought their house on Elkwood Circle from the original owner, William Thomas, in 1973; Skidmore still refers to him as “Mr. Thomas.” When the house was built in 1948, Mr. Thomas told them, Shamrock Drive was a dirt road. Nearby Garinger High School was a dairy farm surrounded by cow pastures. Through nine presidencies and decades of Charlotte’s growth, the Skidmores have stayed put.

The virus hasn’t changed Plaza Shamrock much. People are outdoors, planting summer gardens and doing yard work, fixing up their cars. Buses on Route 23 still trundle down Shamrock, and cyclists cruise the neighborhood’s winding, hilly streets. “The biggest difference right now,” Mike Skidmore says, “is that at this time of year, you would hear Garinger playing baseball.” On a Friday in early April, the dugouts are empty, and Plaza Shamrock is quiet. Just before 5 p.m., Daniel tunes up. The birds sing, verging on riot.

ALLISON BRADEN is a writer and Spanish translator. She is a contributing editor to this magazine.

Fun fact: Plaza Shamrock was once home to the Plaza Airport, which hosted an all-black air show to benefit the Charlotte Negro YWCA and YMCA in 1947—the year before the Skidmores’ house was built.