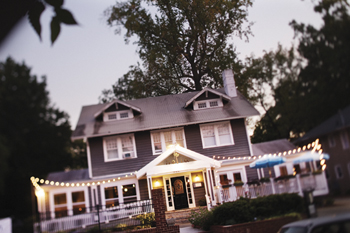 Pamela Marcotte and Avi Kendi, owners of the recently opened Nolia (as in magnolia), are brave souls indeed. They chose to open a restaurant in a location where many others enjoyed the staying power of a tumbleweed. Ethan's, Solera, and Pearl, among others, have tried to make it a go here at 366 North Caswell Street, to no avail.

Sitting at the bar on one visit, we notice nothing about the location that would indicate it's haunted, so we forget about ghosts and have a libation. Good bourbon, vodka, and martinis are showcased, and the wine list features more than sixty selections from reputable vintners including Nickel & Nickel, Far Niente, and Foppiano; and there's nothing over $70. The Hey Mambo meritage from California is supple and strong—well worth the $36.
The dinner menu is simple and straightforward, with seven appetizers ($8-$10), two salads ($8-$9), and seven entrées ($15-$22). Nolia can be classified as "new Southern" cuisine, but there's a Mediterranean plate in the first-course section, a New York strip entrée, and a seven-layer dip (the Mexican pot luck standard), which, oddly, is also offered as a sandwich on the lunch menu. And, while you won't find anything mind blowing at Nolia, what you will find are simple dishes cooked well and aptly delivered by a friendly and capable staff.

In spite of this, there are a few sloppy executions, odd menu choices, and minor annoyances. On one empty weeknight, the chef hovers near the bar as we eat, peppering our conversation with the bartender, almost certainly out of boredom. He's excited that he had some "huge" oysters come in that day for the fried oyster starter. Really? If I were forced to pick the perfect oyster to fry, it almost certainly wouldn't be a huge one, but we try them anyway. The flavors are good, but fried oysters should go down in one crispy, briny bite, not two. Mussels are fresh and steamed in a flavorful white wine and garlic broth with grilled baguette slices while the Mediterranean plate offers olive-oil-spiked house-made hummus, tabbouleh, black olives, and grilled pitas—a well-designed mix of flavors and textures. But the crab cake, sadly, misses. Crab cakes are most delicious prepared simply—pan roasted with fresh lump crabmeat as the star. At Nolia, however, they're deep fried with too much filler and coated in panko, which gives it an off-putting, nuggetlike texture.

Entrées are much more consistent. The signature short ribs are wonderfully tender and flavorful atop Parmesan grits and tangy collards. A roasted chicken breast is at once crisp and moist with crunchy green beans and garlic mashed potatoes. And a New York strip special is superb, served sliced and fanned atop scalloped potatoes and patiently caramelized Vidalia onions, which deliver complex flavors of leather and sweet tobacco and swirl with the juices of the aged beef with heady results. A quick swallow of wine completes this sensory assault and leaves me wanting another bite immediately. To finish, six desserts are available for $5 each, including a welcome, if unremarkable, bread pudding.

Lunch is offered during the week with an equally simple menu. Included are six salads and starters ($6-$9), and ten or so sandwiches ($6-$11). There are burgers, the aforementioned seven-layer-dip sandwich, grilled pimento cheese, and something called New York's Best hot pastrami sandwich for $10. New York's best? You kiddin' me? In New York, pastrami is lean, shaved thin, piled high, and often served with good deli mustard. Nolia's version is tough, thick, fatty, and served dry.

Past failures aside, the space has good bones. It's a big, old, craftsman-style house, with a patio and table seating in several rooms that circle the first floor. Up the wide central staircase is a room that can host private parties for up to fifty guests. The décor is simple, understated, and comfortable, with big windows that grace each wall and offer views of Philosopher's Stone, the bar across the street, and the manic Seventh and Pecan intersection. It's located on an awkward corner, but there's plenty of parking.

I give the owners of Nolia credit for their ambition, though. They're filling every inch of their operating week with activity by offering a full lunch menu, brunch on Saturday and Sunday, a beer dinner on Monday night for $35 (three courses and three beers), and a Tuesday-night wine dinner for $35 (three courses and three wines). The latter two offerings are a very good value in this dicey economy, and a good option for the dense local populace who don't need to fill up on gas to get there. These are special touches for a nice, little neighborhood joint. However, it's only been open six months, and I would expect some attrition in these offerings depending on what works or doesn't.

Young restaurants like Nolia can and should experiment with many aspects of the operation to find the right formula. They've hired a chef (a recent Johnson & Wales graduate, Joshua Rosenbaum) who, despite his helicopter-like tableside manner, is well trained and has a few good ideas. But to finally exorcise the ghosts, what Nolia really needs is a long, honest look in the mirror on menu choices (bigger, more creative) and they should relax a little on their execution, wait staff and kitchen staff alike. At the moment, they seem a bit stiff and nervous. Which I guess is understandable if past is prologue at 366 North Caswell.