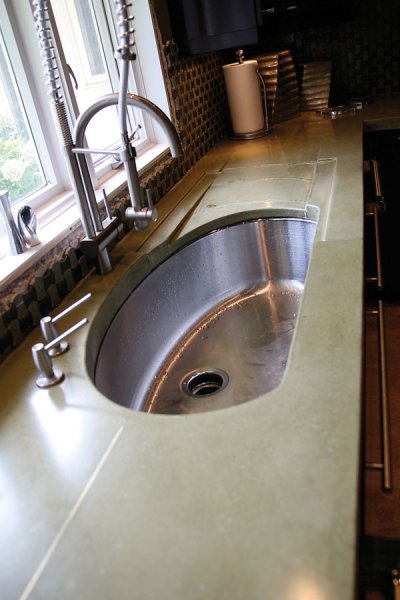 Thirty-one-year-old Eric Boyd has a shop in Plaza Midwood where he turns concrete into gold. Well, actually, he turns concrete into home fixtures into gold—as in a prestigious first-place award, as in the kind of golden opportunity Boyd’s been dreaming of since he was a kid. Boyd runs a design firm called Reaching Quiet along with fellow Principal Mills Howell, Manufacturing Director Benjamin Ross, and Master Craftsman Tobias Wygand. The foursome recently landed Best of Show for Design and Craftsmanship at this year’s Cheng Design Competition in Las Vegas for a circular bar they built out of concrete, walnut, and steel. It’s a dream come true for Boyd, who is a self-proclaimed design junkie. “And I have been for about twenty years,” he says. Boyd created Reaching Quiet “to push the boundaries of material in general,” he explains. “To push an earthy aesthetic that fights the stale, sterile feel of modern eighties design.”

Reaching Quiet (RQ) makes everything from countertops to entertainment centers out of concrete mixtures. The result is unique, because its products manage somehow to feel both ultramodern and rustic. The signature look of an RQ design—be it a molded concrete countertop with carved-in accouterments such as cutting and draining boards, or a stunning television stand made of California redwood, copper, and cement—is undeniably sleek and contemporary. It also looks old-worldly, like it could have been created ages ago by a skilled craftsman. This mix of past and present is one RQ seeks to achieve with everything it produces. For example, RQ’s crew embedded fossils in the concrete of a reception desk it recently sold. “One of the things we play with is time,” Boyd says, “because a lot of people think if they were to do a modern, say, kitchen, it’ll eventually look dated. But our stuff has a handmade element that makes it look timeless.”

And that makes RQ’s products more adaptable than most modern designs, explains Howell. “A lot of our work is based toward the contemporary,” he says. “But people are still using it in French country settings, for example. And a French country home, in reality, would likely have had a concrete countertop. Our products end up looking quite appropriate. We spend a lot of time trying to express how much we can do, actually,” Howell says. “Our stuff is designed to be subtle and useful. Beyond looking gorgeous, our work is built to function.”

Reaching Out
Howell and Boyd say it was difficult, at first, to get people to understand that their fixtures can have a wide range, designwise. “What we’ve also been fighting over the years is a lot of bad concrete work,” Boyd says. “You’ll have a lot of contractors trying to handle it themselves, but there’s a lot more than concrete that goes into our mixtures. Trust us, if you’ve seen one concrete countertop, you definitely haven’t seen them all.”

Indeed, it is, as they say, all in the mix. The durability and beauty of RQ’s concrete, colored in shades like terra cotta, saddle, wine, and amethyst (though Howell says RQ can match any paint chip, really), is a result of the way the company carefully combines the components in its cement mixtures. “It’s not an easy process,” Howell says, adding that there are fibers, accelerants, pigments, and “some secret ingredients” that all need to be added in very specific amounts to the concrete concoctions they use. “One of the reasons we’ve had so much success is the time we put into our mixtures.”

The company has completed more than a hundred projects in Charlotte over the past five years, but perhaps the true measure of its success is that award it just scored in Vegas. The win is especially significant because designer Fu-Tung Cheng, head of the prominent Berkeley, California-based architecture firm Cheng Design, is credited with popularizing the kind of poured-concrete countertops that Reaching Quiet has, apparently, perfected.

Moving Forward
Now, RQ plans on taking its success one giant step forward by founding an architectural arm of the company. “We want to take everything that people love about what we do here and turn it into an entire house,” says Howell. “We want to do entire Reaching Quiet homes.” The guys say they’d like to have their first house built next year, using the same components that make up their current products, including exotic woods and renewable resources like bamboo and wicker. “We try to come as close to green products as we can,” Howell says. “We want to do uncommon things with common products that don’t really hurt anyone. We want a wow factor with a craftsman feel.”

Boyd says the company got its name from this kind of aesthetic. “Reaching Quiet is what we want our products to do,” he says. “We want them to reach out, but to fit into the environment as well. We want them to project timelessness and subtlety—to have that wow factor without being jarring.”

How much it will cost to build an entire home around Reaching Quiet’s singular conception remains to be seen, but the guys say that the price of the concrete fixtures currently available from RQ are equivalent to that of high-end granite. “We tell clients that if they can afford $100 to $115 a square foot, then they can afford our products,” Boyd says.

This article appears in the Home & Garden June 2007 issue of Home + Garden.
Contest of the Month