At Cosmos Café, two chefs are better than one 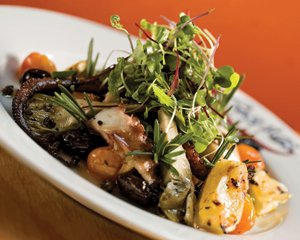 Cosmos has consistently had two problems, and they're both concept related. One, owner Andy Kastanas seems determined to pull off a fully international menu with dishes from around the world—a mean feat for even the most talented chefs. Two is deciding whether it's a bar or a restaurant. For plenty of people, Cosmos is a swanky spot for after-work mojitos or preclubbing Red Bull-and-vodkas. Yet Cosmos has usually employed serious chefs attempting to do serious food. Those are two concepts that by no means should be able to coexist, yet they have for a decade. Which has got me thinking.

Maybe it's OK. I might want restaurants to do one thing and do it well, but maybe that's not the way it has to be. So here's to you, Cosmos Café. I raise a specialty martini with three kinds of liquor and sweet fruit juice in your honor.

And Cosmos is doing some serious food right now. For the moment at least, there may not be a more talented kitchen staff in the city. Gabriele Grigolon, who helmed Luce and Toscana for several years, has recently joined executive chef Mickael Blais in the kitchen. Blais did a high-profile stint at the late Bistro 100 before settling here. They're stubbornly sticking with the international menu theme — dim sum, satay, sushi, penne, and tuna niçoise salad all have homes here — but at least these guys can cook. Grigolon's housemade gnocchi tossed with summer vegetables and luscious bits of shrimp and bay scallops ($18.95) is tasty, as are the sweet and spicy steamed ginger-lobster dumplings ($7.75).

Menu categories include salad and soup, mezes and tapas (which are half price every day between 5 and 7 p.m. — a great deal), pizzas, entrees, and features. The international influence pervades, but the more adventuresome items reside in the tapas and features categories. This is where Blais and Grigolon get to play. Still, there are worthy options elsewhere, which is what helps make Cosmos an excellent restaurant for groups of varying palates. Lunch adds sandwiches, such as a savory gyro ($7.25).

For a place that physically has changed very little, as far as I can tell, over the years, Cosmos Café is still a really cool-looking restaurant. Cosmos was designer/artist Boris Tomic's Charlotte debut, and it remains his signature space. Tomic loves to work with natural, earthy materials and colors, to which he adds layers of sensual texture and moody color. The floors at the trilevel Cosmos are rich stained concrete and burnished wood. Chairs and tables are wood. Set off by wavy brass plating, the kitchen is open for viewing; a circular bar occupies the middle of the space. Modern art, often paintings from skewed perspectives, is everywhere. The vibe is extremely urban.

Urban, but not exceedingly, say, romantic. No matter how serious the food, it's impossible to forget that this is a bar, too. The later it gets, the more the bar scene expands. But hey, the bar crowd deserves good food, too, right?