A serial renovator takes on a timeless structure’s dated interior

THE HOUSE AT 3501 Sharon Road could have been the set of a 1970s-era film. But as Melissa Owens wandered through the home’s rooms during an estate sale in early 2013, she looked past the shag carpet, metallic wallpaper, and orange countertops and envisioned the possibilities. The 1964 painted brick house, which is a neighbor to some of Charlotte’s grandest properties, was ripe for restoration. 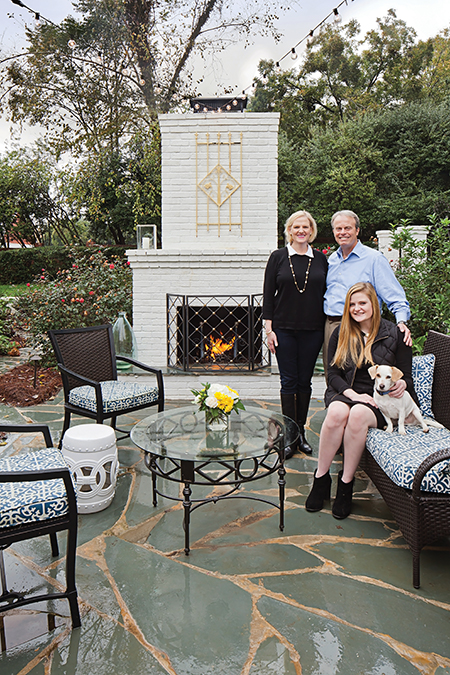 Melissa, Dan, daughter Caroline, and dog Rebel enjoy their patio in all seasons.

Since moving to Charlotte in 1990, Melissa, an executive with Bank of America, and her husband, Dan, a business owner, have been serial renovators. They’ve bought, fixed up, and then sold six homes in the Foxcroft, Cotswold, and Myers Park neighborhoods of Charlotte, all within about a five-mile radius. “It’s my creative outlet,” Melissa says. “Every few years, I get the itch to start over.”

But the Sharon Road property, which the Owenses bought soon after the estate sale, put their talents and fortitude to the test. There was a sagging ceiling in the kitchen, a result of water damage. Beams that held up that corner of the house were seriously deteriorated. And nearly every surface of the home needed attention, from the mantel and the tile around the fireplace to the floors. “We’ve bought a lot of houses,” Dan says. “This is the first that didn’t have hardwoods under the carpets.”

The Owenses were undaunted. “I love bringing something back to its former grandeur, particularly with this house,” says Melissa, who grew up in Lake City, South Carolina, a city in the center of the state between Columbia and Myrtle Beach. “I’m a Southern girl, and I loved all the Southern elements—the Georgian architecture, the white house and black shutters—you see a lot of that in the Lowcountry.” 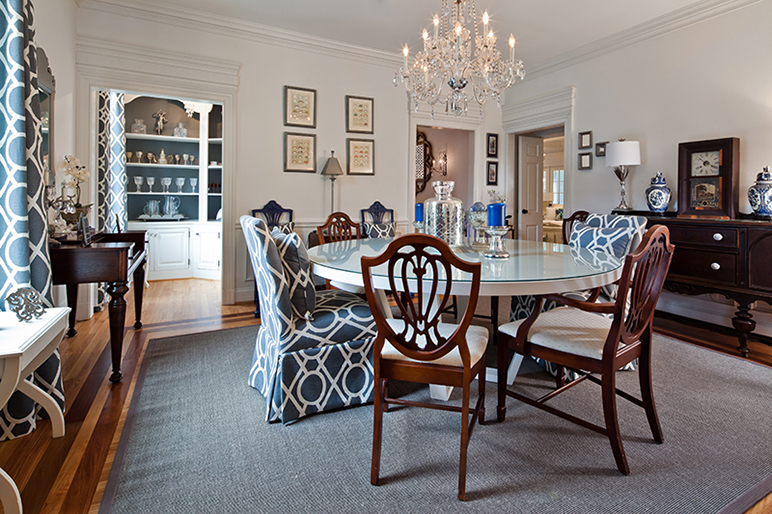 Unlike many houses built in the same time period, this Sharon Road home already had a spacious, open layout. The extended wall hides a staircase.

Though the house may have looked a little unloved when the Owenses bought it, that was far from the truth. Last purchased in 1976 by the late Jay W. Alexander, Jr. and his wife, June Childs Alexander, the house remained occupied by Mrs. Alexander until her death in 2012. The couple’s four children cherished the home, where they spent much of their youth. Descendants of the Alexanders often dropped by during the Owenses’ renovation to check on the transformation.

Aside from their opening up a section of the wall between the dining and living rooms and closing off one door to a Jack-and-Jill bathroom between the master and guest bedrooms, the home’s footprint stayed mostly intact. “In redoing older houses on TV shows, they often have to open walls,” Melissa says. “These rooms were built spacious. We didn’t have to do too much there.” 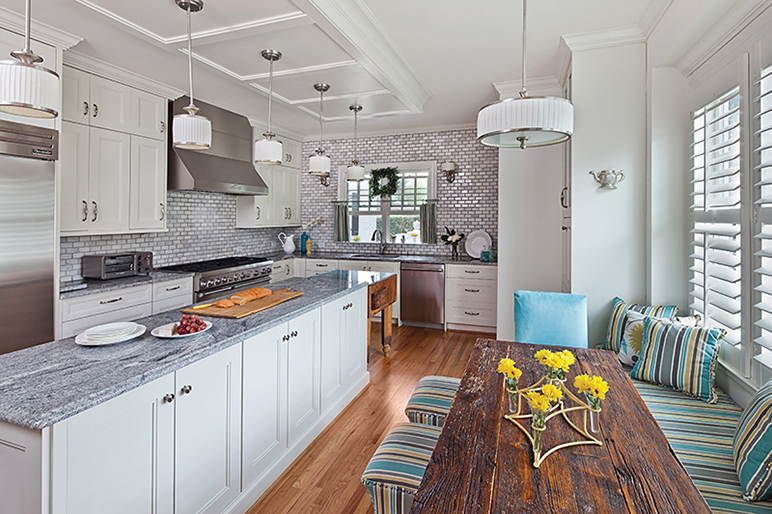 A sagging kitchen ceiling meant the room needed a lot of work. Melissa used subway tile and chrome fixtures to update the room.

A larger project was adding a staircase to an entertainment room they created in the roomy attic space above the front foyer, complete with a custom sound system—a place for Dan to watch TV and hang sports memorabilia. And they built a large patio adjacent to the living room on space once home to “overgrown shrubbery, a clothesline, and a drainage mess,” Melissa says.

The couple’s appetite for big projects is matched only by their knack for repurposing. Their new home has finials surrounding the driveway made from the columns of a Queens Road home. Hardwood floors came from a Foxcroft house, and slate for the porch roof was salvaged from a building in Old Salem. Dan even scored a pair of columns for the home’s outdoor storage building, echoing those on the home’s stately front entrance, on Craigslist. 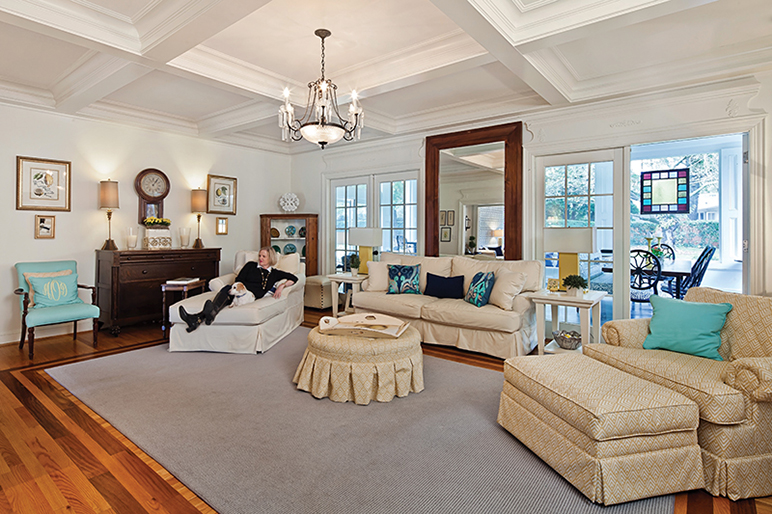 Melissa Owens relaxes in the family room. You’ll find touches of Tiffany blue, seen in the accent chair and throw pillows, throughout the house. 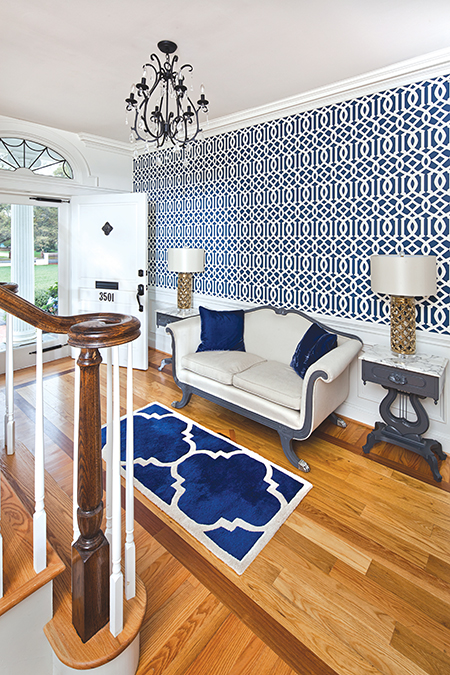 The Owenses extended a wall in the dining room in order to add a staircase in the foyer. The stairs lead to an upstairs entertainment room.

Melissa played musical chairs with the home’s original formal lighting fixtures—giving them an update in the process. She painted a small chandelier from the butler’s pantry in her signature Tiffany blue to hang in the bedroom of her teenage daughter, Caroline, and purchased a few contemporary lights to give the home a modern touch. “Most people would have ditched the old stuff and started over,” Dan says. “It’s not about being frugal; it’s more a healthy respect for older things and being able to recycle things that have character.”

Melissa takes a similar approach with furniture. She spray-painted the frame of an inherited Duncan Phyfe sofa a glossy dark gray and had it re-upholstered in a neutral linen. It now sits in the striking blue and white foyer. There are a few other family pieces, including the massive butcher block that Dan grew up with in Warren, Arkansas, now located in the bright, updated kitchen.

The Owenses also culled treasures from yard sales around town. The dining room table, the large mirror that anchors the living room, the breakfast room table, a corner cupboard and a multi-colored stained glass window, similar to one Dan kept from his childhood, all came from Saturday morning shopping expeditions.

These elements, along with Melissa’s formidable design eye, result in a pleasing alchemy of Southern tradition and contemporary style. “I wanted a modern edge this time, but with the old style that’s true to the house,” she says. The look is classic but comfortable—and fit for entertaining, which the Owenses do frequently.

Mrs. Alexander, the home’s former owner, was also known for her celebrations, as well as lavish holiday decorations. “She loved Christmas, and we found tons of decorations in the attic,” Melissa says. “The family even gave us some ornaments that we use on our tree. We always include Mrs. Alexander in our Christmas toasts.”

With the project almost complete, Melissa confesses to feeling a return of the familiar itch to renovate. But the couple has promised to wait until Caroline’s graduation in 2017 for the next big upheaval. After that, all bets are off.

This article appears in the January 2016 issue of Home + Garden.
Categories: Feature