WHEN CAROLYN VANDERBERG, then Carolyn Pou, was 10 years old, she took piano lessons from a woman who lived at The Carlton, a condominium complex on Queens Road. As Carolyn’s mother drove her to lessons one day, they noticed a familiar car on the side of the road. In it was the older sister of Carolyn’s friend, and the 16-year-old had run out of gas in her new car. Carolyn’s mom went to get gas in exchange for a promise that the car would never fall below a quarter-tank again. The girls waited with the car, and Carolyn couldn’t stop staring at the beautiful brick colonial home nearby.

Back in the car and en route to piano lessons, Carolyn turned to her mother.

The home went up for sale in 2006, and Carolyn and her husband, Matt, bought it. The following February, they moved in. Living in Carolyn’s dream home, which turned 100 years old this year, wasn’t always a dream, however. The house needed a lot of work. 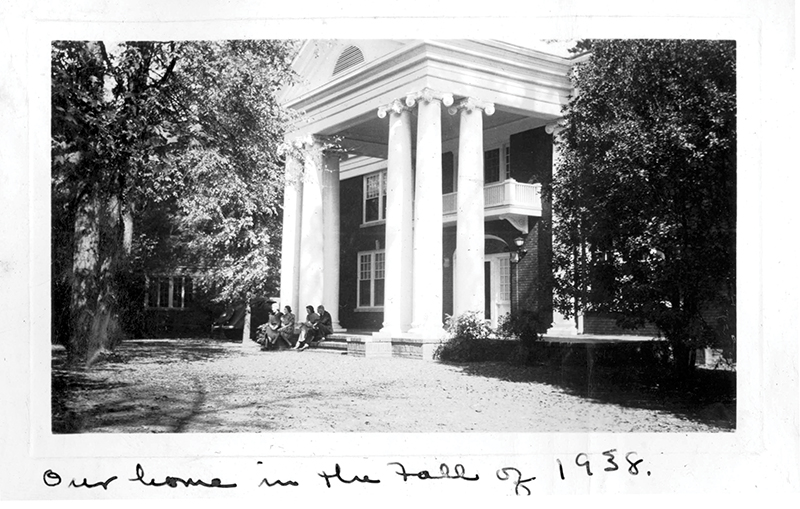 (Left) In 1938, the home belonged to the Snyder family, pictured here with extended family. 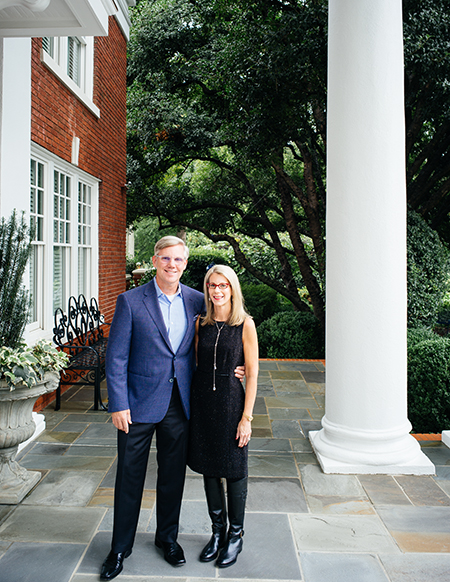 Matt and Carolyn Vanderberg purchased the home in 2006.

In the basement, tangles of wires accumulated over a century hung from the ceiling.

“There’s no way to describe how horrible it was,” Carolyn says. “The wires and the pipes—and it was dark and smelly. It was awful.”

There are still some wires bundled along the ceiling of the basement, but the dark and dankness have been replaced by the smell of a cedar-shelved, 1,500-bottle wine cellar.

The ground level exterior walls had no insulation, so insulation had to be pumped between them. There are still some spots that will need be insulated again.

“That’s why our tea olive tree is doing so well,” Matt jokes of the shrub along the side of their house, which has grown so large it looks like a tree. “It had 100 years of heating and cooling. … It’s like a greenhouse effect.” 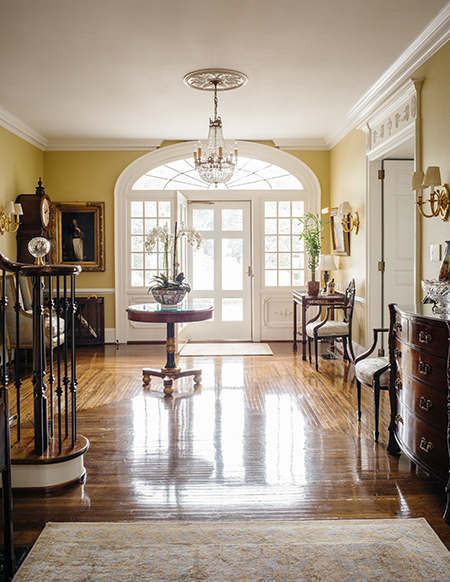 The original handrail in the home’s foyer needed to be stabilized, so the Vanderbergs brought in Southern Staircase to replace the balusters with scrolled metal ones.

And this was only before the Vanderbergs moved in.

Then there was the first flood, in 2008, when old piping for an upstairs bathroom burst, damaging the hardwood floors below. The same year, there was the 100-year-rain flood, during which water was knee-high in the basement and almost a foot high in the garage. The original wine cellar had to be redone, and everything inside of it thrown out due to possible groundwater contamination. They now have eight sump pumps in and around the house to keep it from flooding again, as well as a generator that can power the pumps in the event of an electrical outage.

“The only one we haven’t had is locusts,” Matt jokes. “We’ve suffered all the other biblical … disasters.”

The hundred-year-old house even caught fire once. A contractor soldering copper on a bay window accidentally sent the side of the house up in flames, then went running. Seven fire trucks with 22 firefighters zipped over. They had to punch holes in the guest bedroom, the floor in Matt’s bathroom, and the attic, afraid that the age of the house would cause it to burn quickly. Luckily, the fire started in a spot where Carolyn and Matt had repaired rotted wood under the window. 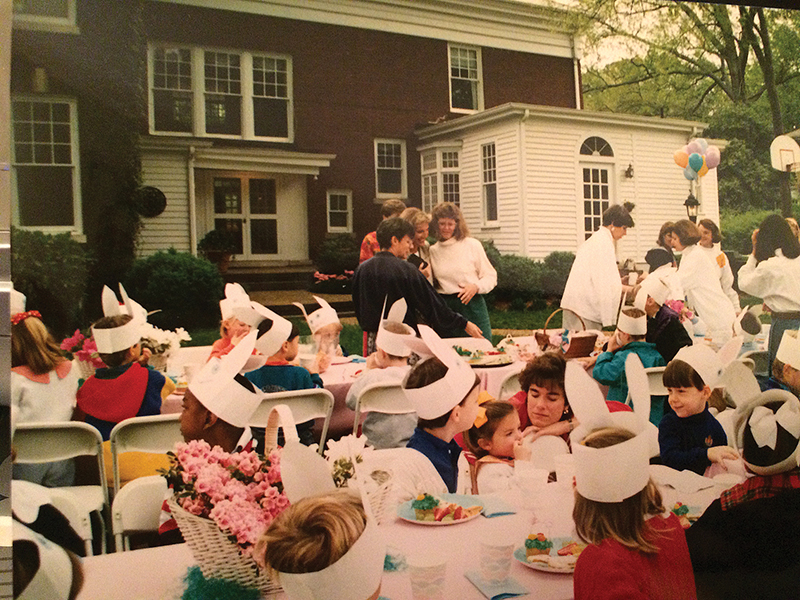 An Easter party (left) for Coleman Carter in the backyard before the home was expanded. 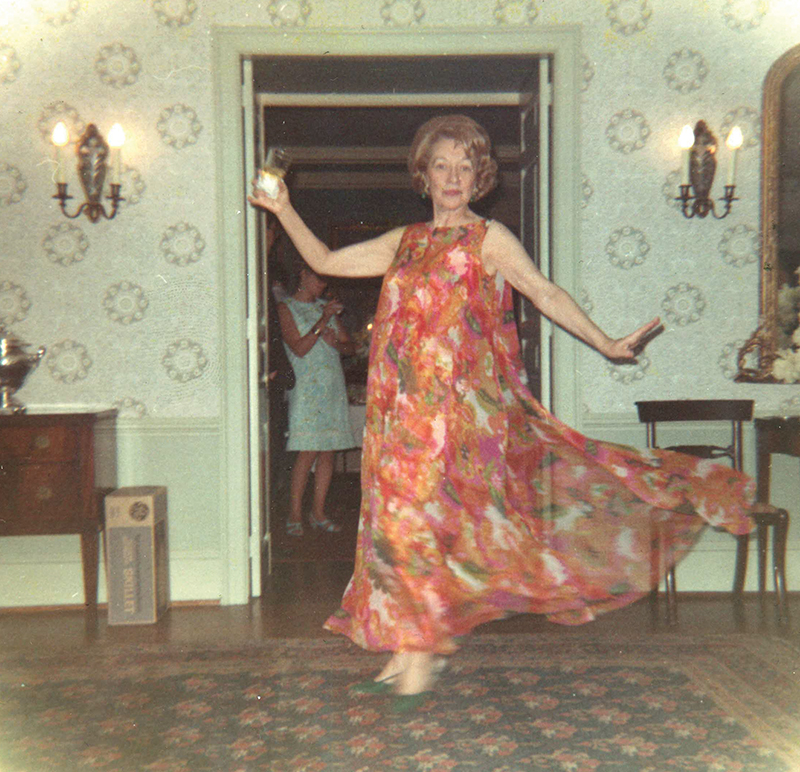 Christine Butler Snyder entertains guests in the foyer in front of the dining room in 1967. 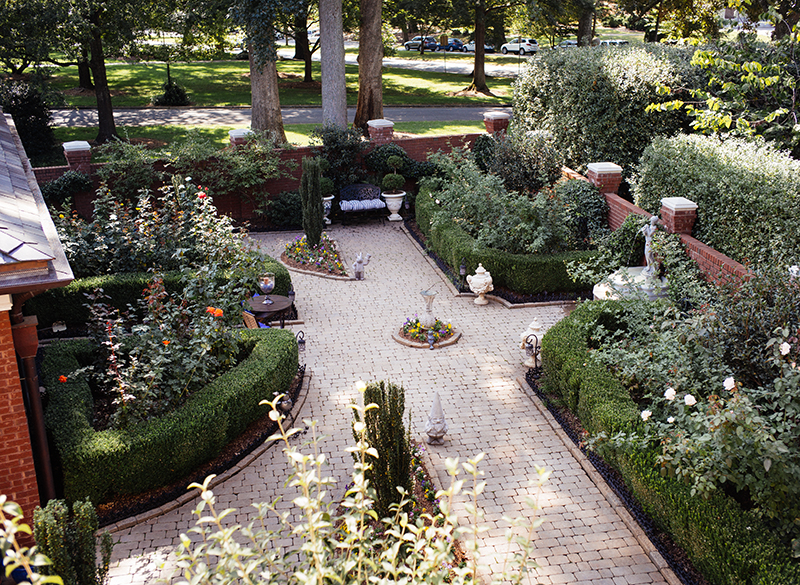 The Vanderbergs’ sense of humor resonates in the garden. Sophia, the fountain nymph, stands watch over Jerome the gnome and Hef, a figurine of a bunny with a top hat. The gardens were designed by Myron Greer. 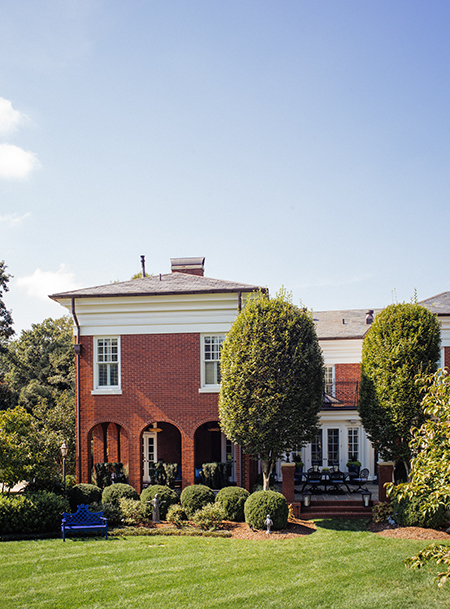 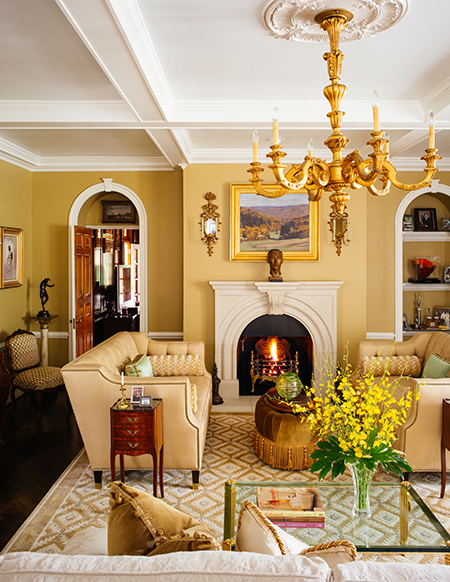 “Thank goodness it was that section, because they thought as soon as it gets to old wood, it would go right up,” Carolyn says.

On humid days, she adds, there’s still a hint of the smell from the fire.

Two lion statues—since replaced—were stolen from the front of the property. The Vanderbergs have also had two car accidents damage their fence—once when a drunk teenager turned the corner too quickly and flipped the car at least two times, eventually landing in a neighbors’ yard, and another when someone had a seizure while driving and hit the same wall.

But the Vanderbergs can only control so much, so they do what’s in their power to maintain the home’s history. There’s a strict no-shoes policy for guests in the house, an attempt to save the remaining original hardwood floors in the main entryway.

Despite all the troubles they’ve faced, Carolyn and Matt don’t regret buying this house. A doorway to nowhere holds the secrets of former owners, including the Snyder family that owned the Charlotte Coca-Cola plant. Matt even found a Coke bottle buried in the mud during one renovation that is so old, it reads “Patent pending.” They’ve added their own memories to it, dotting the house with mementos of family members: Matt’s grandfather’s military gear from when he flew as a Navy pilot in World War II; Carolyn’s mom’s golf trophies; needlepoint from Carolyn’s grandmother. A curio on the stairway landing holds the flight log of Matt’s grandfather and cameras from Carolyn’s family—years and years of memories for a home that’s already full of them.

There are some new additions since the Vanderbergs bought the home; they worked with Myron Greer to create classic gardens that would have fit in 1916, when the home was built.

They hired Richard Carnes to help the maintain the house. A new garage houses Matt’s classic car named Lolita, a 1965 Lincoln Continental convertible with suicide doors, and the modern comforts of a pool house and pool make time spent outside even more enjoyable.

Inside, though, Carolyn and Matt are doing their best to preserve Carolyn’s childhood dream house, making sure this 100-year-old home lives on in Charlotte.

“I kind of feel like a steward of history,” Matt says. “So much is going on with the way things are being torn down. If this got torn down, it could just be apartments.” 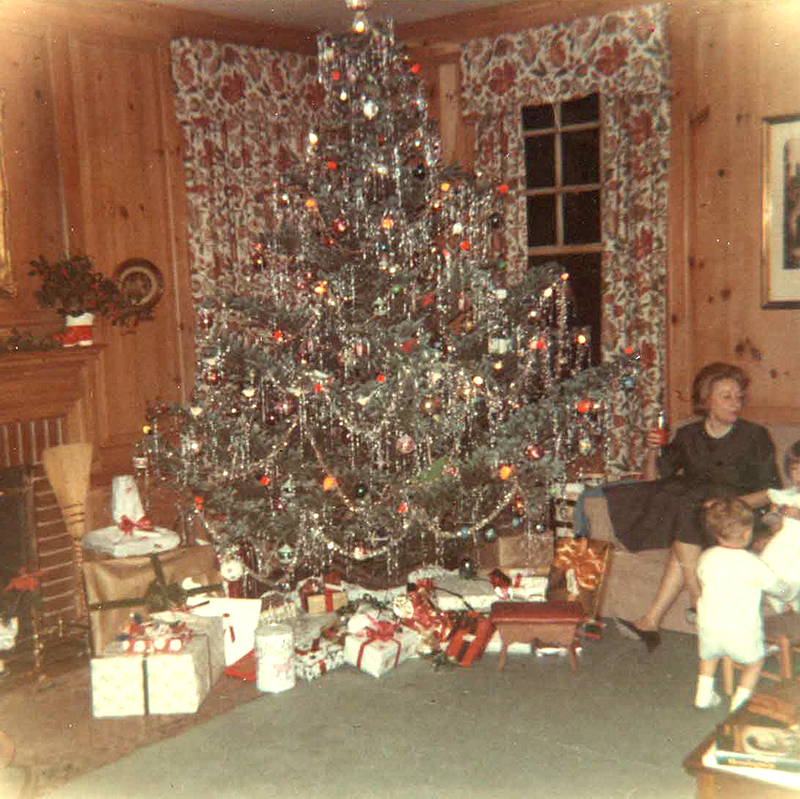 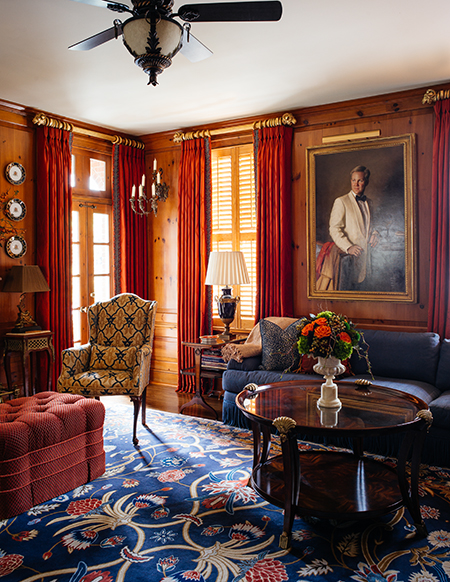 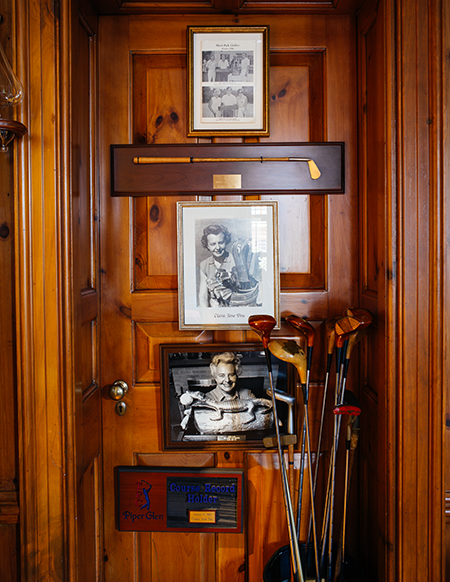 Top: The Snyder family in the paneled den decorated for the holidays in 1967, pictured above, compared to the room today. The portrait of Matt was painted by John Seibels Walker; there’s a matching one of Carolyn. Bottom: Carolyn Vanderberg’s mother, Clara Jane Mosack Pou, was a prominent golfer who won numerous club championships, including several at Myers Park Country Club. A nook in the den showcases her mother’s clubs and photographs.

This article appears in the January 2017 issue of Home + Garden.
Categories: Feature
Contest of the Month