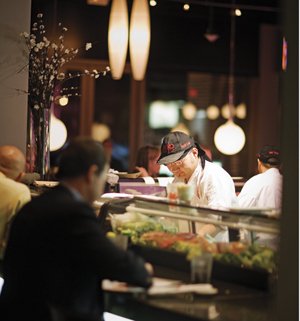 Anyone who's ever come across Nikko owner Joanna Nix knows that she is, well, uninhibited. But this? This is a surprise.
For ten years, the original South End location of Nikko was a cozy spot—no more than a dozen tables—known for good sushi and an owner who likes to wear a black cowboy hat and occasionally dance on the bar. Now, just across the alley, there's this new place Nix calls "Super Nikko." And it is indeed as if the old Nikko stepped into a phone booth, shed the clunky black glasses, put on a cape, and came back into the light to save the world.

Ten of the old Nikkos could fit into the new space. There are tables and booths as far as the eye can see, and the block-long sushi bar wraps around a corner. A glistening faux waterfall announces the hostess stand, which occupies prominent position in the large lobby/lounge, which is itself outfitted with black leather furniture, plenty of glass, and a high-test sound system.

This is no sushi factory, though. It's a beautiful place. It occupies a ground-floor space in South End's The Arlington, otherwise known as The Big Pink Building, and a long stretch of windows offers views of cars racing by on South Boulevard. Behind the bar, a panel of pulsing light changes colors according to Nix's whims. The most interesting accouterment: a giant tapestry with Nix's image on it in the back near the restrooms, which themselves are works of art (don't miss the sinks lined with river rocks).

The beautiful people have responded. Weekend waits stretch to an hour or more, and the lounge area is shoulder to shoulder with folks content to drink the night away. And, yes, Nix still does her thing, working the crowd with tambourine and feather boa, pushing sake bombs, dancing with patrons. At 10 p.m., the volume goes up on the techno music, and Super Nikko becomes Club Nikko. For Charlotteans accustomed to consuming Japanese cuisine in dowdy surroundings, it's an almost surreal experience, but surreal in a good way, if you're into scarfing sushi to a thumping bass line. 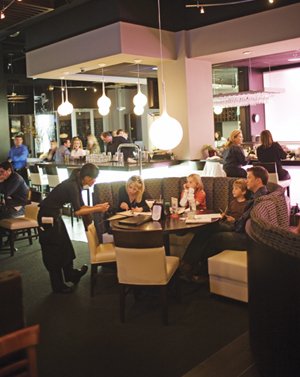 Oh yes, the sushi. Considering the scale of the place, I half expected the sushi to suffer. But it doesn't seem to have. There are all manner of selections among the maki rolls—including Joanna's Trust Me Roll, which features fish skin—and they're tightly rolled and well presented. Nikko also has twenty-six selections of nigiri, which are typically very good and fresh here. The dinner menu also boasts a very long list of appetizers—call them Japanese tapas. Dumplings—beef or pork, both spicy—are excellent. Japanese-style entrées include meat-based teriyaki dinners, bento boxes, and two high-end signature items (barbecue beef short ribs and char-broiled Chilean sea bass).

All this high style comes at a price—entrées run into the high twenties, and sushi is about a dollar or two more than other places around town. Then again, other places don't have pulsing lights, a big-city vibe, and sushi this good. And they don't have Joanna Nix.