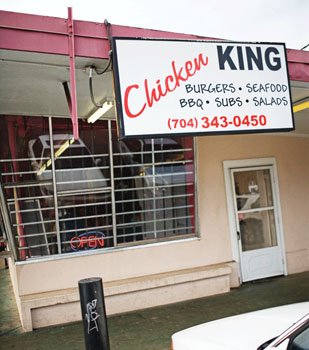 Steve Koutroulakis came over from Greece in 1977, worked in restaurants, then finally bought his own place, Chicken King.

I had been driving by the Chicken King at Plaza and Parkwood for years and never stopped. Shame on me. It's because it looks a little scary, with bars on the windows, and it's in an awkward location, so that if you pull in you'll have a difficult time getting out. But I always see people coming in and leaving with bags of food. It seems to do good business, mostly foot traffic, from the adjoining Belmont and Villa Heights neighborhoods. A friend told me it was worth a visit, so I checked it out.

It's small, takeout only. The walls are pink. Behind the counter stands a guy in a camo Fidel Castro hat with two days' growth on his face. He's Steve Koutroulakis, and he owns the place. He came to Charlotte in 1977 on a tourist visa, fell in love, married, and has always worked in restaurants. "In the 1970s Greeks were like the Mexicans are today," he tells me. "We did all the jobs Americans didn't want to do. I didn't have any skills, didn't speak the language, so I did restaurant work: washed dishes and cleaned up. Now I own one."

Behind him two Hispanic guys efficiently work the grill. Chicken King sells a lot of fish. "People from the neighborhood say, ‘We just love your fish,' " Steve says. The fish sandwich special is three pieces of perch breaded and fried on a large bun with slaw and tartar sauce. It comes with so many big fat fries that I couldn't get the box closed. It's an excellent sandwich for $4.50. It could easily feed two people. That's a great dive—the food is good, plentiful, and cheap. The pork chop dinner special is excellent, too, and so is the Charlotte-style hot dog, which is deep-fried and covered with mustard, onions, coleslaw, and chili. While I waited for my food (which came fast), probably nine people came through the door. Most had called in their orders for pickup. They chatted with Steve while they squirted hot sauce and ketchup all over their food. "Even though we're in a rough neighborhood, if I was kicked out of my house at 3 a.m.," Steve says, "I'd come down here. It's safe. People don't bother me, because they like my food."