In Elizabeth, this family of five collects artwork, antiques, and memorable moments

Holly and Bryan Adams declared the Elizabeth neighborhood home 11 years ago. Holly, a New Jersey native, moved to Charlotte in 1996, and Bryan, who had never lived anywhere for more than three years, came to Charlotte a year later. They lived in separate places in the University area, but when they decided to get married they began looking for a permanent neighborhood that suited their personalities. Their realtor brought them to Lamar Avenue to show them a house across the street and a few lots down from their current home. The house was out of their price range and about to go under contract, but they liked the neighborhood. 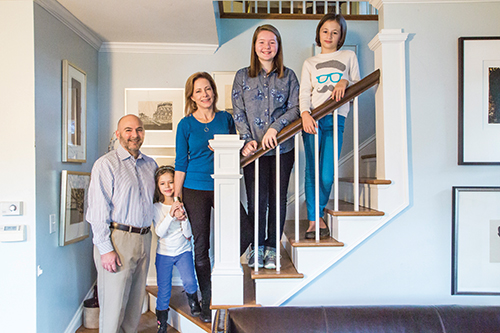 Bryan and Holly Adams have a home full of family with three daughters, Emmy, Mia, and Molly. It’s also filled with eclectic furniture and meaningful artwork.

“Elizabeth felt more like us,” Holly says. “It has a mix of people and ages … all walks of life.”

They soon learned that this 1930s two-story home with big windows and plenty of room to grow their family was on the market. They went to an open house on a Saturday and immediately made an offer. That fall, the couple got married at The Independence Rosegarden, within walking distance of their new home. Then the newlyweds settled in to renovate and curate their space. This past fall, their home was one of five houses on the Elizabeth Home & Garden Tour. The couple’s first project was the kitchen. The tight room, about 13 feet square, was red, white, and black with a Betty Boop theme. Holly and Bryan gutted the space and installed neutral cabinets, Brazilian cherry floors, a farmhouse sink, and a Viking range. A butcher block Bryan found on eBay creates a compact workspace in the kitchen’s center and allows for foot traffic on all sides. 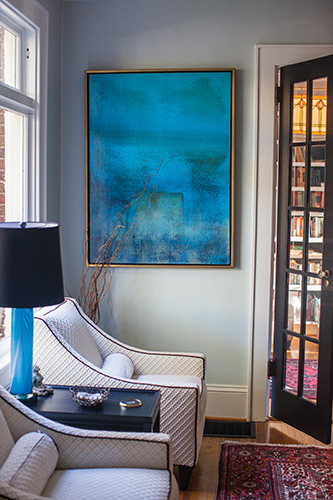 The woodcuts on the stairs are by Bryan’s mother, and N.C. artist Scott Upton painted the blue abstract.

Ease of movement is important for this family of five. Bryan and Holly have three daughters, ages 5, 10, and 13. Mealtime and the majority of family time is spent in the large back room that stretches the entire width of the house. One side functions as an informal dining area. A light fixture made of repurposed mattress springs hangs above the table where the family eats together almost every night.

Holly jokes that the home is like a mullet hairstyle, business in the front and party in the back. The front of the home does feel more formal. The oversize front door and large windows have the original wavy glass. Bryan and Holly restored the wood-burning fireplace, so it’s now functional. The white-painted bricks offset the fireplace from the pale blue walls. North Carolina artist Scott Upton painted the abstract piece hanging above the fireplace.

“We buy what we like and try to make it work,” Holly says. “Bryan knows right away if he likes something or not.”

Bryan, whose mother is an artist, taught Holly to purchase things that evoke feelings instead of searching for things that match the decor or fit a specific spot. This approach has led the couple to collect a house full of items with independent stories and memories that when put together tell the story of Bryan and Holly. For example, Bryan purchased the front room’s tabletop sculpture of a swimming pool—with blue, wavy glass that appears to move when the light strikes it—on their 10th-anniversary trip to Paris. 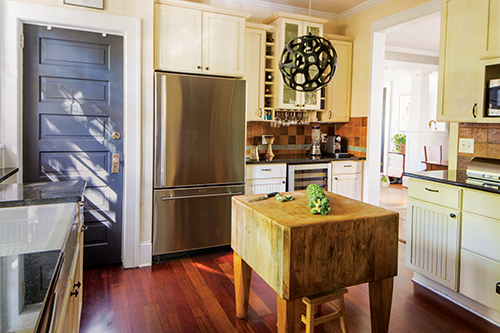 The kitchen is small but functional. Tall ceilings allow for large cabinets, and the butcher block creates a compact work station.

Just behind the front room, two white columns frame the entrance to the dining room. The textured blue-and-silver Schumacher wallpaper is one of Holly’s favorite design choices. The dining room table is surrounded by chairs with seats covered in a colorful Schumacher fabric and a black-and-white animal-print bench. Bryan picked out the beaded chandelier at City Supply Co. His mother painted the still life of flowers that hangs to the left of the dining room entrance.

A collection of her woodcuts leads up the staircase to the four upstairs bedrooms. The oldest girls’ rooms have lofted beds with desks underneath to maximize space. The youngest has two twin beds from Pottery Barn, which resemble antique, wrought iron frames. 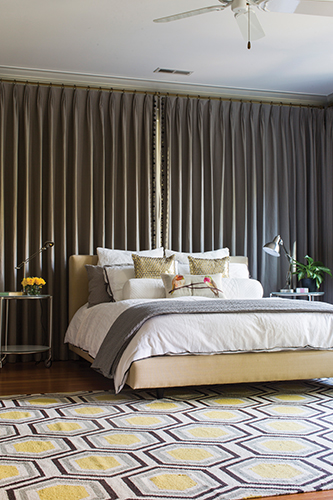 Holly worked with Beth Keim of Lucy and Company to redesign the upstairs master suite, which has a modern feel.

A modern, curved wall, added before Bryan and Holly purchased the house, leads into the master bedroom. Holly worked with Beth Keim at Lucy and Company to redecorate the bedroom and bathroom. A warm gray wall color with white trim gives the room an updated feel, setting it apart from the rest of the house and making it seem private and special. A second-story screened-in porch lies off the back of the suite.

“We’ve made it our homey spot,” Holly says.

The family spends as much time together outside as possible. Holly enjoys working outdoors. She’s trimmed back or cleared away many of the invasive plants that once overran the property, such as ivy, bamboo, and wisteria. When they purchased the place, the backyard had some form and a small deck. But Holly has created winding paths; planted a variety of annuals, perennials, and shrubs; and worked with a landscape company to install an outdoor fireplace.

“It’s been trial and error,” she says. “I didn’t know how much sun we got back here, so I planted one of everything and learned along the way.”

A community group of handymen, who call themselves The Woodpeckers, fixed up the property’s existing garden shed. The backyard is an ideal home for the family’s five resident chickens. They roam around, scratching and pecking and occasionally stripping Holly’s plants of a few leaves. Their upscale coop came from Urban Coop Company, and the family named it The Egg Plant.

Holly says her daughters have asked if they can grow up in this house and not have to move. She and Bryan think that sounds like a pretty good plan. 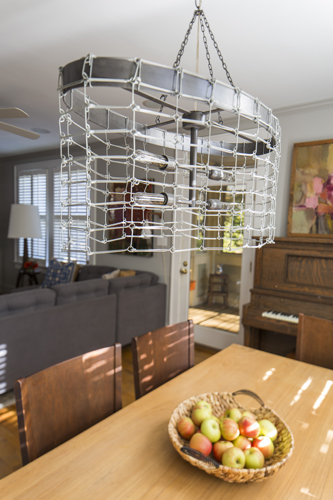 The unconventional light fixture is made from repurposed mattress springs. 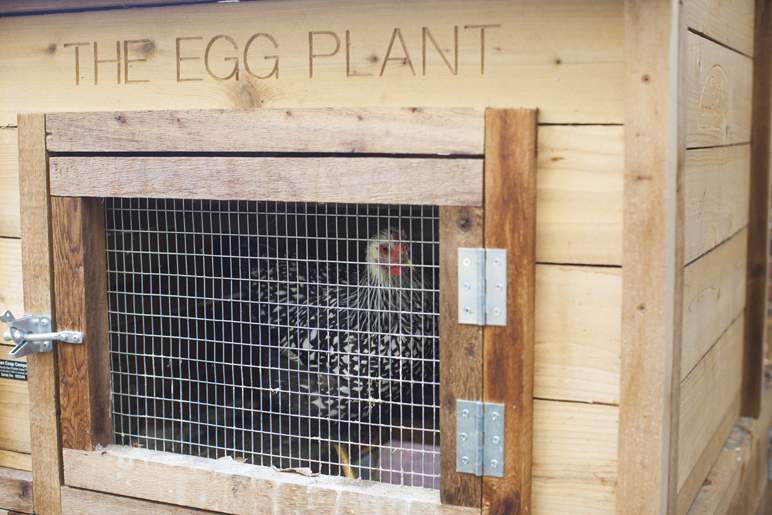 The Adams’ five chickens live in an upscale coop named The Egg Plant. 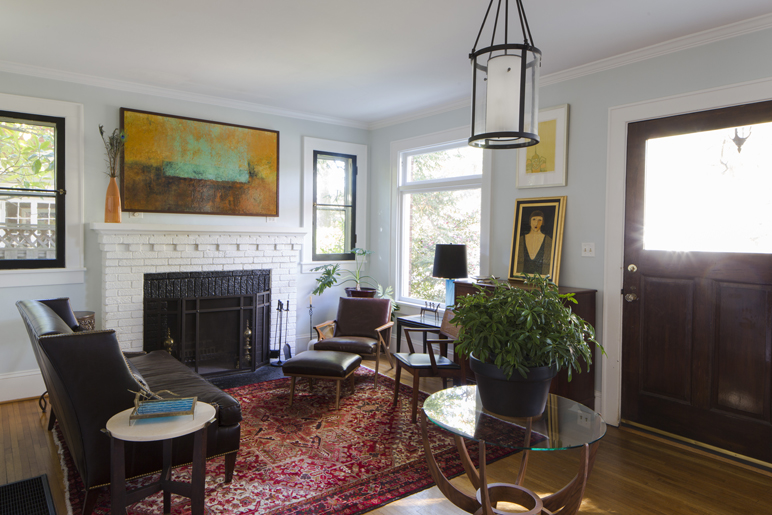 Abstract painting above the fireplace is by Scott Upton. 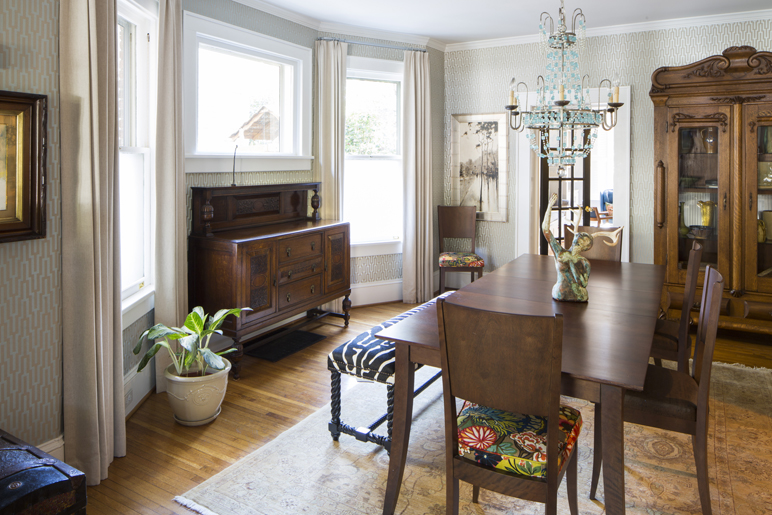 Bryan picked out the beaded chandelier above the dining room table at City Supply Co. 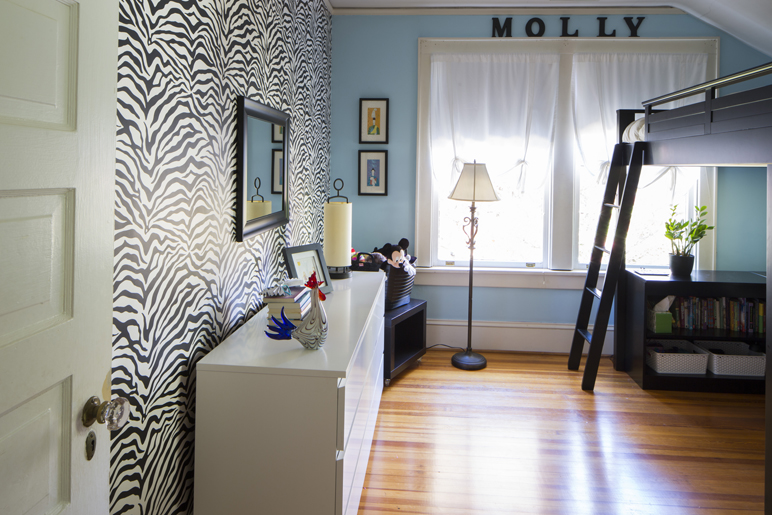 The oldest girls’ rooms have lofted beds with desks underneath to maximize space. 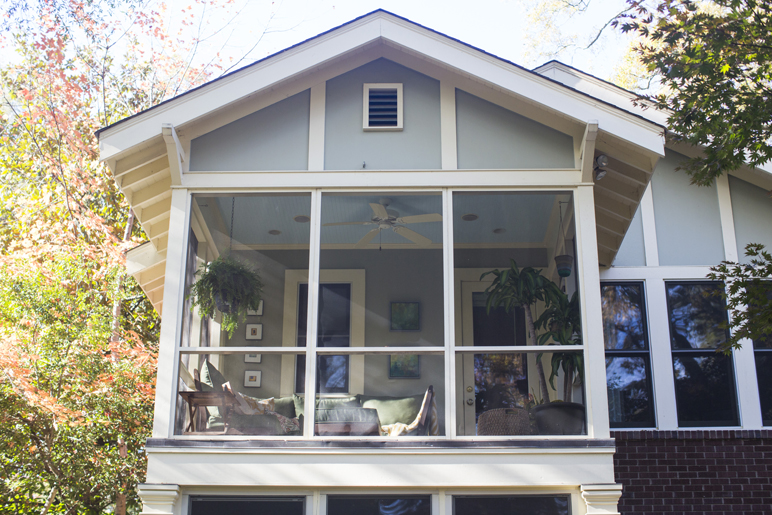 A second-story screened-in porch lies off the back of the master suite. 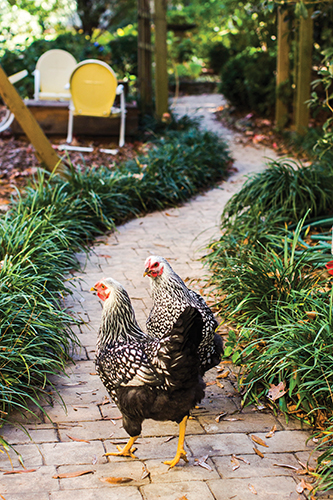 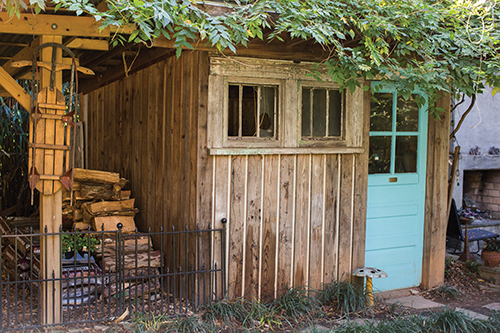 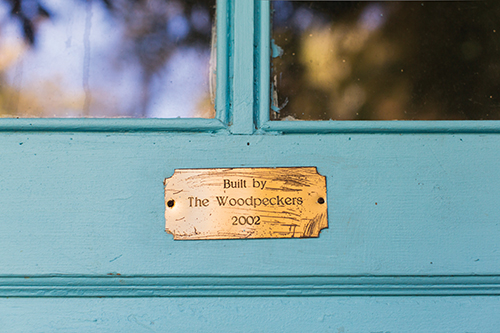 The Adams’ fun backyard has five chickens and a garden shed restored by a group of community handymen called The Woodpeckers.

This article appears in the December 2014 issue of Home + Garden.