What riding the bus taught me

The route was eight miles. Most days, the bus ride from my house in Waverly Hall to First Ward Elementary School took about an hour, as we picked up middle-class kids from southeast neighborhoods like Medearis and Stonehaven and bumped down Monroe Road headed for downtown.

In one year of school, I traveled 2,880 miles on a school bus—that’s more than the distance from Charlotte to San Francisco.

Before 6 a.m., the dark is different, to a kid anyway. It feels like the middle of the night, the silence and stillness. Most mornings, I’d slam my Garfield alarm clock off at 5:30, stumble around and fall into my clothes, before rushing out the door with a Pop-Tart. Sometimes I was so tired, I forgot to brush my teeth.

Then, I’d stand at the corner of Regency Drive and Morganford Road and wait, in the heat or the cold or the rain.

On especially cold mornings, as soon as I hopped up the bus steps—whoosh!—the temperature change to the warm bus would fog up my glasses, so I couldn’t see to find my seat.

School bus rides are jerky, and I learned very young that I suffer from motion sickness. The early mornings, weird breakfasts (or no breakfast), and the bumping all made me feel sick. I was so nauseated one morning that I threw up all over the brown vinyl seatback in front of me. Erin, my neighborhood friend and seatmate that day, jumped across the aisle. She screamed. “I’m really sorry,” I said. Then I sat there, with the mess, until we made it downtown. Erin and I are still friends, and through college at Chapel Hill, when people asked us how we became friends, Erin told them: “She threw up on me on the bus.” 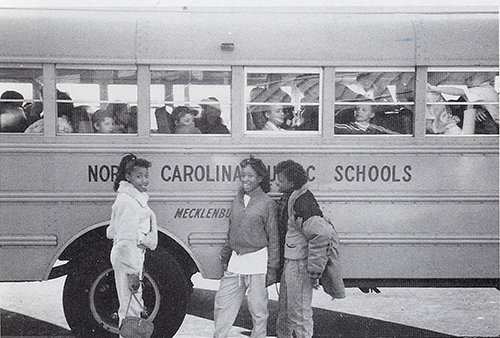 Students chat outside the bus in the First Ward parking lot in the early 1990s.

I didn’t know that hour-long bus rides weren’t normal. I didn’t know I was part of a landmark social experiment designed to help me meet people who didn’t look like me.

I just thought my school was really far away. I imagine a lot of kids felt that way.

In 1991, more than 2,500 black students in Charlotte-Mecklenburg Schools rode buses to schools outside of their neighborhoods. That same year, 293 white kids were bused. I was one of those kids. I was bused to First Ward from fourth to sixth grades, 1989 to 1992.

My mom hated sending me so far. “It was just so inconvenient,” she tells me now. “The worst was when your brother missed the bus. I had to leave work off Tyvola Road, go home, get him, drive all the way downtown to First Ward, then all the way back to work.” She worked at a Greyhound call center and lost an hour’s pay that day. She charged my brother the money. “The next time he missed the bus, he didn’t call,” she says. “He just stayed home.” Parent-teacher conferences, doctor checkups, and teeth cleanings created the same inconveniences: long drives, gas money spent, lost pay. Those last two were especially salient because I knew we didn’t have a lot of money.

But everything is relative. At school, I met kids who walked from the two neighboring housings projects, Earle Village and Piedmont Courts. A girl on the bus told me that poor people lived there. Her dad owned a laundromat off Monroe. “See that store? Duds ’n Suds?” she asked me as we drove past it on our way to school. “That’s our store. That’s my dad’s store. Duds ’n Suds. We own that.” She was a little hyper. Some mornings, she made a big production when the bus would pass the housing projects, slinking down so her legs were fully under the seat in front of us, her head below the bus window. “You better duck!” she’d tell me. “You don’t want to get shot through the window!” I didn’t understand why someone would shoot at anything, let alone a school bus, but she seemed certain, so when we passed Earle Village, I ducked.

In the First Ward cafeteria one day, two black girls my age tried to choke each other, yanking each other’s hair and falling to the ground in a violent tussle. Fights happened once in a while. And they were scary. After the fight ended, I guessed at the reasons for the girls’ anger: Maybe they didn’t have compassionate moms like mine who spoke to them in French and sang them to sleep. Or dads with master’s degrees who read to them from Childcraft encyclopedia pages before bed. As time went on, I saw similarities in difference. I started developing perspective.

I made friends with girls who wore long Lee Press-On Nails, who wanted to brush and braid my hair ("Your hair feels like a doll’s!"), the same girls who taught me about weaves and double dutch. I became pretty good at double dutch because I’d practice back home in my neighborhood. I met boys I thought were cute who looked nothing like me. One of my brother’s best friends during those years lived in Cherry, the historically black neighborhood in midtown.

Chorus was my favorite class. Ms. Brewer, the music teacher, was a middle-aged black woman, quirky as they come. She wore toe rings and thick, patterned skirts that looked like rugs. She had a huge laugh. She was one of the most interesting people I’d ever met, and we both loved music. She was also the first person who ever addressed me by my skin color.

“Hey, you, little white girl,” she’d say. “Good job. Pick up a gold slip!” Gold slips were little square pieces of yellow paper, hand-cut, like homemade Post-its without the sticky strip. We earned them whenever we did something good. At the end of each week, the principal drew one gold slip from a box and announced the winner over the loud speaker. Ms. Brewer gave me a lot of gold slips, and one week, when I had really racked them up, the principal called my name. I won a black basketball with a red Jumpman logo and replica Michael Jordan autograph. I was happy Ms. Brewer liked me. To her, I was different.

If I hadn’t been bused out of my neighborhood, I’m not sure I’d have met someone like Ms. Brewer, at least not at that young age. I have smart friends and family members who grew up in homogenized school districts and neighborhoods, and I’m not sure they met someone from a different race or socioeconomic group until college, if then.

Diversity nudges you out of your comfort zone and slaps you with a new reality. Differences provoke discussion, and studies show that culturally diverse social networks promote creativity. To this day, I’m not afraid of meeting new people from different cultures—in fact, I love it. Instinctively, I look for similarities in people from different backgrounds and countries. My friends are diverse racially and socioeconomically, and I have a hard time throwing parties because I’m never sure if everyone will talk or get along. I’ve traveled to far-off places like Istanbul by myself, and I lived in London alone. I don’t know if I’m this way because of First Ward, but I’m sure my experiences at the school play a role in it.

Riding the bus wasn’t fun. It wasn’t easy. Drivers and extra maintenance and gas cost more money. Environmentally, it wasn’t responsible. It was inconvenient for my parents and for me. I threw up on Erin. But I wouldn’t change the perspective I gained from being bused to First Ward.

Besides, on the really cold mornings, when I’d hop on the bus and my glasses would fog up, all I had to do was wipe them off on my shirt, and then I could see.

Virginia Brown is an associate editor for this magazine. Reach her at virginia.brown@charlottemagazine.com or on Twitter: @virginiarbrown.

This article appears in the September 2014 issue of Charlotte magazine.
Contest of the Month