The Mandrake: Searching for Staying Power

IT WASN'T THE WAY any restaurant would want to start. The uptown spot that formerly housed 3 Trade reopened as The Mandrake on the first day of Charlotte Restaurant Week, one of the most hectic times for restaurant workers—let alone ones who were working with a new concept. Angry reviewers turned to Yelp. Owner Jose Garcia went to work turning around diners’ opinions. 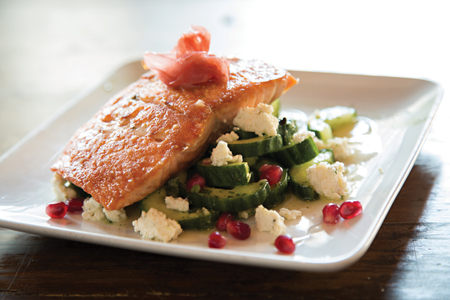 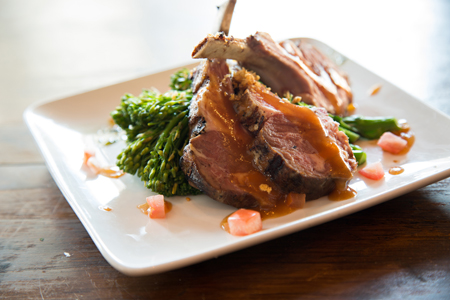 “We weren’t ready. And it was too late,” Garcia says of his decision to participate in Queen’s Feast. “We did the best we could, but our biggest flaw was customer service. And that’s number one—even before food, when you walk in, you need someone to greet you warmly and receive you. How you approach a table, that’s even before you get to the meal. That’s just basics.”

Garcia took the issues personally, and began fixing the problems he’d seen that first week. He brought in a new general manager, Andrew English. English moved over from 1900 Mexican Grill, a restaurant Garcia continues to run for his parents, who own the Elizabeth Avenue and Park Road eateries. As soon as the front of the house was running smoothly, Garcia began planning changes to the restaurant’s visual appeal. When he bought the restaurant in November, he made some changes to the bar, but thought the rest of the interior was good enough. After he was ready to improve the design, he called Brent Baronofsky, who designed 1900 Mexican and a few other restaurants in town—including Cowfish Sushi and Burger Bar and Good Food on Montford. Replacing chairs, adding brick accent walls, and installing new lighting were first on the list. Giving attention to the patio also became a priority, as Garcia started dreaming up a bistro-style space.

“What I have in mind would be perfect—we have the potential to have the best patio in uptown,” Garcia says.

The back of the house needed little work. Chef Travis Garrett stayed on from the previous iterations of the restaurant on the corner of Trade and Mint streets. He created an almost entirely new menu this time, leaving little more than flatbreads from the 3 Trade menu.

Though the restaurant is branded as a small plates establishment, the tapas menu portions are much larger than you’d see at most. The honey Brie en croute, a generous round of Brie baked into pastry crust, is a hearty serving that can easily feed four. The braised beef cheeks is so tender, it falls apart as you try to pick it up with your fork, and the semi-sweet glaze pairs nicely with the acidic cabbage and cucumber kimchi alongside it. The soy-glazed duck breast with confit duck spring rolls is another kind of tender; not the fall-apart kind, but the kind that lets you forget about chewing and enjoy the flavors. Plated with the spring rolls, which bring a crunch to the dish, as well as bok choy, the serving seems more like a small entrée than tapas.

The menu spans everything from a variety of flatbreads to sushi. A standout is the pretzel bites and IPA beer cheese, made with NoDa Brewing Company’s Hop, Drop ’n Roll. The cheese is creamy and rich, and when paired with the pretzel pieces, it tastes like the ballpark in the summertime.

But don’t fall in love with anything on the menu: Garcia says it will be constantly evolving, much like the rest of The Mandrake. And soon, he hopes to show that the restaurant can do what the last three establishments in this spot—3 Trade, Threes, and Press Wine Bar—couldn’t: stay open, and gain a following.

This article appears in the April 2015 issue of Charlotte magazine.
Categories: Feature, Food + Drink
Contest of the Month