After a quarter-century with grass fields, the venue goes synthetic—material with a long and consequential history that started in North Carolina

By the time you read this, the grass field at Bank of America Stadium—a consistent feature since the stadium opened in 1996—should be long gone. Carolina Panthers owner David Tepper and his organization, Tepper Sports & Entertainment, decided this spring to replace the natural surface with synthetic FieldTurf, which five other NFL stadiums use.

The main reason: cost. Grass fields are far more difficult and expensive to maintain. Under Tepper’s ownership, the stadium will host not only the Panthers and at least three college football games per season but Major League Soccer—whose new Charlotte MLS team Tepper also owns—plus high school games and concerts. The new field is part of a $50 million stadium renovation for soccer, paid for equally by Tepper Sports and the city. “With two major professional sports franchises using Bank of America Stadium, and more events upcoming, having a natural grass surface is going to be a heavy lift,” Tepper Sports Vice President and Chief Operating Officer Mark Hart said in April. “We believe a synthetic surface provides the best solution.”

If you’re a casual sports fan, this might seem like an insignificant switch. You care about the games. What difference does it make what kind of field they’re played on? But teams and their players care—a lot—and fake grass has a six-decade history that contains surprises for all but the most turf-obsessed: a scientist in Raleigh who led the team that invented it; some truly dreadful injuries; things called “rubber crumbs”; and, in Charlotte’s case, a uniquely turf-related exercise in recycling. Let’s run some sprints. 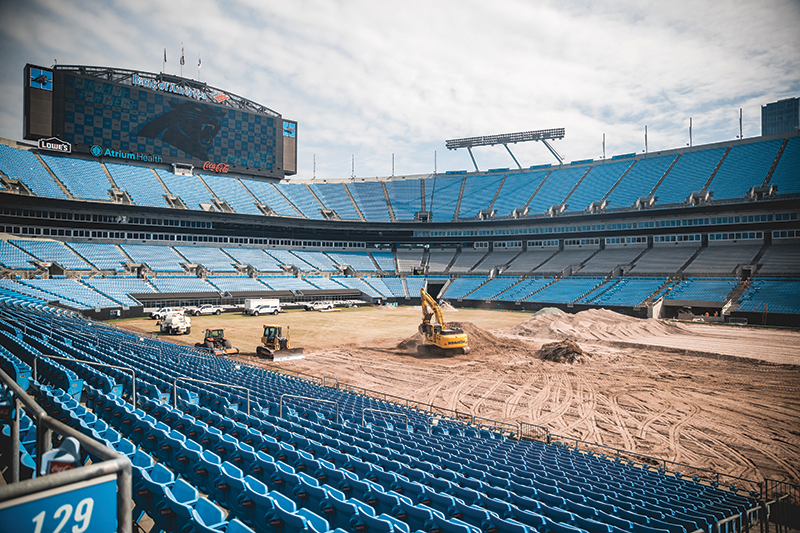 Athletes have trod on natural grass at Bank of America Stadium since it opened in 1996. Crews began to remove it in May for a new FieldTurf surface. Courtesy photo.

In spring, when Tepper Sports was ready to make the change, the stadium’s head groundskeeper, Tom Vaughan, reached out to the Mecklenburg County Park and Recreation Department and its director, Lee Jones. “We were contacted by the Panthers,” Jones says in May, “who said, ‘We’ve got all this dirt. Can you use it?’”

They could. Over the summer, crews moved 300 truckloads—4,000 cubic yards—of turf millings and root zone sand to six Park and Rec properties: Winget, Reedy Creek, and Veterans parks, plus the First Tee of Pineville golf driving range, Ramblewood Soccer Complex, and Sportsplex at Matthews. The old stadium turf will improve some old fields that “are a little bit worn down,” Jones says, and level or crown some uneven areas for better drainage. “And it’s top-quality soil,” says Jones, who’s worked for Park and Rec since 2004. “If you’ve ever been to that stadium, you know how beautiful that field is.”

Jones has been numerous times over 17 years, and the sentimental side of him will always prefer grass. His practical side understands the switch, and if it means beautifully maintained, donated turf for his department, he’s willing to cast sentiment aside. “Being a Panthers fan, I mean, grass is great, but when it’s wet and muddy, it’s wet and muddy, and that influences play,” he says. “With the synthetic turf they have now, you can get a lot better control, and you don’t worry about people getting friction burns and things along those lines.”

Perhaps it was meant to be. The Panthers and Park and Rec have worked together on other projects, and a former Park and Rec employee works for the Panthers as director of community relations. His name? Riley Fields.

Until the late 1990s, artificial turf fields were essentially nylon fibers over a layer of foam rubber over concrete, which led to severe lower-body injuries and cumulative damage to ankles and knees among players, especially in football, even when they avoided injury. The worst turf-related injury happened in 1993, when Chicago Bears receiver Wendell Davis ruptured both patella tendons on the field at Veterans Stadium in Philadelphia. “The way I moved that day, I think my injury could have happened on grass,” Davis, who never played again, later told Sports Illustrated. “But I will say that was a very hard surface. No cushion at all.”

Davis’ injury helped push manufacturers like FieldTurf, the company that manufactures the new Bank of America Stadium surface, to develop more advanced systems, generally referred to as “third-generation” fields. The fibers are softer, more like grass, and rest atop sand and small rubber pellets—“rubber crumbs”—that help with drainage and provide a softer cushion that curbs the risk of injury.

The fields are easier to maintain, too, which would prevent a repeat of Bank of America Stadium’s most embarrassing moment: On Sept. 30, 2001, when it was still called Ericsson Stadium, large chunks of the grass field came up during the Panthers’ game against the Green Bay Packers. The culprit turned out to be an overly thin, sand-based sod that failed to grow in cooler-than-average weather that September. It didn’t help that the Panthers lost, 28-7, en route to a 1-15 season, their worst ever.

It’s odd that the Carolinas’ only stadium for professional football took so long to install artificial turf, considering the stuff was developed nearly 60 years ago and just a two-and-a-half-hour drive to the east.

The Research Triangle Park in Raleigh was founded in 1959. A year later, the Alabama-based synthetic fiber manufacturer Chemstrand moved its research operations to the RTP and became the park’s first corporate tenant. One of the company officials who led the move was its vice president of new product research, Dr. David Webb Chaney.

Chaney worked in textiles, specifically synthetic fibers; he’d helped develop nylon parachute cords during World War II. During the next war, in Korea, military officers noticed that troops from the rapidly growing postwar cities seemed to be less physically fit than their counterparts from the farm. They and others thought more durable playing surfaces in city playgrounds and schoolyards might help. In 1962, the Ford Foundation offered money for research on synthetic grass to use on urban playing fields. Two years later, a Chaney-led Chemstrand team developed ChemGrass, the first artificial turf, which was installed at a private school in Providence, Rhode Island. 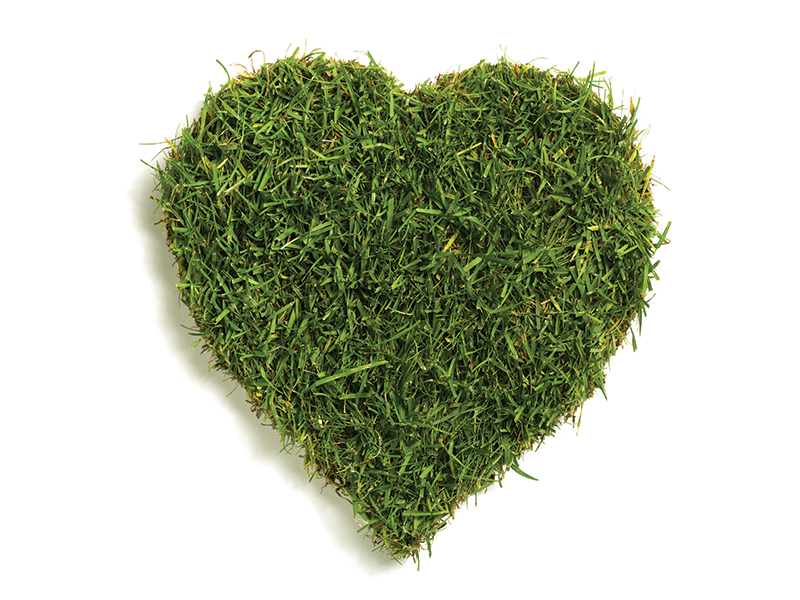 But it never took root (sorry) in city centers. It was too expensive. Entities like professional sports teams had more money. In 1965, the city of Houston unveiled another technological marvel of the Space Age: the Harris County Domed Stadium, the first of its kind in the world. Houston had a Major League Baseball team, the Colt .45s, that would play there. Did we mention space? What else was in Houston? NASA. The Colt .45s were renamed the Astros. The stadium was renamed the Astrodome. Play ball.

Except … the new dome had a glass roof, which admitted sunlight for the natural-grass field. Outfielders would lose sight of fly balls in the glare. Stadium management painted it over, which meant they needed a replacement for the grass. They turned to Chemstrand and ChemGrass, which was installed in 1966 and quickly acquired a new brand name: AstroTurf.

SI later referred to Chaney as the man “responsible for indoor major league baseball and millions of welcome mats.” But AstroTurf wasn’t an accomplishment he discussed much, his son, Dr. Steve Chaney of Chapel Hill, tells me by phone in May. “He was somebody I always really admired because he was obviously very smart, but he was gentle. He wasn’t arrogant,” says Steve Chaney, 77, a retired professor of biochemistry and biophysics at UNC Chapel Hill. “He didn’t talk a whole lot about what he did at work.”

The elder Chaney later served as dean of N.C. State University’s College of Textiles—where he oversaw the establishment of the country’s first doctorate in fiber and polymer science—from 1967 to 1981. He died at 88 in 2004, and Steve Chaney tells me his father never thought of himself as the man behind the invention of AstroTurf. He was much prouder of another project he worked on at Chemstrand—the development of an artificial heart valve.